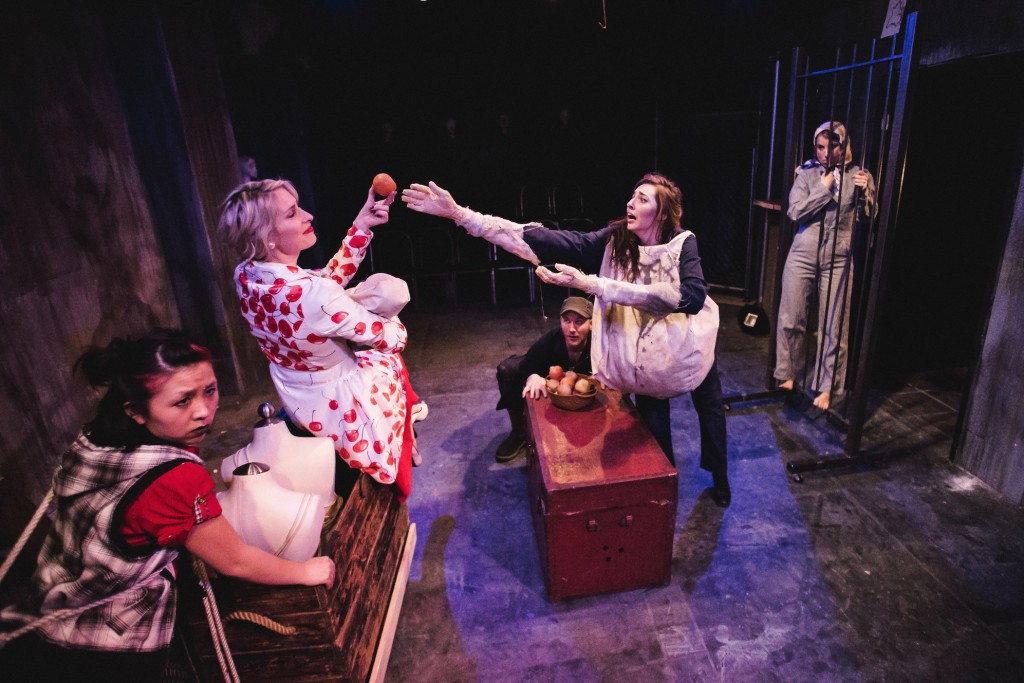 Anyone looking for a primer on the kind of work that Oracle Theatre does would be well-served by seeing “Circle-Machine.” Steeped in the language of the European stage, “Circle-Machine” is an epic fable that sits very comfortably in the storefront company’s rhetorically populist but stylistically expressionist wheelhouse. It is, get ready for it, an original adaptation by Emma Stanton, Nigel O’Hearn and director Thom Pasculli of the Charles Mee play “Full Circle,” which is itself an adaptation of Bertolt Brecht’s “The Caucasian Chalk Circle” which is itself an adaption of Li Qianfu’s fourteenth-century play, “Chalk Circle.” It is also a treat.

Set in 1989 during the fall of the Berlin Wall, the story opens during a production by the dramatist Heiner Muller (Kevin V. Smith) and the Berliner Ensemble. As the Soviet regime literally begins to crumble around them, the wife of a high-ranking official (Simina Contras) shoves her baby into the arms of an oblivious American tourist named Pamela (DeChantel Kosmatka). Struck with a sudden urge to do good (in the style of many an American interventionist both before and after her), Pamela strikes out for the border alongside her new punk-rock au pair Dulle Griet (Stephanie Shum) determined to smuggle the child home. Accompanied by the powerfully sung folk narration of actor Pavi Proczko, Pamela and Dulle Griet encounter many troubles, and troubling revelations, along the way. Happily for the audience, Kosmatka and Shum are both delightful: ideal travelling companions for a tough, sometimes difficult road.

As is common with Oracle shows, Pasculli and set designer James Ogden create an all-encompassing mise en scene. In this case it’s a prison: all gray concrete and chain-link fences. The action, staged alley style, moves fluidly from scene to montage to set piece and back. A journey across a rickety rope bridge is particularly affecting, as is a late, long monologue from Smith’s Muller castigating his lack of courage, as a man as well as an artist, in the face of real danger and oppression. Those two moments stand out as stark contrasts: one intimately human, the other boldly theatrical, and both of them exquisitely realized. (Alex Huntsberger)