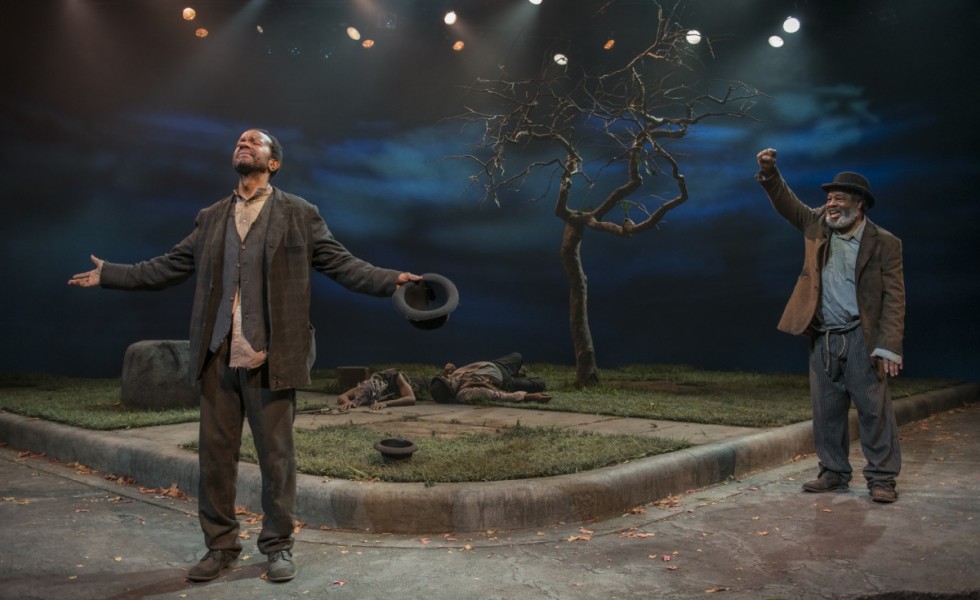 Samuel Beckett’s “Godot, ” as presented by the Court Theatre’s resident artist Ron OJ Parson, has all of the existential tremble without the hard edges of complete despair. Quite the opposite of dark turtlenecks and French cigarettes, Parson’s all-black cast offers an array of emotional leads that highlights the most compelling aspects of the script’s humor. The overall themes are still there: Beckett’s unique view of the world as absurd with no meaning or purpose; the human condition; resilience in relationship; others as hell; it’s all still there. But it is sewn tightly under real embedded comedy and drama, foregoing the usual blend of high allusion and close reads, mixed together brilliantly by Estragon (Alfred H. Wilson) and Vladimir (the wise veteran Allen Gilmore) who employ both classy wit and bountiful rancor.

Estragon and Vladimir are bums in the country waiting for the mysterious, never present but always in mind, Godot. In each act it is announced that Godot will not be coming today, but that he will show the following day. This is the heart of the Beckett play: Is there a god, will he ever come, does mankind persevere in the absence of the overseer? And by virtue of the characters’ progression, their hilarious attempts to move on, the answers for Beckett’s haunting questions are presented, mostly, optimistically.

Lacking a traditional narrative, the characters spend their two days bickering, taking part in inconsequential acts until interrupted halfway through the first act by the demonic Pozzo (a large, embodied AC Smith) and the reticent Lucky (a modestly subtle Anthony Lee Irons). Lucky is dragged about by a long rope, enslaved with Pozzo’s chores. He is a servant and more; Lucky delivers the tortured, tongue-twisting philosophical monologue that may be the high end of Beckett’s message. Really, Pozzo and Lucky break up the dramatic interplay that reveals the depth of Estragon and Vladimir’s friendship. It is their interaction that draws out the unique, nostalgic relationship between the main characters.

The set is less-than-provocative but the costumes (everyone in hats) offer their own voice. Parson and cast have taken this heady three-hour philosophically dutiful drama out of the ivory tower, and created an enjoyable, entertaining piece. (Mark Eleveld)