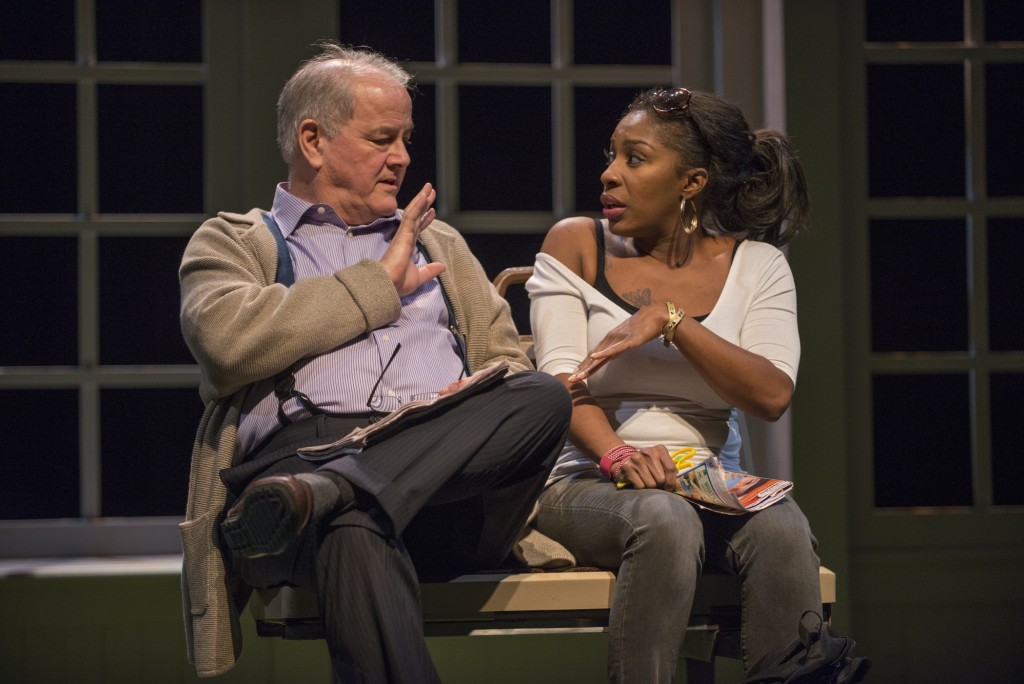 About midway through act one of Bruce Graham’s “White Guy on the Bus” (now receiving its world premiere at Northlight Theatre) veteran inner-city teacher Roz (Mary Beth Fisher) states that her students are too busy slashing each other to engage in any self-cutting (like they do in the more affluent, whiter schools). This is a memorable moment, for it is one of the few times that the play, instead of simply reinforcing racial stereotypes, actually expresses something novel.

Yes, some of the presented stereotypes are not often talked about in polite circles (like the racist principal who is, gasp, African American) but they exist nonetheless. So you have the maybe do-gooder older white man (Francis Guinan, doing everything possible to make this script work) who, when pushed past his limits, talks about African Americans always having excuses, along with the incredibly naïve Molly (Amanda Drinkall) appearing shocked by the relatively low expectations Roz has for some of her illiterate students.

There is also the surrogate son (Jordan Brown), hoping to earn a dissertation based on his analysis of minorities, appearing more successful in commercials than they are in real life. These characters are so clichéd and devoid of depth it is hard to take anything they say seriously, let alone be moved by their struggles. A violent and surprising twist occurring just before intermission manages to shake things up and nicely explain why a white guy repeatedly takes a bus to jail even though he has no one to visit there, but the action stagnates in the second act with the non-linear plot not developed enough to be thought-provoking.

The culmination of it all does little more than make the viewer uncomfortable. Patrese D. McClain puts in a very moving and emotionally charged performance as Shatique (a hardworking and loyal young mom who visits her imprisoned brother every Saturday), but it is not nearly enough to save this production. (Noel Schecter)