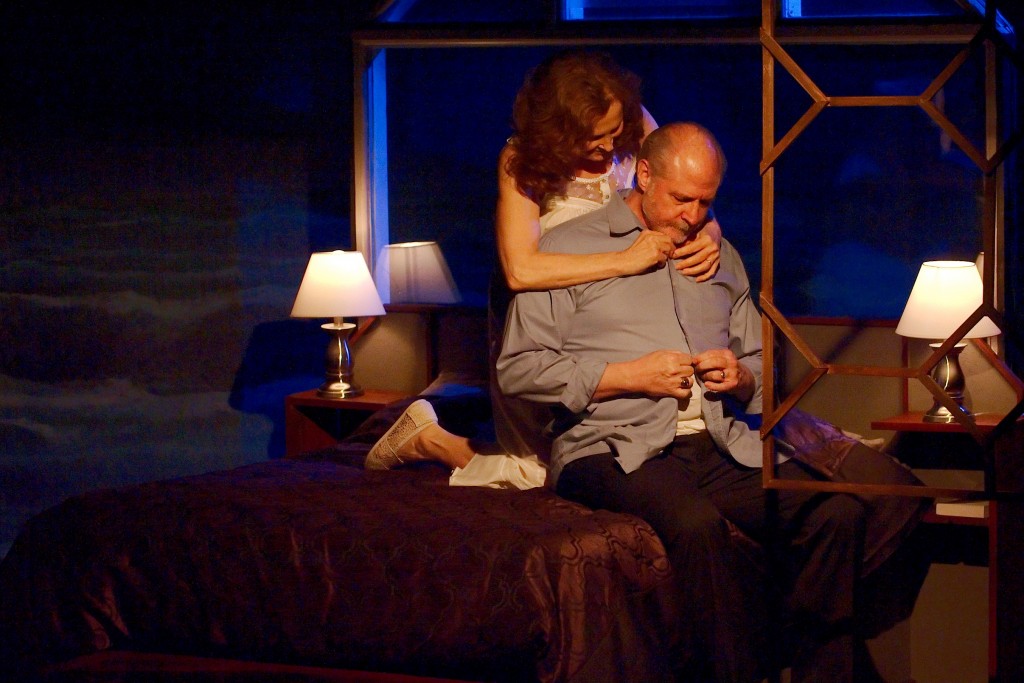 The angst of family life is well documented: The rough and tumble bemoaning of love from fathers to sons, and mothers to daughters. There is an element of need. There is also the factor of expectation. But it can also be the thing that tears us apart. Director Ann Filmer brings to life this inner familial turmoil with Stephanie Alison Walker’s strong and disturbing play “The Art of Disappearing, ” premiering at the delightfully intimate 16th Street Theater.

In Walker’s very human play, Melissa (Amanda Powell) is called back into the family unit after two years of exile as her fiercely intelligent and proud mother Charlotte (a brave and beautiful performance by Joan Kohn) begins a tragic downfall into the pit of dementia. Melissa brings back-up in the form of her “fiancé” Jack (Andres Enriquez). There is invention in this brief reunion, which then devolves into anger, lies and regret. All of this is calmly handled by the well-intentioned, but ultimately emasculated Henry (Tom McElroy).

Kohn’s Charlotte is overly demonstrative, but she does have a closer truth to Melissa’s lifestyle. For Henry, none of it matters. He continues to take blow after blow from the matriarch and daughter alike, holding onto that thread he believes will bring deliverance. And there you have it: Henry is in denial, Melissa holds a grudge about her mother’s accurate assessment and, mostly, Charlotte’s disintegration into dementia rears its ugly head. The mastery of interplay between players comes to life in the scenes where Charlotte and her illness take center stage. Charlotte’s “present” moves rapidly and Kohn is hot with her mood swings. And while Melissa is home at her father’s request (a paid intervention), it is the cruel fate of the disease that eases Melissa’s take on her heavy-handed mother. As Charlotte, Kohn is up to the task, especially in one unforgettable soul-baring monologue that is later extended by a hot bed of eroticism that the emotionally debilitated Henry cannot handle.

Filmer’s direction cuts to the bone of Walker’s play, and when the tension is appropriately applied throughout (it was a smidge uneven on opening night), the inner muck of family struggle is revealed beautifully. (Mark Eleveld)