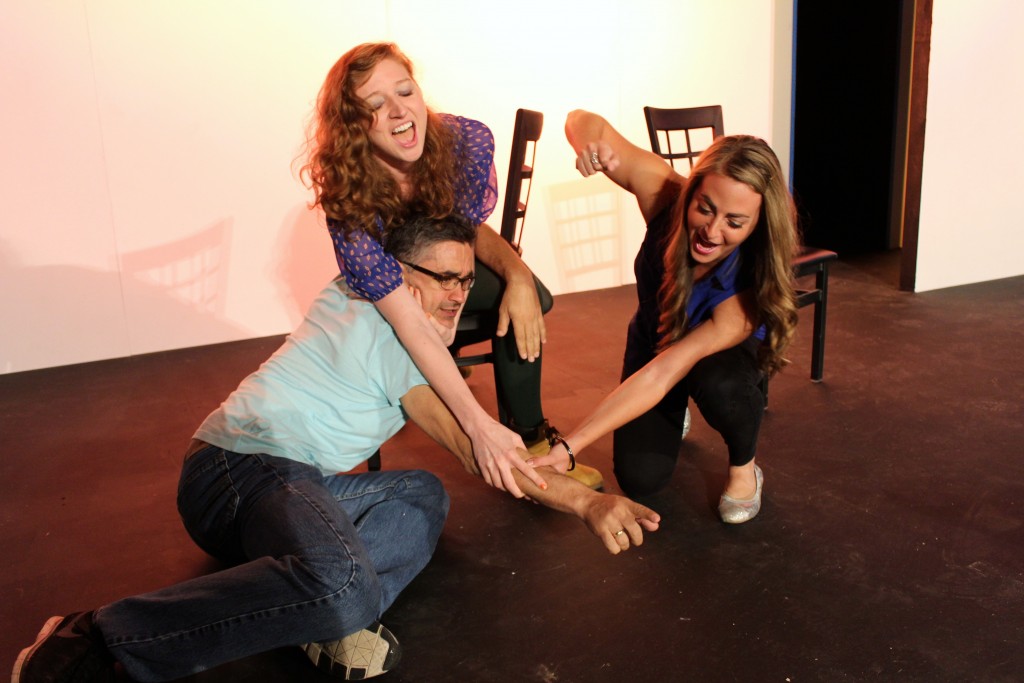 The show’s setup is simple: the Card Czar (director Angie McMahon, also acting as emcee) reads a Cards Against Humanity prompt and if an audience member—all given three response cards upon entering the theater—thinks one of their cards is the best answer to that prompt they hold up their hand and are brought up on stage to read the card to the audience. There are two teams and each team gives a series of scenes based on either (or both) cards. Whichever team gets the most points wins. Fun stuff, right?

The “Comedy Against Humanity” website clearly states that “Audience members who show up drunk or otherwise intoxicated will be refused entry and their tickets will not be refunded.” A valid restriction for a rowdy improv show in Wrigleyville. Who wants belligerent audience members ruining a show? But Friday night the biggest interrupting force was one of the performers. She consistently talked over the emcee, yelled at the audience and even called a “time-out” mid-scene to awkwardly threaten another cast member for a perceived slight. Properly managed, this kind of acting out could potentially enhance the comedy, especially for a show like this, but here it just felt unnecessarily aggressive, with McMahon frequently shouting down spats so the show could move on.

On a seemingly unrelated note, about a mile south of Under The Gun Theater, there’s a little fast food joint called Wiener Circle. It’s famous for how the employees berate, belittle and otherwise deride their customers (and how the customers give it back). “Comedy Against Humanity” has a little bit of that derisive theme in its veins. The initial introduction of the show involves a description of how the show works and a call to “Go fuck yourself!” if you didn’t collect the right set of cards before sitting down. All of that works. But imagine if you were trying to order your hot dog at Wiener Circle and the employees just berated each other… not as entertaining.

At one point a physical fight broke out mid-scene. Sure it was partially comedic, but it came mid-joke and there was enough angry tension there to make it much more awkward than funny. Maybe this cast is pulling some Andy Kaufman-like hijinks for their own gratification, but if so it’s a strange fit for an otherwise straightforward show. This is solid comedy for the masses, with the Cards Against Humanity card deck forcing performers to take the kind of suggestions that audiences love and improvisers usually abhor: “My vagina,” “A vagina that leads to another dimension” or “Pandora’s vagina” (there were a lot of vagina-themed scenes at this show).

As with all improv reviews, I would be remiss if I didn’t note that every show is different. This is an open run with a rotating cast and no two performances will be alike. I should also point out that all six of the performers I saw were quick-witted and extremely funny (even the surly one). I was in an all-but-sold-out audience that (for the most part) was loving it and the show is so popular that Under The Gun will be adding Saturday nights to their performance schedule starting next month.

Still, I’ve never seen a show go as aggressively, distractingly, spectacularly off the rails as this one did, but maybe that’s part of the draw. There are lots of places to get a hot dog in Chicago, but Wiener Circle gives you a hot dog with extra anger on top. Maybe “Comedy Against Humanity” is the place for angry comedy. (Zach Freeman)