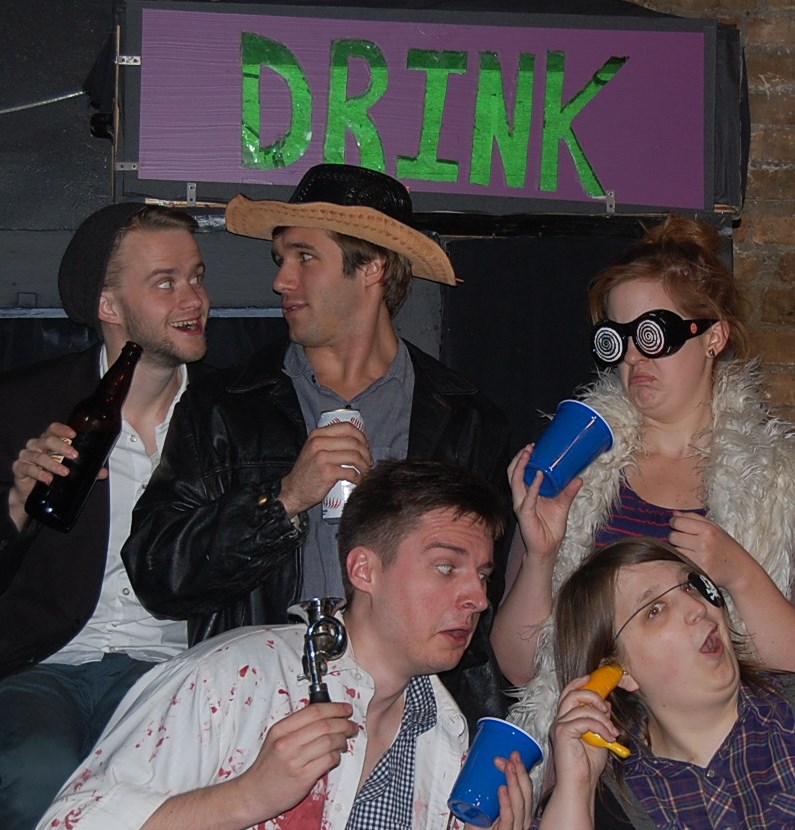 At the beginning of “DRINK! The Sketch Comedy Drinking Game—Chicago Edition,” the performers set a couple of stringent ground rules: you must drink, no puking (complete with directional info on where you can puke) and don’t be an asshole. These set the tone for a show that is as serious as the disclaimers. Corn Productions isn’t trying to go over your head with much in this show. They may, however, try to go through your liver and into your blood stream (biological process not fact-checked) with an impressive number of scenes that call for a drink per mention of a specific phrase or sound. Full participation in the games could potentially lead to a broken rule, but at no point does the cast allude to disapproval of more boozing. So, follow the rules, or at least puke in one of the designated toilets.

The show starts with an opening song and dance that I can’t remember because, well, I played the fucking game. The first actual sketch is some of the cast’s strongest material with impressions of Jason Sudeikis, Kathy Griffin and Mike Ditka—all of whom are trying to make it onto David Hasselhoff’s “Baywatch—Chicago!” Kallie Rolison’s Kathy Griffin is as on-point as Nifer Honeycutt’s Ditka is utterly ridiculous. No judgement; Ditka pops up a couple times throughout the show, gorging a hot dog drawn from his shorts and expertly hawking his special Ditka wine (“Wine is like a beer made out of grapes”).

The focus of the show is Chicago-based everything, touching on the inevitable vote for Rahm, unavoidable dry-humping on the CTA and dibs on street parking after another snowstorm. The simplicity is almost too apparent, though the show’s best moments are when it steps away from the drinking game and plays on other facts of Chicago life. “Thirty seconds of bad improv” plays out delectably for anyone who has had the inauspicious experience of bearing witness to thirty minutes of bad improv. While brief, the concept is both clever and well-executed. It sets up a sketch of “Improv Intervention” which is where the details of the show become murky because of the escalated volume of laughing and drinking.

If retaining brain cells, or even thickening the mucous walls of said cells (biological fact not checked) is what you need, or if you are sensitive to the improv establishment, this show may not be for you. Chicago may be an improv city, but “DRINK!” makes the case that sketch comedy has a place for those who want some laughter and levity, puking-drunk or not. (Logan West)