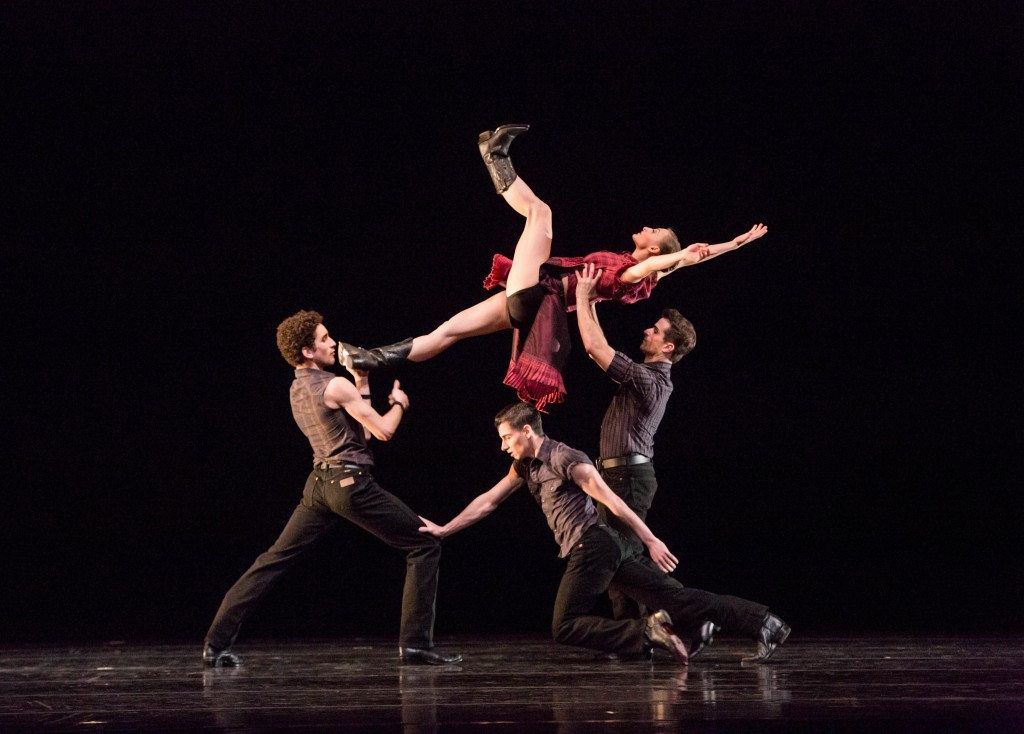 “Unique Voices, ” at the Auditorium Theatre, adds three strong contemporary pieces to the Joffrey rep in a program that strikes a gratifying balance between classicism and risk. The curtain opens on Stanton Welch’s “Maninyas”—a small ensemble piece that moves from strong, sculptural shapes to whirling abandon as it traces the path of growing emotional intimacy. The second section features a series of challenging lifts that hover in the protracted silence between chords in Ross Edwards’ “Maninyas Concerto for Violin and Orchestra.” Lighting by Lisa Pinkham ripples over the women’s ankle-length dresses and massive “veils” hanging upstage. The fabrics in both costume and set are active characters in Welch’s piece. As dancers burst into dervish spins and restless pony steps in the third movement, shafts of light descend on them from above and the veils fall.
James Kudelka’s “Man In Black,” set to six songs from Johnny Cash’s “American” recordings, drew some curious murmurings from the season-ticket-holder seats before it began; it was images from this piece that the Joffrey chose for the program and posters: dancers in jeans and cowboy boots, feet flexed, high-kicking with bent knees. Kudelka’s tribute to Cash and American folk/country unfolds plainly and simply, without a trace of irony or anxiety about stomping, ambling and often musical theater-esque indicating through a series of songs that are powerful for their unabashed sincerity and lack of adornment. In “Four Strong Winds,” the ambling walk of the four dancers evoked an expansive landscape—a slow and contemplative road trip across the great plain of the stage. During Cash’s cover of “If You Could Read My Mind,” dancers took turns serving as puppeteers for each other, slow-mo manipulating a partner’s body through bathetic enactments of Gordon Lightfoot’s lyrics (which a man behind me charmingly couldn’t help singing along to here and there). The choreography in “Hurt” was as stripped down and emotionally raw as Cash’s voice; the dancing of the central, self-destructive figure in the piece—performed with courageous commitment by Edson Barbosa—represents one of the more daring performances staged by the Joffrey Ballet in recent years.

The questions about ballet that may have nagged a mind or two during “Man In Black” are overtly pulled apart and riffed on in Alexander Ekman’s big, brash, playful, crowd-pleasing “Tulle.” This is Ekman’s wittily composed love letter to ballet—the first piece the heretofore-Modern choreographer made for pointe—and he pulls pigtails on delivery. Through video, dancer interviews, stage-sound recording and smoke machines Ekman pokes at the illusions of the form—ease, weightlessness, silence (at least from the dancers)—and visually asks what’s with the shoes? The arm positions? The decorum of the audience? How did this stiff, courtly dance turn into popular entertainment? Why do dancers still love doing it? The result is a joyful, downright hilarious celebration of ballet that ends the show on a bang. (Sharon Hoyer)