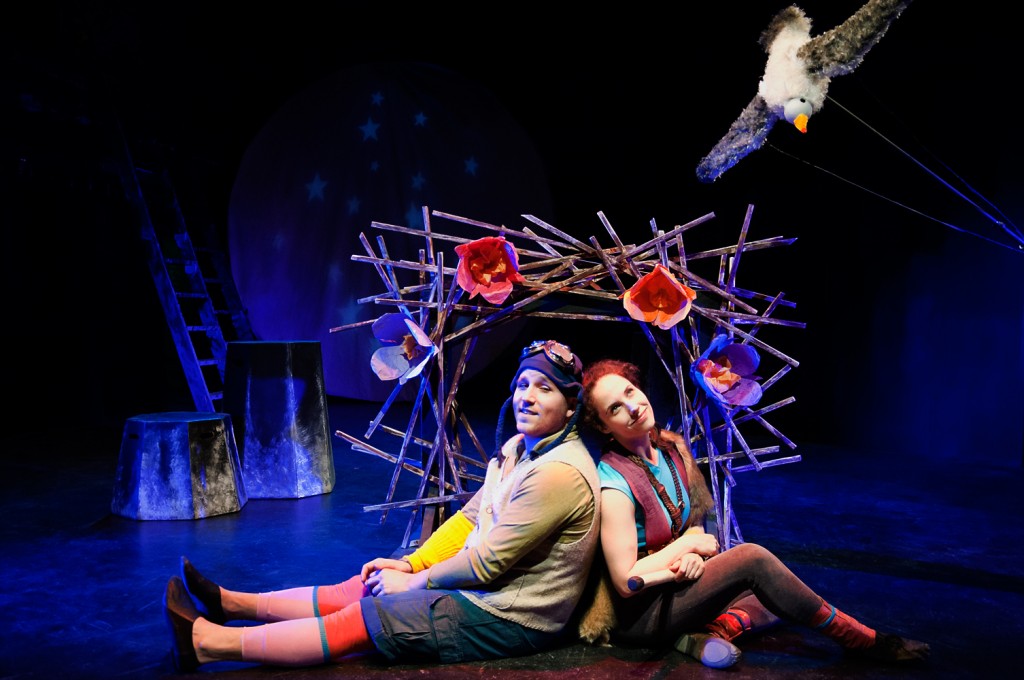 Based on an Icelandic children’s book by Andri Snær Magnason, “Blue Planet” revolves around a celestial body entirely populated by kids who enjoy the simple beauty of life and live forever in a state of perpetual youth. The action of the play really gets going when a space-traveling adult Jolly-Goodday (Michael T. Downey) arrives on the scene, bringing capitalism with him. This brings havoc to the idyllic setting by creating demand for products and services that weren’t needed before, and putting a price on happiness. The price? The children’s youth.

While presented in a style that emulates European physical theater performances, the script is unfortunately text-heavy, dense and talky. Wm. Bullion’s direction clearly attempts to take the production down the path of shows one might see at Redmoon, TUTA or The House. However, the execution is hindered by the script itself, combined with a cast that seldom seems comfortable in their own skins or fully committed to the characters of the children they portray. We watch as they watch themselves playacting at being children.

There are times when the concept does come through effectively and crosses into being beautiful. A forest scene’s ominous environment is created by the entire ensemble’s physical and vocal work. Sarah Scanlon’s aerial choreography, and its execution by Joshua Davis (in the role of Brimir) and Scanlon herself (in the role of Hulda), is an impressive thing of beauty. Amber Robinson’s hyena and Tom McGrath’s bear are also effective and refreshing.

As a parent, I would not have taken my daughter to this show at an early age. Much of the script’s heavy-handed sermonizing would have gone over her head. And now, as a teenager, the show would likely bore her. It attempts to build something that sings to young audiences, but doesn’t assemble the pieces in a harmonious way. This is sad in that its message of being good to the planet—and the people who live upon it—is a moral worth spreading. (Christopher Kidder-Mostrom)