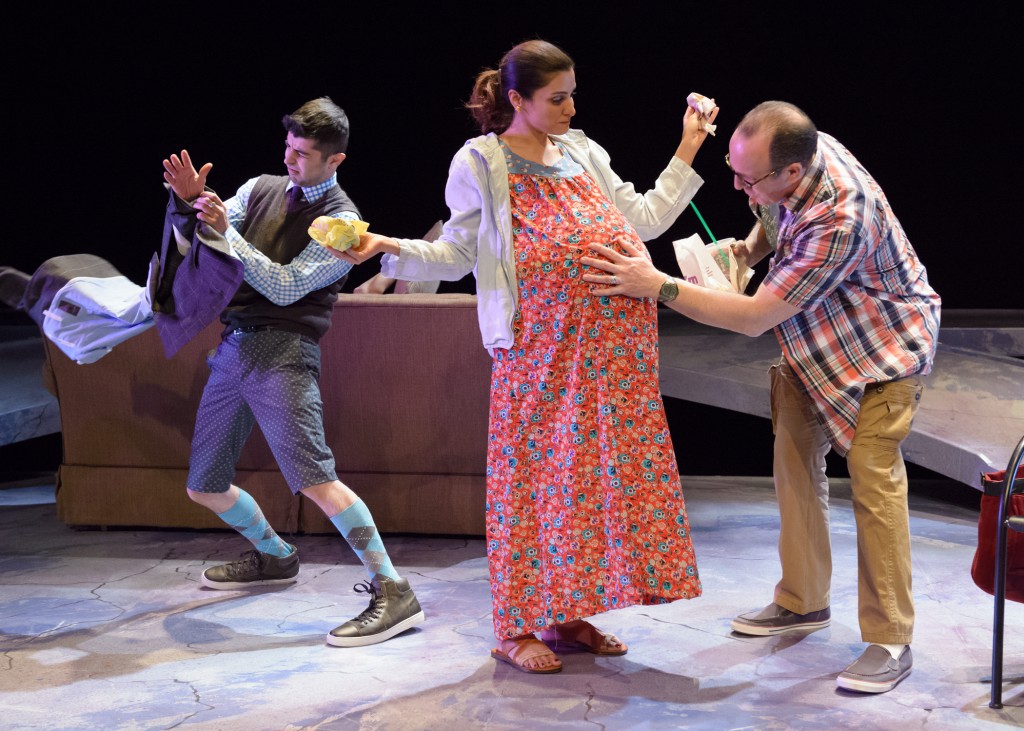 Lauren Yee’s “Samsara” is sort of like an inverse of history; it begins as farce and ends as tragedy. However Victory Gardens’ world-premiere production seems to forget that the tragedy part is meant to be a surprise. One very large design flaw—literally large as it consists of the entire set—creates a dark and murky tone that works counter to Yee’s playful one. A large black scrim covers most of the back wall and, combined with the bare stage beneath, creates a literal void that sucks the energy right out of it.

And it’s sad, too, because both Yee’s script and the play’s vibrantly generous cast deserve better. Lori Myers and Joe Dempsey play a perfectly imperfect couple by the name of Katie and Craig. They want kids but are unable to have any—cervical tumor—and they aren’t able to afford an American surrogate, so they decide to off-shore. Through a service they hire a woman in India named Suraiya (Arya Daire) to carry their child to term.

When the date arrives, Craig has to go to India alone. Katie doesn’t fly—for reasons revealed later on. Craig strikes up a friendship with Suraiya, who mostly spends her time either studying for medical school or conversing with Amit (the very charming Behzad Dabu), who isn’t real. He’s a projection of the child inside her. Katie meanwhile also escapes into a fantasy world, carrying on a torrid (if imaginary) affair with a very lithe, very sultry, very French projection of her and Craig’s appointed sperm donor (Jeff Parker, well cast).

As is customary in the work of director Seth Bockley, the play fizzles and pops with a twee, screwball energy, bouncing back and forth from fantasy to reality. Dabu best embodies this spirit with an Amit that ponders, kicks, pouts and shouts, all with equal gusto.

However, all of this verve is made tinny and small by the blank, black void of a set that they are stuck upon, like hearing music coming out of someone else’s headphones.: you can still hear the tune, but you lose the full effect. (Alex Huntsberger)