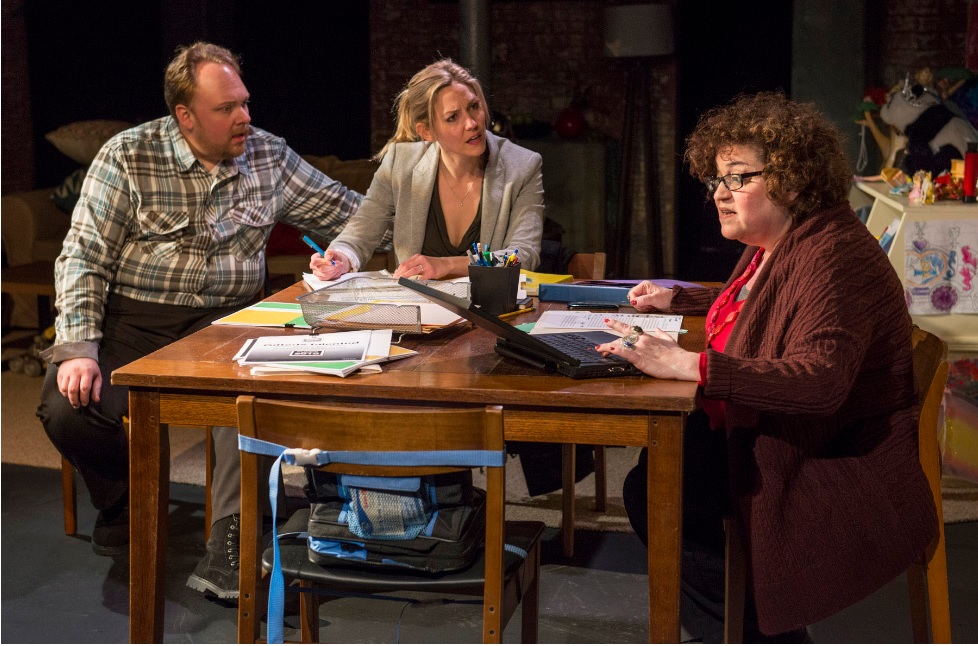 When worrywart mother Alex (Katherine Keberlein) first hears the term “gender variant play” for her son Jake’s predilection for playing princess make-believe, she hears it as child psychiatry mumbo-jumbo. And she’s only half wrong. The term is being pitched by her son’s principal, the menschy but politically astute Judy (Cindy Gold), as a liberal buzzword that can help Jake get into one of Manhattan’s exclusive private schools. (The boy is four, by the way.) However it also has the virtue of being true.

Jake does like to play the princess. A lot. To the point that his birthday wish is that he become a girl. What starts as a game of kindergarten real politik quickly becomes a stroll through the minefield of gender identity. The problem with Daniel Pearle’s script is that even in the focused, wonderfully acted production that director Keira Fromm has delivered at About Face Theatre, it can’t navigate its own identity crisis between yuppie parenting satire and earnest dissection of parental open-mindedness.

The show displays a sense of humor toward the ludicrousness of a four-year-old child having “entry exams” for exclusive private schools, but it is also a story about two people who have to take them seriously. Their child’s future actually depends on it. As such, talented actors like Keberlein and Michael Aaron Lindner, who plays her beta-male psychiatrist husband Greg, are presented with entire scenes that amount to “well-off white parents freaking out about where their kid goes to kindergarten.” There’s a reason that that scenario didn’t make the final cut for Polti’s thirty-six dramatic situations: it’s about as interesting as watching someone describe the consistency of their stool.

The genuinely interesting question of Jake’s gender identity is lost for long stretches, buried underneath a storm of entitled whining, backhanded remarks and just straight-up unpleasant yelling. Alex especially is painted by Pearle as a Colonel Kilgore-level helicopter mom who several times left this reviewer’s hands unconsciously curling into a strangulating motion from sheer frustration.