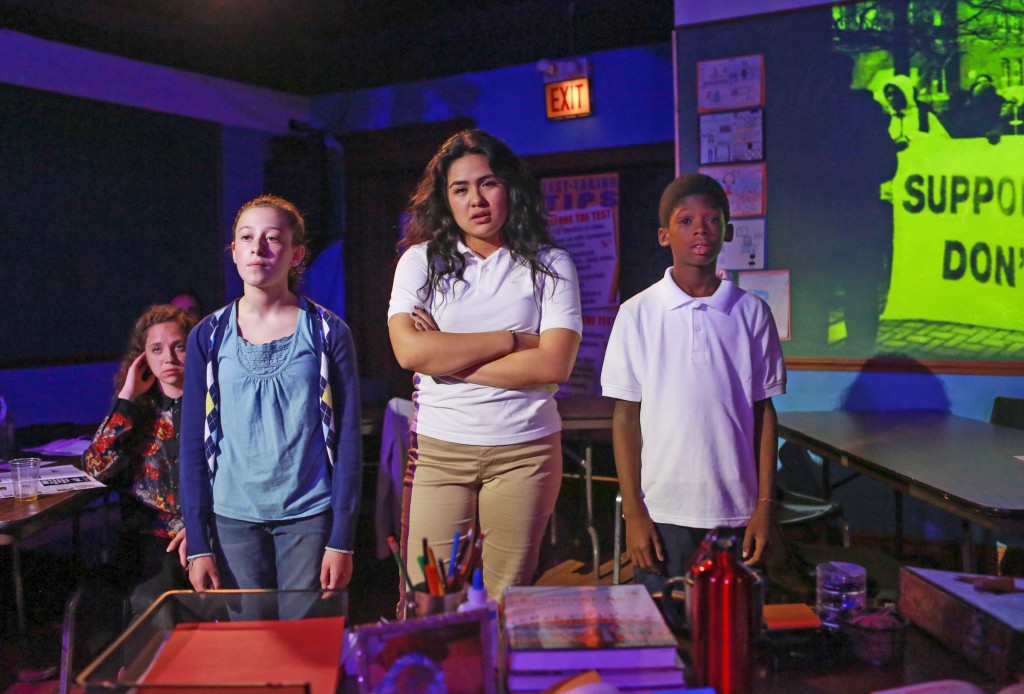 In 2012 the Chicago Teachers’ Union went on strike for a slew of reasons, including objecting to teacher evaluations based on student performance, teacher and school staff layoffs, and the risk of school closures. At the end of the 2012-2013 school year, in spite of the strike, more than 2,000 Chicago Public Schools employees were handed pink slips and forty-nine CPS schools closed their doors. Then, at the end of the 2013-2014 school year, an additional 1,000 CPS teachers and staff members were let go. Collaboraction explores what these changes have meant for parents, teachers and, arguably most importantly, CPS students, in the remount of “Forgotten Future: The Education Project,” co-directed by Sarah Moeller and John Wilson.

The set, designed by Ashley Woods, mimics typical school classrooms. Chalkboards adorn the walls along with class spelling words, printed charts about test-taking tips and samples of student work. The play is performed in-the-round, which serves the show well, given the variety of scene settings—from picket lines, to school board hearings, to three particular students’ homes, highlighting their stories.

Carolina Rodriguez (Esmeralda Ayvar-Perez, a Lane Tech HS sophomore) is a high-school junior who is struggling with academics and the stress of standardized testing. Lauren Perry (Leah Aberman, a Lane Tech Academic Center seventh grader) is an overachieving eighth grader who feels enormous pressure to get into one of the city’s selective-enrollment high schools. Issac Tate (Tyrese Hall, an Alain Locke Charter School sixth grader) is an elementary school student forced to attend another school when his neighborhood school closes.

Whether you’re an educator or someone who knows little to nothing about the Chicago education system, this show touches on some of the biggest frustrations felt by those on the ground every day. “Forgotten Future” asks, “If we’re not investing in our children, what are we doing?” Unfortunately, audiences may be disappointed with the lack of answers to such an important question. A live stream of each performance is offered for five dollars at gigity.tv. (Mary Kroeck)