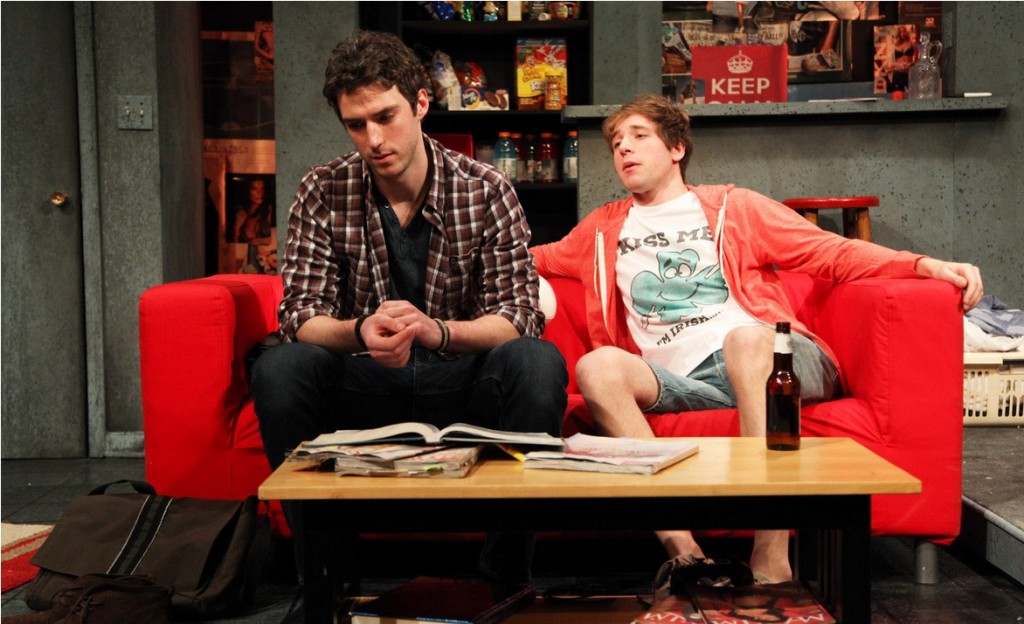 Describing what Paul Downs Colaizzo’s “Really Really” is really about is not easy. The play is a Molotov kegger of sex, class, politics and violence. It’s a finger, or maybe another ruder appendage, stuck right in your face and daring you to slap it away. Describe the play as an indictment of “enlightened” narcissism, ambition and class warfare and you leave out that its pivotal event is a rape. Now try saying “it’s a play about rape but it’s not really about rape” out loud without wanting to punch yourself in the face.

That the play refuses to play nice on this (it doesn’t play nice on anything) is going to make a lot of people really really (really) angry. And I also think those people should go and see it. That director James Yost and Interrobang Theatre Project have delivered a dynamite production certainly helps.

The story unfolds in the few days following a college party thrown by senior boys Cooper (Michael Holding) and Davis (Ben TeBockhorst). At said party Davis had sex with Leigh (Kristen Magee) who is in a serious relationship with Jimmy (Tommy Beardmore), Davis and Cooper’s toolbox of a teammate. Neither Leigh nor Davis are eager to talk about the encounter. Davis even says he was totally blacked out. But once Jimmy finds out, Leigh tells him that Davis raped her. Things explode from there, which only creates more smoke. Everyone has doubts but they only serve to highlight everyone’s certainty in insuring they’re not the one who gets burned.

In a cast full of strong performances, Magee proves the strongest. She allows Leigh’s many contradictions to shine through without ever compromising the righteousness (self- or no) that drives her. Holding and Beardmore are also notable, the former for embodying a lovable douche and the latter for the same minus the lovable. Yost keeps the action tight and the actors focused, while Jeff Kmeic’s gun-metal, poster-spattered set creates an atmosphere equal parts rave and dread.

Describing this play may not be easy, but telling people whether they should see it is very easy. Because they should. Really. (Alex Huntsberger)