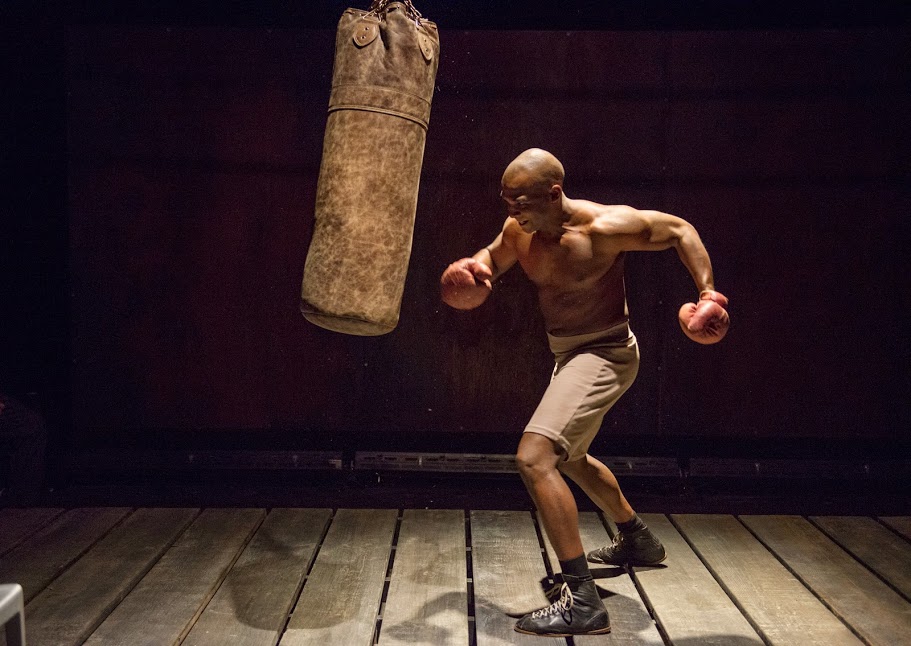 American Theater Company’s production of Marco Ramirez’s “The Royale” has as much heart as its title character Jay Jackson (Jerod Haynes). Inspired by the life of Jack Johnson, the first African-American world heavyweight boxing champion, Jay has gone on to defeat every worthy African-American opponent including Fish (spiritedly played by Julian Parker), a young hopeful who is the only fighter Jay believes is worth his salt. He hires Fish as his sparring partner to prepare him for the fight that will change the course of history.

It’s a fight that only Jay believes he can win. Everyone else seems to think the idea is far-fetched, including his longtime boxing promoter Max (Philip Earl Johnson) and his sister Nina (passionately played by Mildred Langford) who comes with haunting news. It is his trainer Wynton (played with great composure by Edwin Lee Gibson) that reminds him he is alone in the ring, thus the ultimate decision is his.

Director Jaime Castañeda has taken Ramirez’s script and cooked up a seventy-five-minute ball of fire whose flames never wane. The choice to use Jeffery Freelon and Eric Gerard for the rhythmic effects we hear throughout the story in place of actual fight scenes is both inventive and economical.

As the lead Haynes has the charisma of a champion and exhibits in his moments of silence the emotional depth in Jay that is sometimes lacking in the material. While Ramirez has managed to write a script with the perfect balance of spunk and wit, it is not without limitations. Jay’s reason for fighting is problematic. He chooses to fight for his sister who wanted to look like the white models on ads that were seen in a pharmacy back home. A subject as dense and expansive as African-American identity cannot be tackled with the care and sensitivity it deserves in the superficial exploration Ramirez’s script gives it. In fact, it is a slippery slope to do so, because of the pain these inaccurate assumptions can lead to. (Loy Webb)