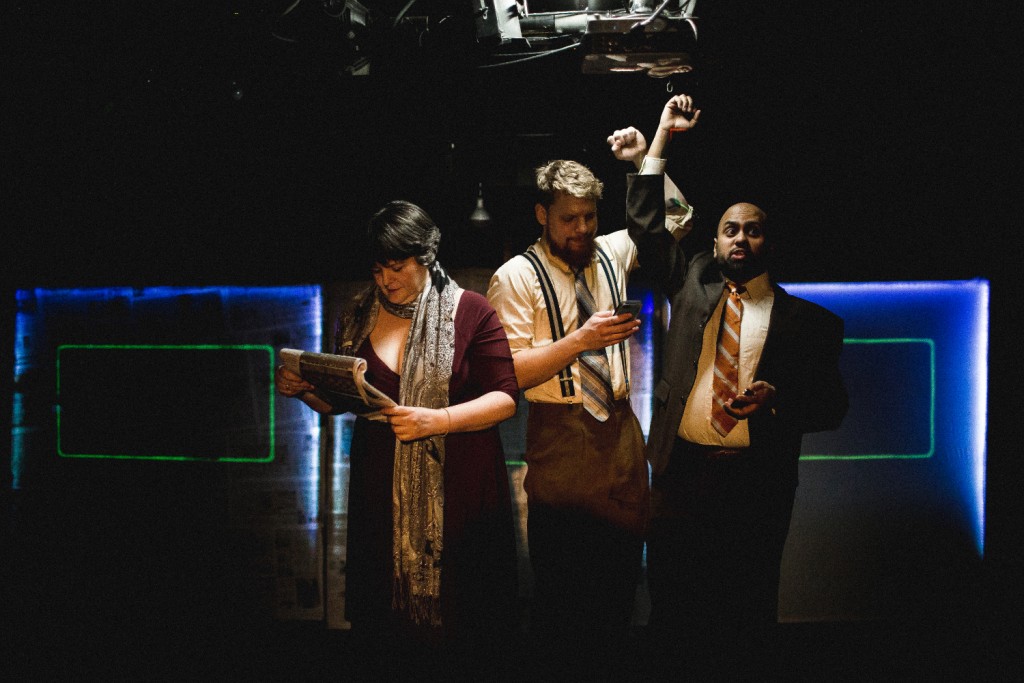 Decades ago when the Neo-Futurists were new at what they do here, I once duplicated scripts or some such documents for them in my arduous and artless role at the Kinko’s of Illinois flagship location. Some member came in to retrieve the copies when I mentioned that my own writing was very possibly the sort of work they might wish to produce. I was told with a dismissive and arrogant air “we have enough writers.” I confess there’s no connecting that offending individual with the Neo-Futurists’ current production. I’ll even damn my intro as unethical, while also excusing it as wholly appropriate. See, the current production “Redletter” is largely about journalism ethics.

And see it you should. Why? Because it’s entertaining, and ain’t that why you go to the theater? The Neo-Futurists seem to think so; all the shows I’ve seen there over the years have placed a premium on actually delivering an enjoyable experience. That’s not to say this show is slight. It tackles weighty issues of journalistic integrity and responsibility, as exacerbated by the immediacy of new media. But there’s really nothing new under The Sun, at any Times, or on this Daily Planet, and playwright Lisa Buscani knows better than to really place the blame for rampant lapses in reporting righteousness and accuracy on technological advances in the (near ubiquitous) availability of the news and the speed of its delivery.

The show indulges plenty of fetishistic nostalgia for the pre-internet means by which we used to consume the news, and offers an enshrinement of the idealized old newsman—not in the form of Edward R. Murrow or even Cronkite, but in Robert Redford’s big screen Bob Woodward. It’s an unspoken irony that the central character of this production, bemoaning the lack of Truth in the news business, holds a Hollywood take on a Watergate reporter as the exemplar of what is right and good. Coverage of the Boston bombing is assailed for its reckless rapidity, but there’s nothing newish about risking accuracy in the rush for a scoop, and we are expressly told sensationalism is indeed a time-honored tradition of the business.

I said this show was fun… and it is. The script contrasts each player’s insights into (and blindspots about) the strengths and weakness of the news business. It does so most effectively when setting this debate in a personal context. Bilal Dardai speaks to the responsibility of presenting and curating stories for future generations by repeating a son’s single-minded interest in trains. Lindsay Muscato admits to being scared off a story by internet trolls. Thea Lux sings of feeling inadequate and superfluous in a world of so many news sources, tweeters and social media “friends.” And Trevor Dawkins takes what starts as a fairly clichéd caricature of 1980s coked-up cowboy journalism as manifested in a fictionalized channeling of a newsman father and pushes it so far, collapsing the whole show into his dark manic energy, that it turns engrossingly hilarious.

In our real fallen world we don’t get thoughtful 1970s Redford or determined Lois Lane, we don’t even get corruption with pizzazz and grace like Charlie Kane. We get the thuddingly lapsed newsface of Brian Williams or perpetual self-parodies like opinion-vomitter Bill O’Reilly. But at least over at Ashland and Foster we’re treated to a smart, lively troupe addressing the importance of the search for authenticity in the presentation of current events and—more successfully and more importantly—providing plenty of laughs in doing so. (Raymond Rehayem)