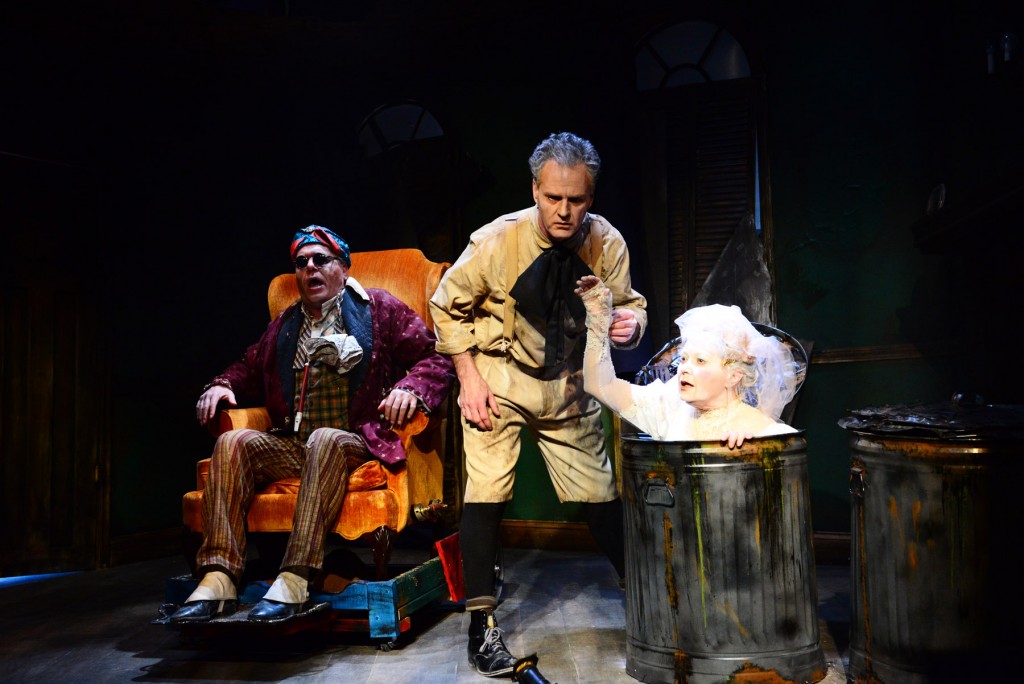 The plays of Samuel Beckett are self-contained worlds. They are shorn of history, context and anything resembling realism: life boiled down to its bone-broth essence. So when director Halena Kays gives us a production of Beckett’s “Endgame” that is itself contained in its own little traveling vaudeville stage wagon, it makes a refreshing amount of sense. And it helps that the set by Elizabeth Bracken along with the lights by Maggie Fullilove-Nugent, costumes by Jessica Kuehnau Wardell and makeup by Nathan Rohrer all look fantastic. And seedy. And a little bit scary.

Kays however doesn’t fully embrace the starkness of Beckett’s vision, and it’s to the play’s benefit. Not only do all the characters speak in the playwright’s natural Irish lilt, but they wear the old-timey vaudeville heart of his style on their sleeve. They mug, they perform, they savor their moment in the (literal) spotlight. They seem of a specific place and specific time, and these glimmers of what once was make their irrevocable collapse all the more melancholic. Signs of children, an extinct species here, abound.

Although his character is most definitely the second banana, actor Brian Shaw gives a standout performance as Clov. He moves like a rusted-out robot clown, always at the beck and call of Kurt Ehrmann’s preening, blowhardy emcee, Hamm. Sean Sinitski and Donna McGough as Hamm’s trashcan-bound parents bring just the right amounts of hangdog loneliness and post-senescent cheeriness. The performances are in tune with each other, all playing the same hauntingly absurdist tune. That tune might not sound like real life, but it certainly sounds like “Endgame.”

The audience is seated as though in attendance at a birthday party. While the metaphor is somewhat obvious (Birth, meet death, and so on) the overall effect is pleasingly eerie. This is certainly not a definitive rendition of “Endgame,” but it doesn’t mean to be. Beckett would certainly harrumph that Kays seems to have too much affection for the character, but his endgame played out long ago. This show is what it is and nothing else. And is so much more welcome because of it. (Alex Huntsberger)