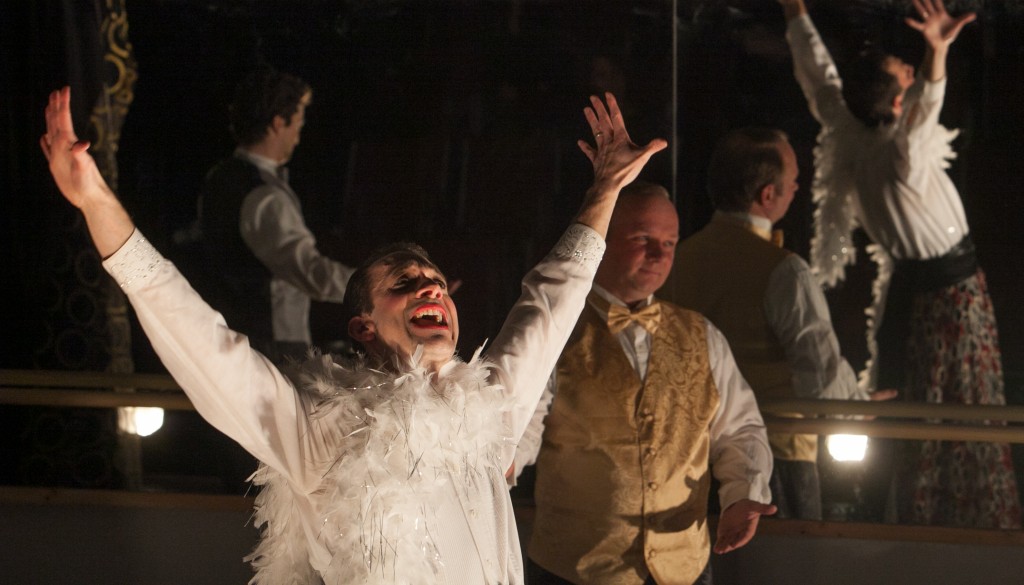 Before the production leaves for New York City, TUTA Theatre Chicago’s “Music Hall” is a show that you should make special effort to get to. Zeljko Djukic’s interpretation of the Jean-Luc Lagarce script (translated by Joseph Long) is unlike anything else you’ll see in this city, refreshingly expanding the audience’s horizon through the pure simplicity of action and inaction.

The beauty of the piece stems from the fact that the audience itself must assemble the pieces of story to find the truth of the tale. When the lights first come up, we are treated to a dumb-show bit of clowning by Michael Doonan and Darren Hill who play the “Boys.” They are preparing a space for the upcoming performance of The Artiste (Jeffrey Binder), an aging, tired drag queen, who presumably had some success early in her career, though how long ago is difficult to determine.

The Artiste’s rather tangential tale is constantly being revised through its telling, as well as the interruptions and musings of the Boys. Eventually understanding comes to mind as the pieces assemble like shards of a mirror, which even when repaired has some ugly cracks visible. This is where the beauty of the piece lies, in its brutality, sadness and rough nostalgia for a theatrical life lived fully. The stark lighting of Keith Parham’s design accentuates the doomed feeling of the show by being at once a callback to the footlights of vaudeville’s glory days and simultaneously capturing the ominous mood created by a flashlight upward cast upon the face of a spooky storyteller.

We watch the company’s arrival, rehearsal and performance—possibly their last one. The Artiste struggles to go on, while her end may be at hand.

Very little happens action-wise within this show, and yet there is vitality in every simple movement made by Binder and his compatriots. That simplicity, throughout this production, creates many beautiful moments that assemble into an even more tragically lovely whole. (Christopher Kidder-Mostrom)