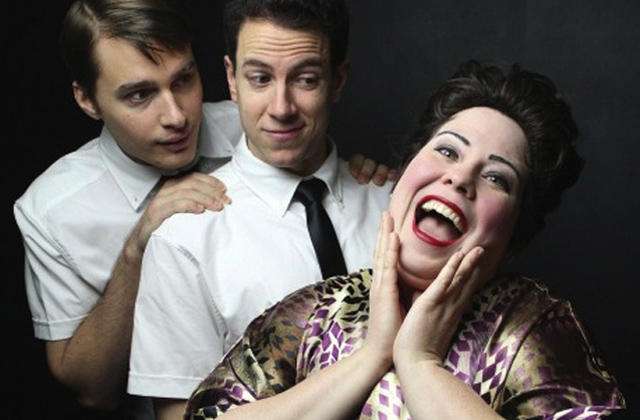 After a successful run at Mary’s Attic, Pride Films and Plays has relocated “The Book of Merman” to the Apollo Theater Studio. The extremely intimate space is terrific for a show that has only three performers. However, for a show that is based upon a woman whose primary vocal quality was “Loud,” as pointed out in a number of pre-show videos of Ethel Merman’s television performances, the space may seem a bit cramped.

While Libby Lane’s portrayal of theater’s great belter may be missing a bit on the volume side of things, she captures the sound and attitude of the musical legend. I’m guessing that David Zak directs Lane to approach the part by sacrificing some decibels as a favor to the audience, and in order to present a more melodious sound. The melodies themselves are easily recognized as poor-man’s versions of songs from “Gypsy” and “Annie Get Your Gun.” The production can’t actually use the original tunes, but these altered versions are amusingly familiar. Because the show is poking fun at “The Book of Mormon,” the first words in the production are naturally “Hello! Hello!” And from that point on, the lyrics tend toward the clever, providing constant laughs throughout.

As far as silly spoofs go, this is enjoyable and fun. It’s not really much more than that, but then it doesn’t try to be. It’s silly, fluffy fun that is best enjoyed by fans of its source material. And yet, as one who doesn’t really know the library of Merman’s work, I thoroughly enjoyed the performance as a whole. Sam Button-Harrison’s turn as Aaron, a conflicted Mormon missionary who wants to be on Broadway, is quite pleasing and his own Ethel Merman impression may be the best in the show. As Jacob, Dan Gold is the stick in the mud foil to Aaron. It’s his transformation that drives the action of the show, and by the time he embraces Merman’s greatness, so do we all. (Christopher Kidder-Mostrom)