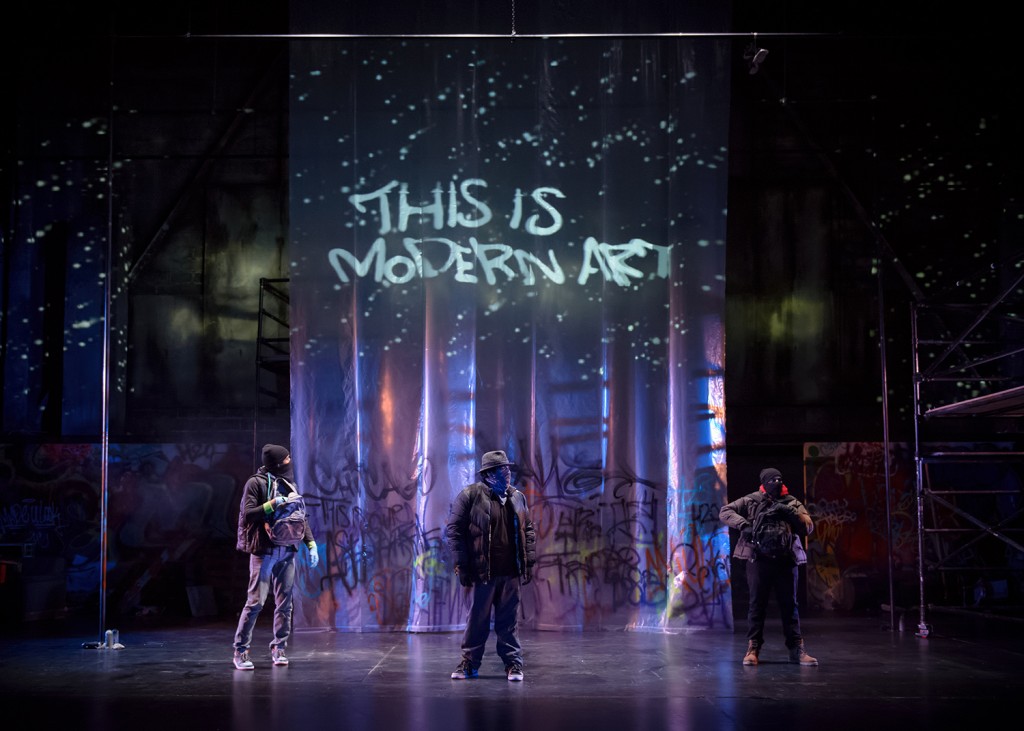 “Vandals cover Art Institute of Chicago’s wall with graffiti,” the headlines read in February 2010. Yet again five of this city’s degenerates decided to add to the already five million dollar bill for graffiti removal. It’s a potential felony, with fines up to $1,500 and possible prison time. Who in their right mind, knowing those odds would risk their personal freedom for such “trash,” as opponents of this practice would label it? The artists who reject the term vandal and are on a mission to prove that what they do is not a generic, knockoff or derivative form of modern art. That it is, in fact, modern art.

The Steppenwolf for Young Adults production of “This Is Modern Art” is an impassioned tribute to these often rejected artists. The play, based on the events of February 2010, is an attempt to fill in the gaps.

Rhonda (Brittani Arlandis Green) and Marco (Chris Rickett) brag about the new modern art exhibit at the Art Institute, while Seven (Jerry Mackinnon) vehemently argues that graffiti is just as valid. After his argument is rejected by Rhonda and Marco, we follow Seven and his crew—made up of JC (J. Salome Martinez Jr), Dose (Jessie D. Prez) and his girlfriend Selena (Kelly O’Sullivan)—as they make plans to do what no other artist in Chicago has ever done: create art outside of this esteemed museum’s walls.

Lisa Portes’ direction is the perfect combination of gritty and eloquent. As Seven, Mackinnon’s performance is so genuine you can hardly tell where the writing ends and the acting begins. Martinez’s delivery is straight from the heart and Prez’s humor is downright infectious. Brian Sidney Bembridge must also be commended for his scenic design, especially the exact replica of the museum wall.

Although the story veers into melodrama with Seven and Selena’s love story, Kevin Coval and Idris Goodwin have written a raw, visceral narrative that gives graffiti artists the humanity and genius the headlines rob them of. (Loy Webb)