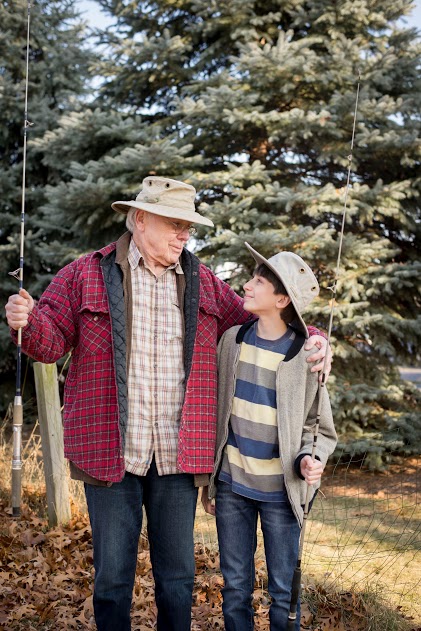 The legacy of the 1981 film version of “On Golden Pond, ” with iconic, Oscar-winning performances by Henry Fonda and Katharine Hepburn, weighs heavily on the heads of the actors who take on the roles of Norman and Ethel Thayer, and the theater mounting the production. With Henry’s daughter Jane playing the Thayer’s daughter Chelsea, the two were afforded the unique opportunity to play out characters and situations that mirrored their famously troubled relationship. Jane, who purchased the rights to Ernest Thompson’s play, accepted the Oscar on her bedridden father’s behalf; within months, Henry was dead.

Theatre at the Center opens its twenty-fifth anniversary season with “On Golden Pond.” Dennis Kelly and Ami Silvestre, married in real life, essay the roles of Norman and Ethel. Young Luke Michael Klein’s Billy muffles his strong heart with bravado, yet is easily disarmed by unconditional acceptance; the best scenes in the show are those played by Klein and Kelly.  As Bill, Dan Rodden reveals just the right amount of backbone, wrapped in kindness and humanity. Norm Boucher takes a cheerful stab at the mailman Charlie, but his accent is a fair-weather friend.

Thompson’s play won the Tony, his screenplay, the Oscar. It would be very unusual for a playwright not to be surrounded by script-doctors as he birthed a star-powered film. His 1979 play would be considered slight by contemporary standards. The dramatic arc offers a small bump and a quickly-leveled hill, and the characters suffer from lack of growth, or even of purpose. What is left us is mostly lighthearted jesting shared between people who love each other. And if the gossamer-threads are tied just right, we will love them, too. As is always the case with adaptations, audiences attending this play should not expect to see the movie. When I attended Theatre at the Center’s production, botched and forgotten lines killed the pacing, therefore the humor, and destroyed any potential pathos. (Aaron Hunt)