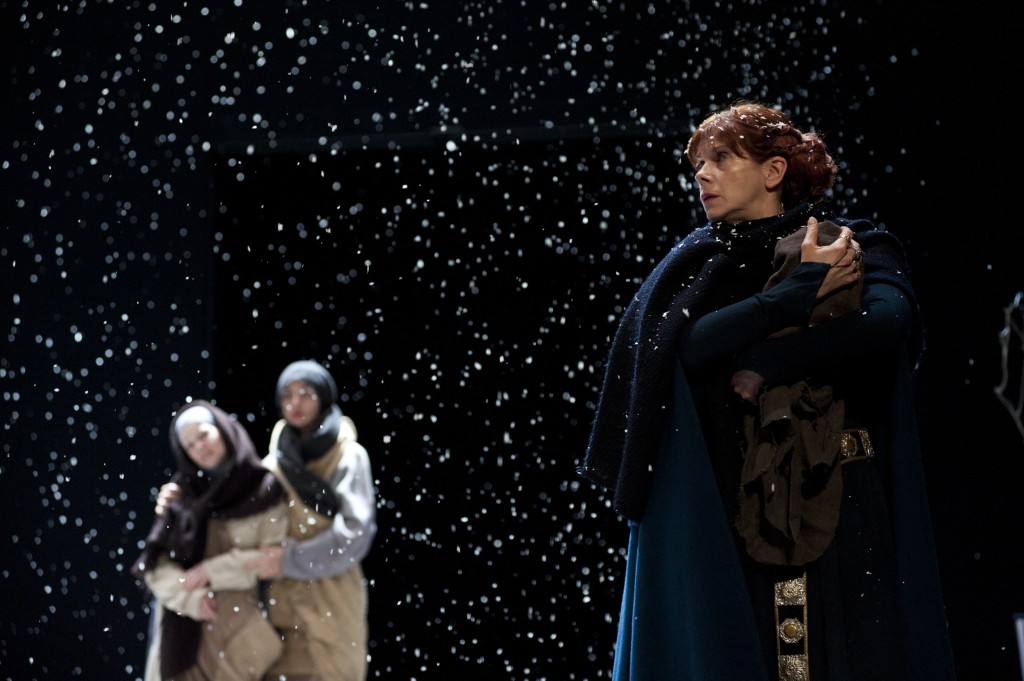 David Greig’s “Dunsinane” is a play playing three different games at once. The first game is that the play is a kinda-sorta sequel to Shakespeare’s “Macbeth.” The second game is that it is kinda-sorta a parable for the US and UK’s nation-building misadventures in Iraq and Afghanistan. The third game is that “Dunsinane” is most definitely a look inward at the Scottish national character. A ballad for a conquered nation, it trains a sharp critical eye at the motivations of the conquerors and an even sharper one at its own—oftentimes bloody—refusal to be conquered. I can imagine many a production of this play that would not be able to win all three games at once. But the National Theatre of Scotland, in partnership with the Royal Shakespeare Company, delivers one that sweeps the board; and thanks to Chicago Shakespeare Theater’s World’s Stage program it’s doing so at Navy Pier this month.

Just like with the war in Iraq, the forces of the English commander Siward (Darrell D’Silva) have been led into Scotland under false pretenses, only here the “faulty intelligence” are the same events depicted in Shakespeare’s play. Macbeth, who goes unnamed here, was maybe not a tyrant; and his wife, Gruach (Siobhan Redmond) is very not dead, and she also has a son. Oops. This potential challenge to the reign of the Joffrey Baratheon-esque Malcolm (Ewan Donald) creates a distinctly Scottish, boggy quagmire for Siward. Meanwhile, letters from a young soldier (Tom Gill) home to his mother track the slow disintegration of the English occupation. And it’s not hard to see why. Redmond’s alluring, unflinching Gruach is a worthy match for Shakespeare’s Lady M. Against the gruff naivete of D’Silva’s Siward, it’s not even close.

Director Roxana Silbert conjures a world for “Dunsinane” that is stone and mud and peat and crag and driven inexorably toward tragedy. A swelling Gaelic post-rock score, played live, and a late, enveloping snowfall effect are all wonderful theatrical touches so common for the National Theatre of Scotland but so rare everywhere else. This may be a history play, but is a history still living, still dangerous, and still not close to being done. (Alex Huntsberger)