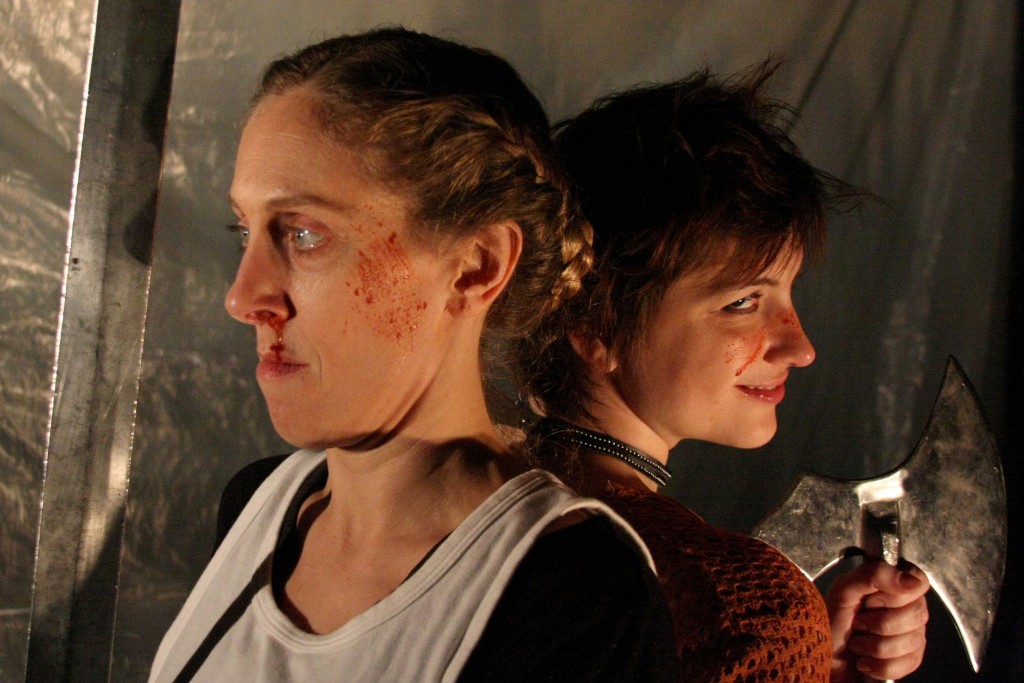 Sitting in the audience waiting for Babes with Blades’ all-female production of “Titus Andronicus” to begin, I did what any audience member does and took in the set, designed here by Carolyn Voss. I thought to myself “Hmm, grey stone columns, red Nazi-ish banners, long sheets of plastic painted to look like marble… they’re going with a ‘fascism’ interpretation. Okeedoke.”

However two-and-a-half hours later, as the final quarts of blood were being spilt, I took a look again and saw something else. I saw a serial killer’s basement. (The long sheets of plastic give off a very “Christian Bale explaining to Jared Leto the utter sublimity of Huey Lewis and the News” vibe.) And you know what? For a play that has the murderous glee of a “Call of Duty” game with the body count to match, that’s about right.

Directed by Michigan Shakespeare Festival artistic director Janice L. Blixt, this production is equal parts campy, sadistic, heartfelt and, most of all, fun. A few actresses play multiple roles, which in “Titus Andronicus” also means dying multiple deaths. By the middle of the second act, when their throats are slit and you see them staring forlornly out past the audience, you can almost detect a look of “Oh, not this again.” Libby Beyreis is the violence designer.

Amy E. Harmon stars as the titular Roman general. She brings a fine, bug-eyed severity to the role, making Titus’ descent from zealotry to madness merely a matter of degrees. Kimberly Logan meanwhile gives Harmon a worthy foil as the Goth Queen Tamora and Janice Kulka offers both sweetness and a sly intelligence as Titus’ beloved but (very) ill-fated daughter Lavinia.

But the standout performance belongs to Diana Coates as Aaron. Whenever she is onstage she holds your attention. Coates’ confidence and wit and restrained bemusement at the chaos all around her draw a portrait of Aaron that makes him seem, somewhat surprisingly, like the most well-adjusted character in the play. Granted, she’s evil as hell. But in a world as twisted as this one, she’s right in her element. (Alex Huntsberger)