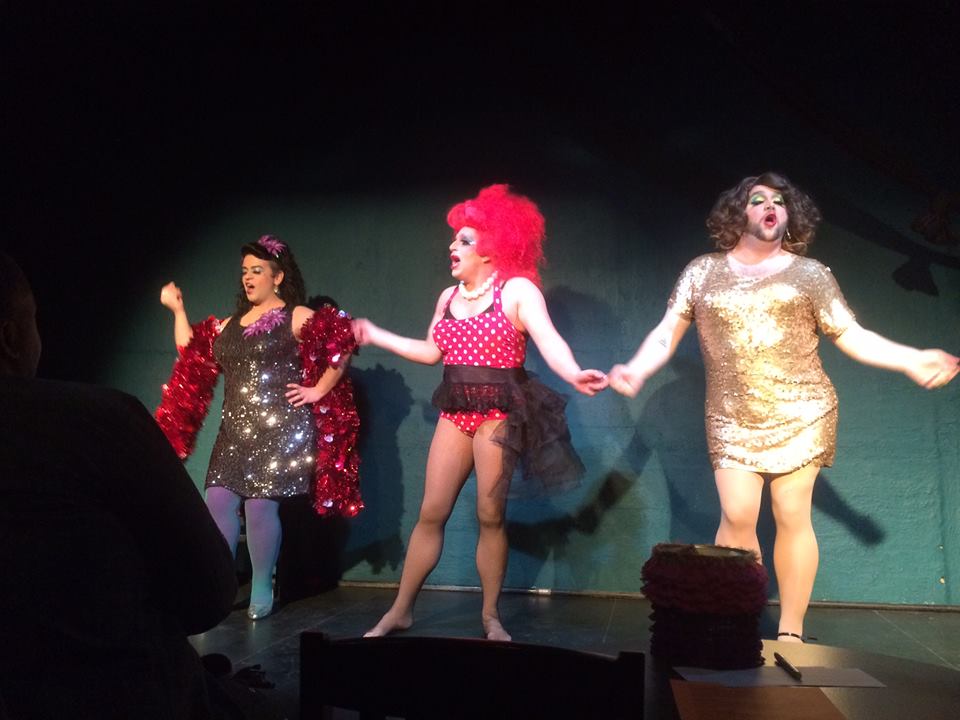 Chicago’s Uptown neighborhood celebrates the long-delayed opening of a venue for burlesque, cabaret, music, magic and comedy. Located in a bunny warren under the refurbished Walter W. Ahlschlager-designed Uptown Broadway Building, the Uptown Underground’s bar and multiple entertainment spaces have the feel of the thrilling, temporary safety of an Al Capone-era speakeasy.

Muffy Fishbasket and Vallery Dolls have been booked into the Underground’s Starlight Lounge, where they currently expound upon the peaks and valleys of “the world’s oldest profession.” With all the gender-bending panache of a couple of girls who have no intention of passing as females with “real lady bits,” Muffy and Vallery use the elements of clown and burlesque to successfully parody their parody. Muffy sports a Lucille Ball volcano wig that threatens to defile the ceiling, a corset, dirigible-bazooms, and little else. Vallery’s boa must be a registered weapon.

These girls do have a secret weapon: a gift that isn’t usually displayed when drag queens deign to entertain: they can really sing. Muffy’s fetching squawk doesn’t fall down the gender steps into the male-room very often. And Vallery unashamedly vibrates her John Raitt-baritone; if there’s ever a cross-gender production of “Carousel,” this girl has the goods for Blanche Bigelow. Vallery’s take on “Chocolate Jesus” will have you ordering a black Russian, and Muffy’s styling of “Pour Me A Man” is a combo of Madeline Kahn confusion and Mae West camp. In the eleven o’clock number, Muffy slipped into a skein of material that was attached to the ceiling, and charmed with a comic aerial display. The secret of how she kept that wig on her upside-down head must be buried with Capone.

Joined by special guest Yuka Layme, whose beard is as lovely as her production-tenor voice, nothing is off limits. If a pie-in-the-face wouldn’t ruin all that mascara, it would be tossed. Fancy Bandit Brown pounds the piano into submission. If anything, I would suggest that these performers return to the rehearsal hall and add fifteen minutes of material to the show. (Aaron Hunt)