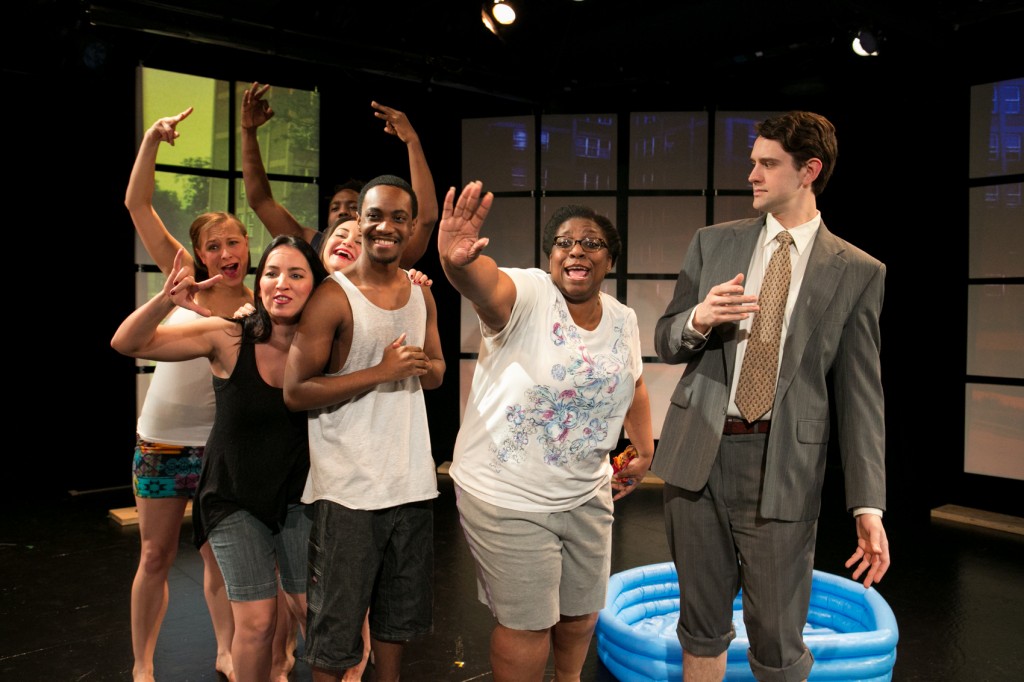 A mention of the skin-ripping heat plague that either directly caused or contributed to 739 deaths in Chicago in the summer of 1995 still causes those of us who lived through it to walk through a Windy City winter with jaw-grinding thankfulness. The PR department of the Mayor’s Office spun a tale of deceit that denounced the families, churches and neighbors of the victims for failing in their duty as emissaries of first response. It was left to the CDC and the National Weather Service to disprove this machination, although the residue of finger-pointing still lingers in the city’s consciousness. The mystery of a steady supply of power afforded affluent neighborhoods, while the homes of impoverished, minority citizens suffered repeated, long-term grid failure, continues unsolved.

Steven Simoncic’s play, adapted from Eric Klinenberg’s book, “Heat Wave: A Social Autopsy of Disaster in Chicago,” delivers the hard data of the tragedy, enlightening the horror by grounding his tale in humanity, and allowing the audience to breathe by the heavy use of humor. In lesser hands, such a play might force the watcher to disconnect for emotional safety; Simoncic holds our hands and walks us through the morgue.

Rebecca A. Barrett, responsible for the wonderful lighting design for all three Garage Rep productions, floods the story in a harsh, fluorescent glare, and Paul Deziel’s projections add a cold clarity. Director Rinska Carrasco-Prestinary’s fifteen-member cast, most of whom play multiple roles, provide rich, gut-grounded characterizations. Abby Pierce’s Hopper, an unintentional everyman if ever there was one, is the window into the piece. Mike Cherry’s Manny and Arch Harmon’s Lester contribute comedy and tragedy, cutting us in equal parts. The confrontation between Preston Tate Jr.’s Vanish and Eric Staves’ Ryan sears.

Simoncic’s play forces us to remember. And insists upon our watchfulness. (Aaron Hunt) 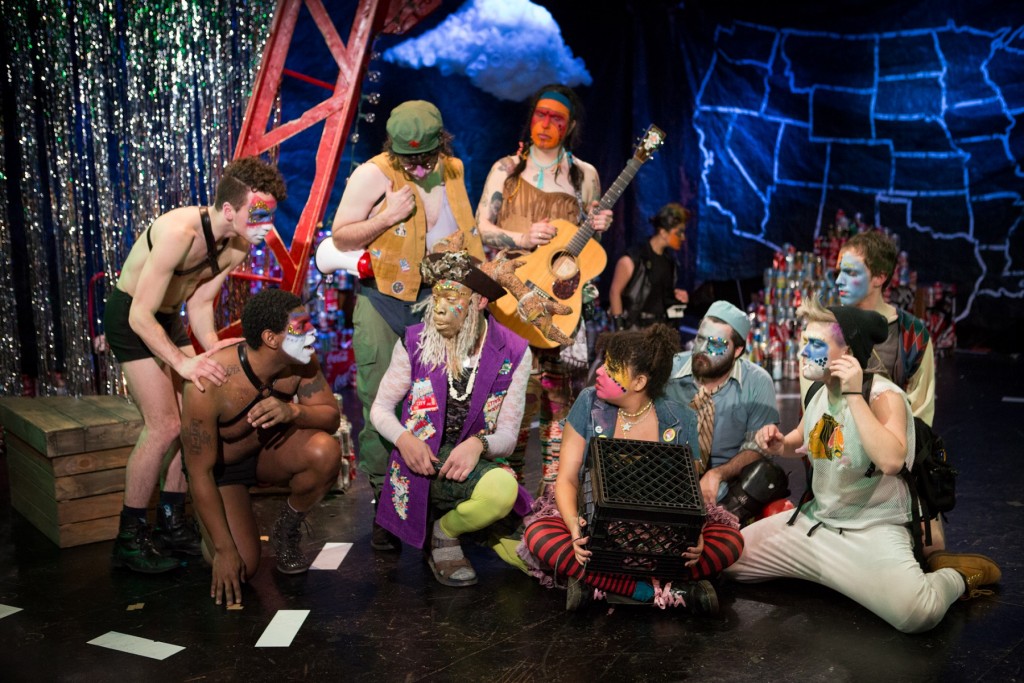 The Walk Across America for Mother Earth/Red Tape Theatre

I’m not quite certain that Red Tape’s offering of Taylor Mac’s musing can be considered a play. It is certainly an entertainment, rife with improvisation, rich in highly physical performances making heavy use of the clown esthetic and commedia dell’arte. As in each piece in this repertory, there is a political theme, and exploration of gay characters, or the gay community.

All the characters’ genders are fluid, and nearly every moment is highly sexualized; many sexual penchants are mimed with such precision as to cause the averting of eyes.

In fact, “The Walk” seems to be largely about the creation of a community, which one of the characters mentions as being a greater danger than a nation. Upon admittance, the audience is greeted and engaged by the players, sharing their political reasons for joining a protest march that will cross the country. During all the running and jumping and singing and cheering and sweating (none of these actors will need to see the inside of a gym during this run), there is never a fourth wall. During the intermission, the characters stage an un-talent show that includes the audience. The creation of a community that includes both the players and the audience is the piece of this puzzle that works.

Sadly, the rest of this doesn’t seem to have a central point. Walking and walking and walking, lots of sex, the occasional rumble, walking, some persuasive nudity, dialogue that neither enlightens nor surprises, and the occasional shouting of a sentence or phrase that might be considered to be profound in another environment, does not a play make. At best, this seems to be an allegory about activism. Maybe it is telling us that everyone who thinks they are doing something good for others are doing it because it makes them feel good about themselves.

I am hampered in my attempt to single out particular performances, as I was with this trio’s first offering, because there are no photographs or bios for the actors. (I consider this a grave injustice.) All of them are free and buoyant in their bodies, and make great sport of the Richard Simmons-esque calisthenics. As the self-announced leaders of the group, Sadie Rogers as King Arthur, and Angelica Roque as Rainbow Carl, spin gold out of Ben Nye and glitter.  (Aaron Hunt) 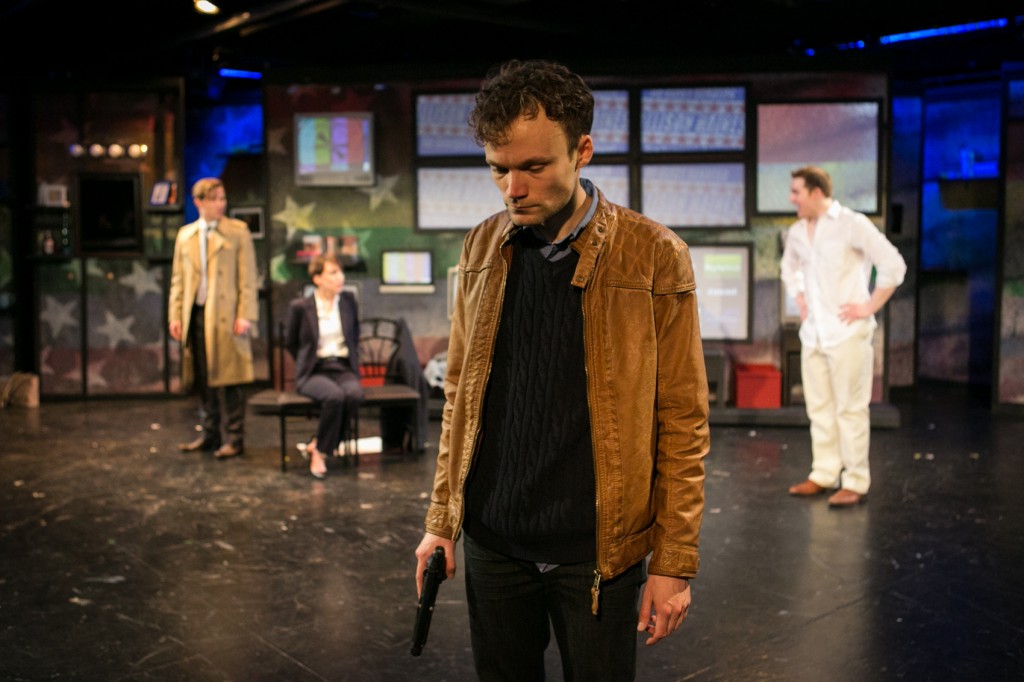 What would happen if the liberal victims of oppression took up the emotional and physical weaponry of their conservative oppressors? What would this leveling of the playing field look like? How would it feel?

Topher Payne’s play cloaks what an audience may find as unsavory behavior with disarming humor. This is brilliant stuff, which works on multiple levels, and will leave audiences ensnared by the riotous and disturbing characters and situations; this play will follow you home.

Director Derek Van Barham’s troupe doesn’t miss an opportunity to drop a one-liner on a dime, or to wring pathos out of a single bead of sweat. As the protagonists, Kevin Webb and James Nedrud charm and frighten. Webb gives us an ostensibly gentle character, equipped with great cunning and as capable of violence as, if we are to believe the pundit, are we all. Nedrud shoulders the challenge of a character with a core of steel wrapped in an unfocused and flighty persona; his shoulders are equal to the task. We see a great deal of Nedrud, and all of him is easy on the eyes.

As a potential boyfriend with a sociopathic determination to become the first gay president, Jude Hansen is as sweet as honey, his white molars never ceasing to sparkle, no matter the circumstance. Kelli Walker and Joan McGrath’s political opponents are finely drawn and beautifully executed, and Lisa Herceg’s performance is hysterically, heartbreakingly human. G. “Max” Maxin IV’s scenic and media design, Kallie Noelle Rolison’s sound design, and Alex Thompson’s videography do a marvelous job of helping PFP create the ethos of the shit-storm that can surround an election.

While displaying a clear gift for witty repartee and comedic situation, Payne also leaves us to ponder the nature, and potential necessity, of vigilantism. I was sobered, and I laughed my ass off, in equal parts. (Aaron Hunt)