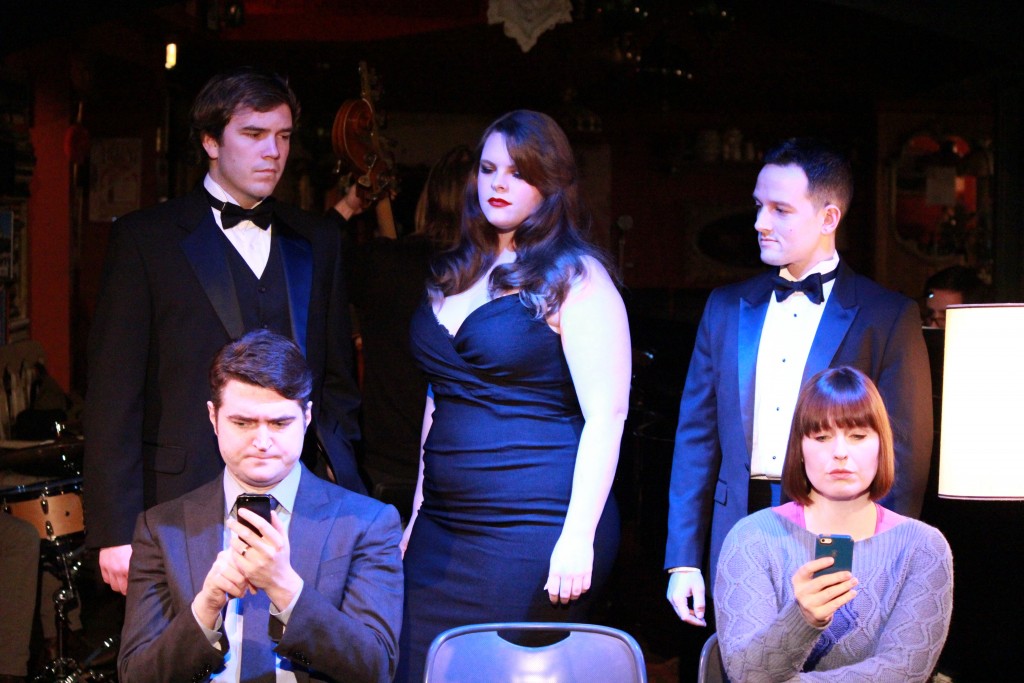 Pass through the ornate 1918 façade of the Chopin Theatre, bounce down a few generously carpeted stairs, and you’ll find yourself in the gregarious Pregnant Buffalo Lounge. Chicago Fringe Opera’s evening begins at the bar. For their program called “Voices in the Dark,” CFO immediately weaves a spell with low lighting and sultry jazz music, accompanied by a fine jazz trio, maestro Codrut Birsan at the piano.

When it’s time to swill down those drinks, the trio becomes an orchestra, and you’ll head into the Studio Theatre’s black box for their production of Leonard Bernstein’s “Trouble in Tahiti.”

Premiered in 1952, Bernstein’s darkest opera flexed his jazz muscles, while exercising his distinctive sense for a detached, melancholy vocal line. For the only time in his career, Bernstein wrote the libretto himself. A scathing judgment of disconnected Capitalism, the piece unjustly became the stuff of university mountings, with its small cast and technical simplicity.

There’s nothing academic or careful here. The Greek trio-chorus fill the roles of harassed secretaries, jilted psychoanalysts and masseuses. Soprano Jenny Schuler and tenors Jonathan Zeng and Tobias Wright easily navigate the complex rhythms of the jazzier sections of the score, creating singular personas while disappearing into each other at all the right moments.

The married couple they squire gives lie to the notion of a blissful greed-creed. Horribly unhappy in their “Little White House,” they sit in the same room and converse over their cell phones. Mezzo-soprano Julia Elise Hardin is a sympathetic Dinah, with a warm middle register that she uses to great effect in the “Quiet Place” aria. Kudos to Aaron Wardell for his macho-posturing, beautifully sung Sam. With every new role challenge, Wardell turns a corner. He now owns an instrument with a mellow lower extension, a persuasive middle, and the fiery high notes that keep an audience on the edge of their seats.