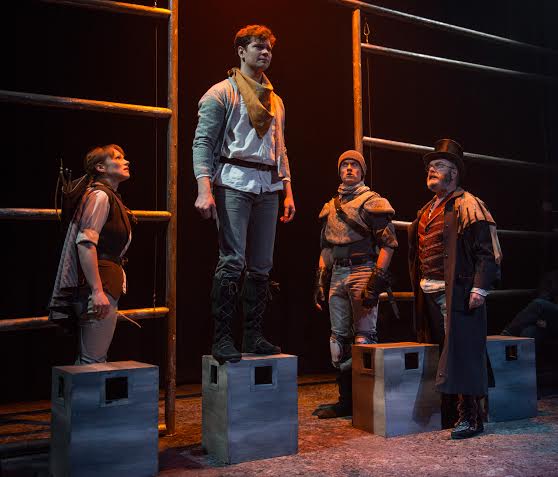 If “Game of Thrones” took the Arthurian high fantasy genre and dragged it off its clean white pedestal down into the muck, then The House Theatre’s “Hammer Trinity” is the thing that seizes it by the scruff of its neck and hauls it across the seas to American soil. The nine-hour, seven-act trilogy of plays is just as indebted to the legacy of America’s founding mythos—common folk bellowing for freedom, cracked bells, western outlaws, steel-hearted robber barons and endlessly rejustified genocides—as it is to the legends of Arthur and Merlin. It is also nothing short of stunning.

Written by Chris Mathews and Nathan Allen (who also directs), “The Hammer Trinity” tells of a land called New Plymouth—a place ruled by narratives. Instead of wizards there are storytellers, ancient beings who conjure tales about who is good and bad, right and wrong, who should rule and who should be ruled.

“The Iron Stag King,” the first play in the trilogy, opens with the tale of young Casper Kent (Kevin Stangler), a simple orphan who is (of course!) anything but. He learns from storyteller Hap The Golden (William Dick) that he must quest to find the magical Hammer of his ancestors and unite a splintered land. Hot on his heels are the forces of the Crownless, led by the vicious fop Henley Hawthorne (Joey Steakley) hellbent on snuffing out Casper’s royal line for good.

Casper is joined by a host of companions: the clever archer Rienne (Kara Davidson), the stern knight Wilke Forsbrand (Aaron Latterell), the gruff gunslinger Hollow Thom Gadsden (John Henry Roberts) and the kind but ill-equipped sidekick Pepper (Benjamin Hertel). All the while, a mysterious woman (Kay Kron) and her pack of foxes work on him from afar.

Rendered in the playful style, or perhaps “style of play,” that the House calls their own, ”The Iron Stag King” employs music, puppetry, combat, models and a keen sense of iconic imagery to work its magic. The story of who Casper will become might be up for grabs, but the story of “The Iron Stag King” is a most certain and satisfying one. (Alex Huntsberger) 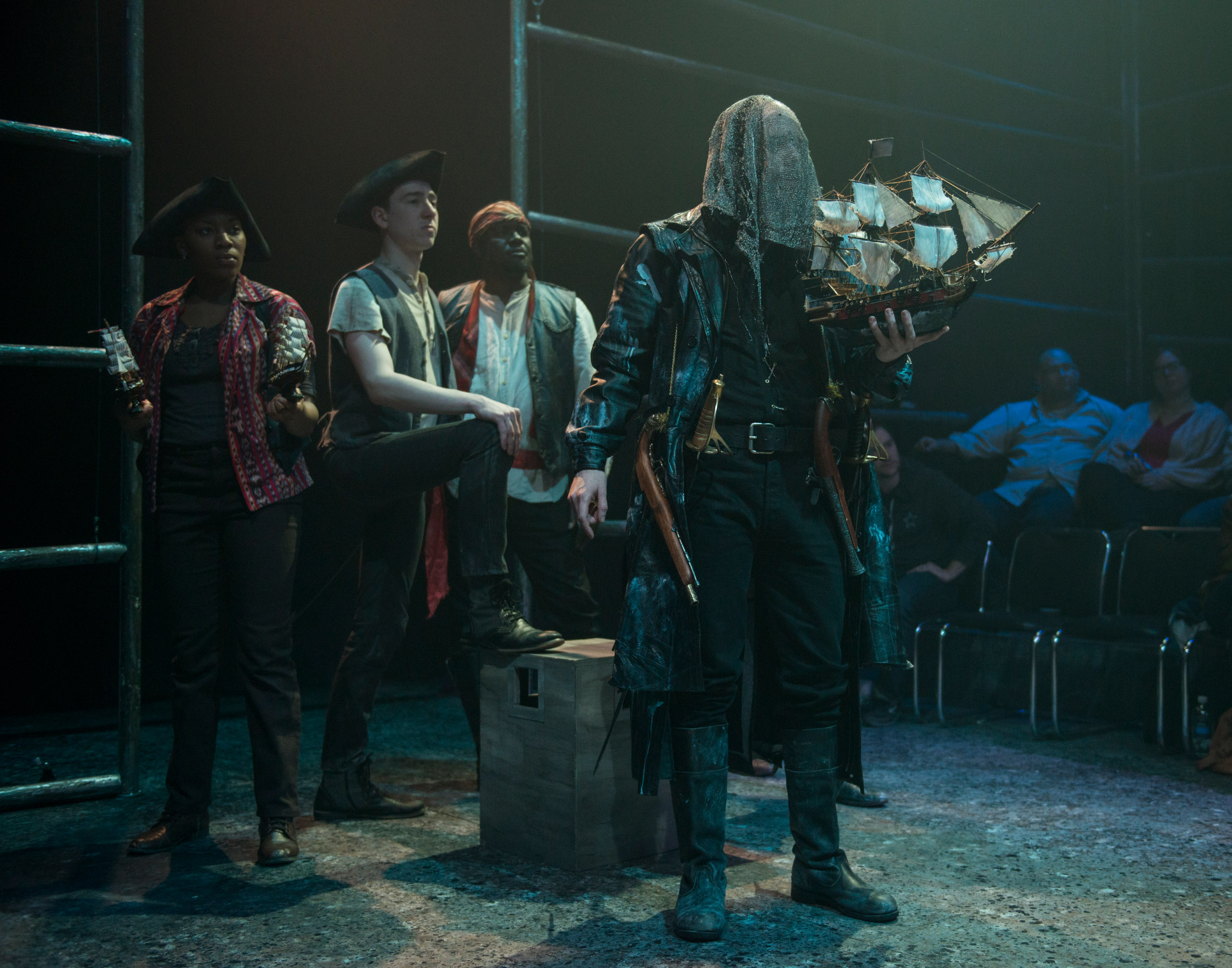 Though still engaging moment to moment, “The Crownless King” is the weakest of the three installments. As the middle chapter, it is tasked with widening the scope of New Plymouth beyond the tight focus of “Iron Stag King” while also expanding upon the ideas and themes the first play introduced. Where Part One introduces everything and Part Three resolves it, Part Two is left with all the dirty logistical work.

Happily, it still evokes more than enough laughs, gasps and cheers to justify the toil. Even though Casper Kent is now firmly installed in New Plymouth as the Iron Stag King and semi-happily, semi-awkwardly married off to his friend Rienne, there is rebellion from the Pirates of the Salt, led by masked marauder Davy Boone (Joe Bianco).

Making things worse, Casper’s friend Wilke is desperately in love with Rienne and Lady Olympia from the Grass (Isabel Liss) is demanding that the King hand over Hollow Thom in exchange for the navy’s support against Boone. Topping it off are the machinations of evil storyteller/totally-a-dragon Irek Obsidian (voiced by Tracy Mothereffing Letts) and his increasingly reluctant protégé, July of the Seven Foxes. Irek’s story of the Crownless King, not an Iron Stag one, poses a grave threat.

The play features numerous scenes of naval warfare, which Allen thrillingly stages with model ships wielded by the cast. Massive battles, that on the screen would require billions of pixels, are here rendered in literal miniature. Yet their impact on the audience is not diminished in the slightest.

“The Crownless King,” for all its twists and turns ends with a helluva cliffhanger to be continued in “The Excelsior King.” While it’s far from middling, it’s still very much the middle, and is best experienced in one of the all-day marathon performances. (Alex Huntsberger) 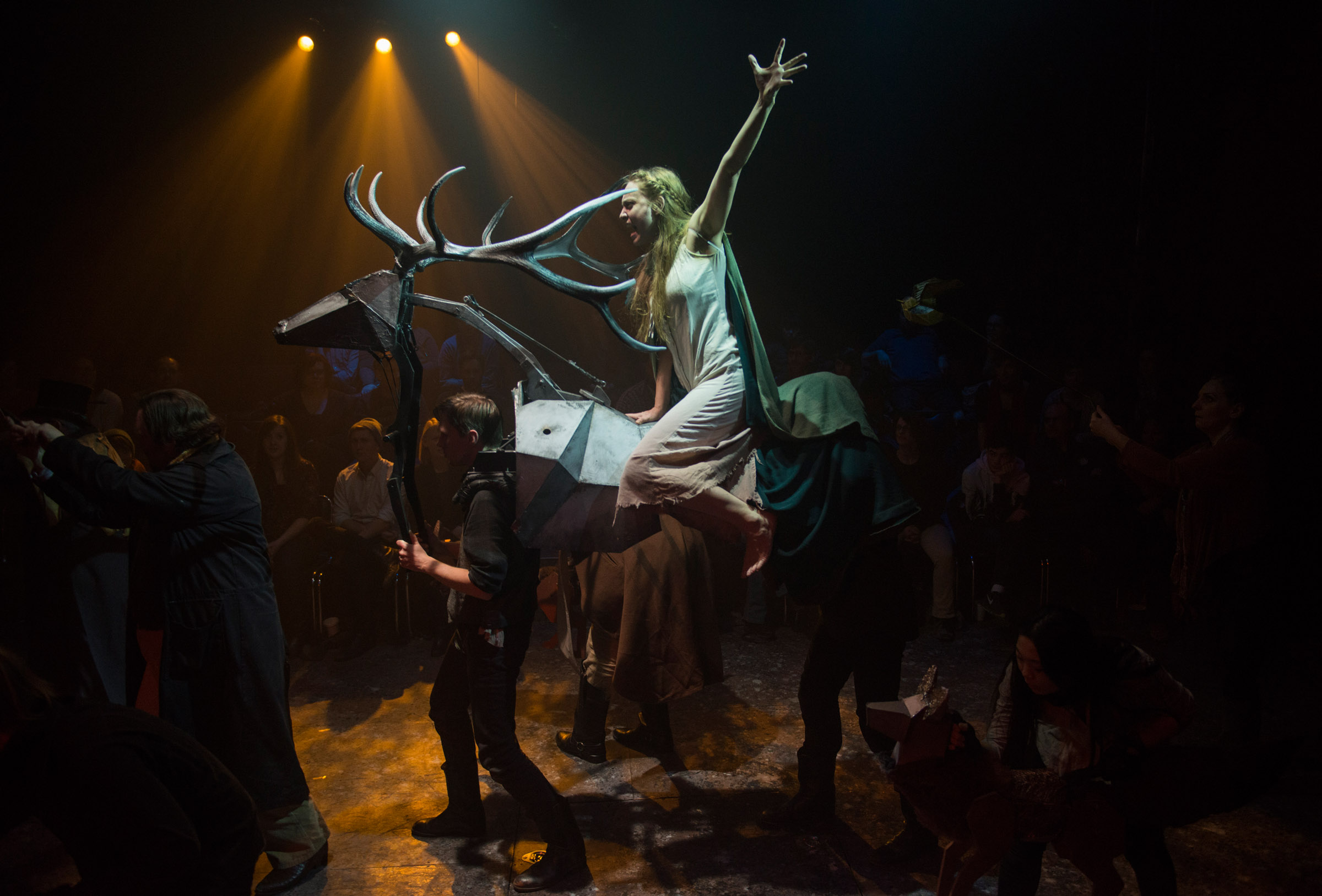 If you choose to attend one of “The Hammer Trinity”’s nine-hour marathons, then “The Excelsior King” will begin approximately six hours in. By that time, your energy and verve might very well be flagging. “I’ve liked this so far,” you might be saying to yourself, “but this last one really better be something.”

Well it is. It really is.

“The Excelsior King” opens with a war raging between Hap the Golden’s Iron Stag partisans and Irek Obsidian’s armies of the Crownless. July of Seven Foxes and her story of the Excelsior King is the only thing standing between New Plymouth and complete devastation.

Unfortunately for July, her king, Casper Kent, is currently under the sinister care of Kaelen Wayne (Christopher Hainsworth), the Ayn-Randian leader of a godless, subterranean steam-punk empire.

Hainsworth’s performance as Wayne might be the best one in the show. He presents a thoroughly practical, bluntly charming and utterly ruthless kind of evil that first seduces then repulses but never fails to entertain. His work is matched only by John Henry Roberts as Hollow Thom Gadsden. Roberts presents a dark, self-loathing, yet intensely honorable vision of heroism that is as badass as it is incredibly sexy.

(Aaron Latterell’s performance as Wilke Forsbrand also merits special praise. An understudy, Latterell filled in for JJ Phillips the night I attended, who had been injured during the previous day’s performance. He received a thundering ovation at night’s end and had earned every decibel.)

The show builds to a battle royale that is as thrilling as anything from “Return of the King.” It trades Peter Jackson’s budget for the House’s endless well of theatrical alchemy and is so much the better for it. It is a feat of theater and a triumphant victory for the trilogy’s knockout design team: Lee Keenan (lights), Joshua Horvath (sound), Melissa Torchia (costumes), Matt Hawkins (fight direction), Jesse Mooney-Bullock (puppet design), Eleanor Kahn (props) and Kevin O’Donnell (score).

Before every House show, the audience is encouraged to “make as much noise as humanly possible.” But “The Excelsior King” needs no such entreaty. It will make you laugh, scream, cry and cheer all on its own. (Alex Huntsberger)