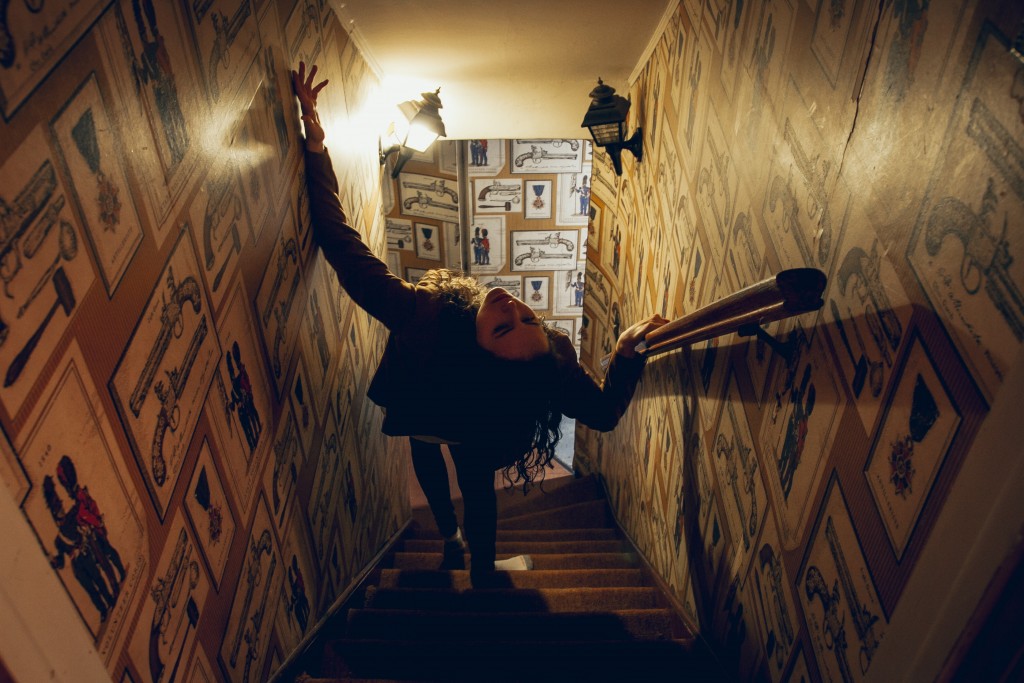 Last Wednesday night I found myself in a first-floor apartment on the far North Side of Chicago, standing in front of a sofa conversing with a young playwright talking about her education and her budding writing career while we waited for the performance of “Faust (Save Me or I’ll Die)”—a version of Goethe’s “Faust, Part I”—to begin.

The apartment seemed unpromising as a staging area for a reading, let alone a play with the swift-changing scenes and the multifarious action that characterize “Faust.” We were talking in the living room, no larger than 400 square feet. To the east a small dining room divided a sun room on the northeast side of the apartment from a small kitchen on the southeast corner. I doubt the one-bedroom apartment encompassed 1,000 square feet.

I had been greeted at the building door by the director of the play, Olivia Lilley, a smiling, gracious young woman who took our coats and introduced us to the woman who held the lease on this night’s venue, the young playwright I ended up talking to.

The actors who made up the troupe of the Runaways Lab Theater, formed two years ago by a group of young thespians, were scattered about the premises, laughing and talking. By design, each performance of the company happens in a different place somewhere in Chicago. Paying playgoers are informed by email or text message where that night’s performance will take place.

This atmosphere of informality, improvisation and the deliberate avoidance of anything that smacked of routine, regular institutions and elaborate theatrical machinery had charmed me mightily two months before at the Hypocrite’s performance of “The Pirates of Penzance,” and I was impatient for the proceedings to start.

I would never have attempted what Lilley and her young actors were so confident they were going to carry out. “Faust” is very difficult to perform. Goethe’s meter, rhymed couplets, and plain speaking confound the popular conception of what a Romantic dramatic poet should sound like. His diction avoids poetical conceits and extended metaphor; his verse eschews complicated meter and blank verse. It is the language of rough, everyday objects and strong emotions presented in doggerel. Falling into sing-song is a constant temptation for actors.

The length of the play makes cuts imperative. I estimate that an uncut performance of “Faust” would last a third longer than an uncut “Hamlet”—that is, six hours minimum.

But then, the director who must cut faces an impossible dilemma. If she doesn’t cut, her audience falls asleep because it’s two in the morning. If she does cut, she loses much of the evocative force of Goethe’s simple description of places and characters, and the action, already difficult to keep up with, becomes much harder to follow.

Lilley never satisfactorily resolved this dilemma. In fact, she added a new dilemma for me by asking her audience to “be the architect of your own space during the performance.” In practice, it proved onerous for this spoiled-rotten critic to follow the actors around the apartment, even for short distances, and too hard to hear their stage whispers in a place as close as the dining room, just fifteen or twenty feet from where I sat.

Your critic likes to sit on his duff and be entertained. On principle, I like my posterior flattened and the action right in front of me. It seemed artificial to follow a pair of actors to the dining room and stand straining to listen to sotto voce dialogue in the kitchen.

What a play! Its very simplicity gets in the way of appreciation. The barebones story marches double-time to the gallows. “Faust” seems, and is, harsh, even brutal in its relentless stark depiction of common life, common entertainments, and the pitiless public treatment of the fallen Gretchen. Its hero is destructive, self-absorbed to the point of cruelty, incapable of and unworthy of Gretchen’s passion-love. How can he be a tragic hero? Mephisto’s diabolical stagey sensuality provokes sick feelings. 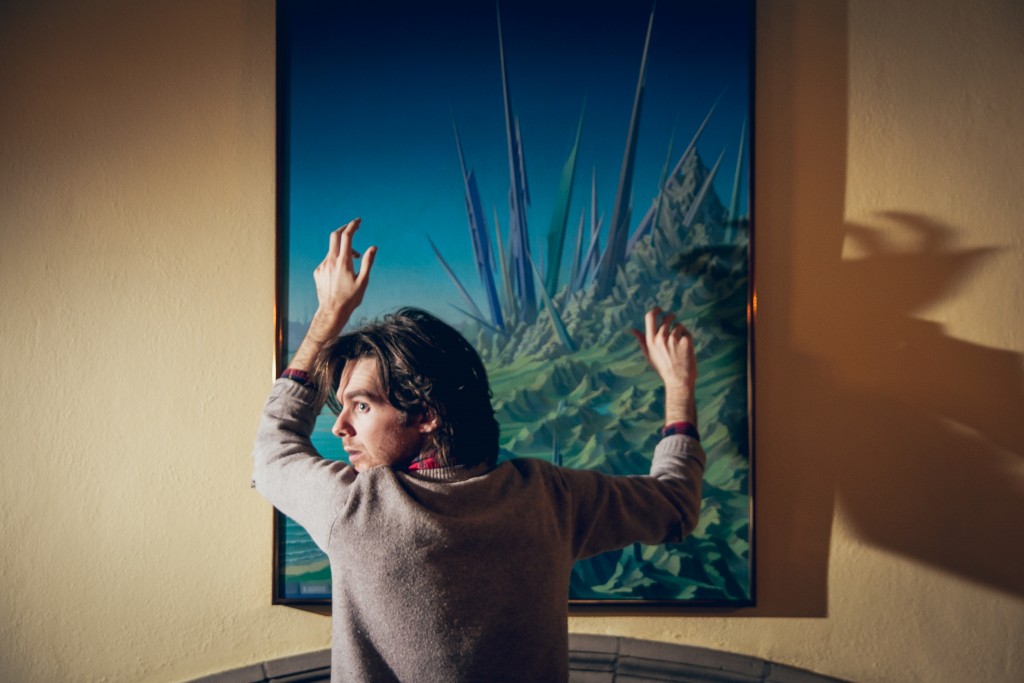 The wretchedness of Gretchen’s insanity and death in her jail cell easily surpasses in intensity and poignancy Ophelia’s mad scenes. Every detail tells; the horror etches itself on the reader’s brain before he realizes that this is “only a play.”

When I asked Lilley in an email after the performance where she had found the courage to surmount the “10,000 difficulties of the Faust monster,” she replied, “The only things worth doing are the impossible. How else are we to grow?”

This attitude grows rarer and rarer. It is, I submit, wholly admirable, and it augurs well for Lilley’s career if she continues in this path, although I admit she will never make herself a suburban theater favorite by following her inner classic-Romantic light.

Her actors put on a virtuoso show of memory. How they remembered their lines, performing in a barely familiar place—in a band-box crowded with playgoers—how they coordinated their ensemble in two dozen situations, impressed me more and more as the play wore on. Nothing bothered them, and their recitation was nearly letter-perfect.

It may seem small-minded on my part to point out that Faust, Mephisto and Marthe in Goethe’s play have all reached at least middle-age. Unfortunately this critic could not bring himself to magnanimously overlook the freshness, the vigor, the irrepressibility of the twentysomethings who played them on Wednesday. Gannon Reedy, who played Faust, put fire and passion into every line. But he couldn’t overcome his own bounding youthful energy, nor could he convincingly simulate the mid-life world-weariness of Faust, nor Faust’s extreme adult impatience with the callow “pleasures” Mephisto serves up.

I grew up with the bass-baritone Nicolai Ghiaurov singing Mephistopheles in Gounod’s “Faust,” and then later the divinely devilish, faultless baritone José van Dam singing the same role in Berlioz’ “Faust.”  When I hear Mephisto played, I count on the shivering disgust evoked by Mephisto’s faked sensuality to be reinforced by a booming, powerful, deep male voice.

The intelligent, articulate Erin Morrill, a woman who somehow has made a real acting career for herself in spite of her small, raspy, almost childish voice, played Mephisto in this production. I’m obliged to say that Meph’s calculating sensuality and his mirthless delight in cruelty were missing from her satanic portrait of him. If ever there were a part written expressly for a large, overbearing middle-aged man, this is it. Lindsey Tindall did her best as Marthe, but it, too, was a struggle made harder by her youth. She was at least twenty years too young for Marthe. Sarah Patin failed to suggest Gretchen’s bewilderment, her helpless attempts to understand what is happening to her when she succumbs to her passion for Faust. Gretchen should be played as if the actor is wrapped up in deep conversation with herself, abstracted from everyday life, mulling things over ceaselessly. Ben Kaye as Wagner: I wanted more of the earnest graduate student in his acting. Ben Kaye as Valentin, Gretchen’s soldier brother: I wanted a more military bearing, and more sullen slurred speech, more heavy-treading alcoholic behavior.

Every one of these young actors over-emoted. Often their speech was too vehement, too excited, and rushed. True, one and all knew their lines backwards and forwards. True, they performed miracles of blocking and movement in a tightly confined setting they had seen for the first time one week before the performance.

None of these concessions mean that my foregoing criticisms are mere quibbles. I thought the interpolated soliloquies by four of the main characters, five-minute oral meditations on each actor’s real-life experiences, were a miscalculation by Lilley. Why not instead write short speeches spoken by a herald, each fifteen-second speech identifying the actors, the locale and the dramatic situation in the next scene? I had read “Faust, Part I” at least twice before seeing this play, and I was hard put to identify scenes and characters on more than one occasion. I’m certain I wasn’t the only listener so baffled.

What amazes me about this performance is that it was done at all. Why am I floored? Because Faust is a classic, and, as everyone knows, the classics are dead. The suburbs revel in the thousandth local revival of “A Chorus Line” or yet another “Carousel.” Sophisticated urban taste sniffs at the Romantics. We old buffers suspect “Millennials” don’t care about anything but the next new iPhone. That massive public indifference to what is rare and great is why Lilley’s “Faust” is worth seeing, and why her re-creation counterbalances all that I criticize in it.

Curiosity about Lilley’s modus operandi and theatrical convictions led me to email her after the performance. What follows are my questions, her responses:

When did you become aware of Goethe and “Faust”?
I’ve been aware of the story of Faust for what seems like my entire life. From cartoon representations on ‘The Simpsons’ to parodies and adaptations over the years.

What made you tackle this summit of European poetry and drama?
When I met Gannon Reedy about two years ago, his energy and conviction onstage speaking Friedrich Schiller’s words in ‘The Robbers’ made me instantly recognize him as an exciting candidate for “Faust,” in all his neurosis, glory, faults, and earnestness. Also, the Runaways Lab Theater exists for the sole purpose of producing the most impossible projects.

What do you hope your representation conveys to its audiences?
I want to give my audiences an experience which makes the text immediate, alive, intimate, beautiful and imperfect. I want you to leave with lots of questions and things to argue about.

Why did you decide to incorporate personal soliloquies by some of the main actors in your production?
As you know, the text of “Faust” is much much much longer than my cut version. I had to get rid of a lot of the philosophical discussions for the sake of speed and action. To make up for that loss, the actors wrote confessionals from their own perspectives that centered on their lives and whatever themes they chose to incorporate from the story of “Faust.” I wanted each piece to feel true to the actor, so I let them have free rein. Although, I had a Confessional Poet give each of them feedback on their writing as well as educate them on the form.

Is there any aspect of your production you’d like to do over, and do “better”?
I don’t believe in “better,” I believe in “clearer.” In this case though, because so much of it is left up to personal discipline and chance, every show is completely different. The best performances of this show have moments of glory and moments of failure. I wouldn’t have it any other way.

“I wanted Goethe’s ‘Faust’ to be presented not as a dusty thing to be worshiped on a shelf, but as a contemporary accessible beautiful alive thing… that brings those words to LIFE.”

“Goethe believed in life and art as a journey not a destination. An art always ‘in process.’ Also he once said ‘the future of Western art is Confessional Work.’”

If culture and civilization, conversation and real sociability have a future in this country, their fates will depend on thinkers and doers like Olivia Lilley. That’s my conviction after spending a delightful (but flawed) evening watching and listening to “Faust (Save Me or I’ll Die).”  (Bill Sweetland)