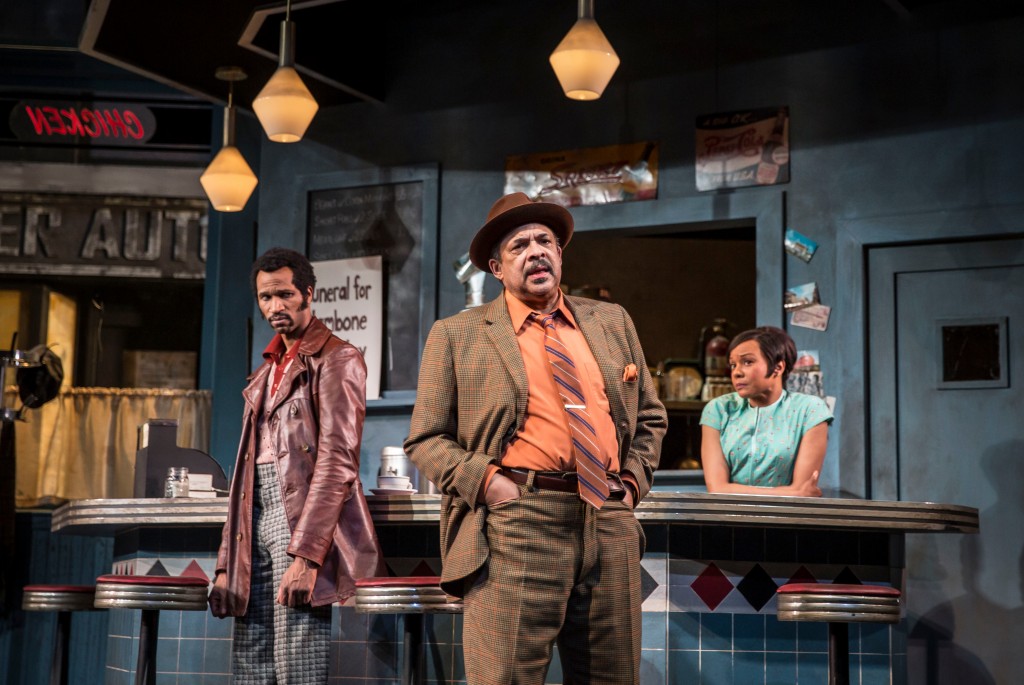 I think August Wilson’s play scripts might do more heavy lifting than those of any other American playwright. And what I mean by that is that if you stay true to them and treat them with care, then your production’s pretty much taken care of. He’s done most of the work already. (For comparison, Eugene O’Neill’s plays sometimes seem like they’re the Hunger Games: a brutal, taunting onslaught meant to cull the weak from the Brian Dennehy.)

I write this not to detract from the fine work done by director Chuck Smith and the wonderful cast of Wilson’s “Two Trains Running” which the Goodman Theatre is producing as the centerpiece of its “August Wilson Celebration.” They do fantastic work. But they do it with a kind of humble deference to the play itself. The direction and the performances and the design are simply a delivery system for Wilson’s lyrical, transcendent prose.

And that feels just right.

The play is set in 1969 in Pittsburgh’s Hill District (it’s the seventh play in Wilson’s ten-play “Pittsburgh Cycle”) within the walls of a diner owned by Memphis Lee (Terry Bellamy). Like most of Wilson’s other plays, it has several plots all slowly brought to a boil. There’s Memphis’ battle against early onset gentrification; fiery ex-con Sterling (Chester Gregory) and his exuberant, stutter-step courtship of waitress Risa, played with a curt elegance by Nambi E. Kelley; the numbers racket overseen by Wolf (Anthony Irons); and the recent death of Prophet Samuel, whose funeral is the play’s unseen backdrop.

Over two hours and forty-five minutes there are stories told, memories unearthed, new grudges made and old ones made new, an entire world skillfully painted with the grace and ease of a masterpiece doodled idly on the back of a grease-stained napkin.

But “Two Trains Running” isn’t Wilson’s masterpiece. It’s too easy-going and diffuse for that. Yet it is singular among his works for its optimism. Sure there is a lot of misery and pain and injustice, but there is also a palpable sense of hope, one that this production lets shine right through. (Alex Huntsberger)