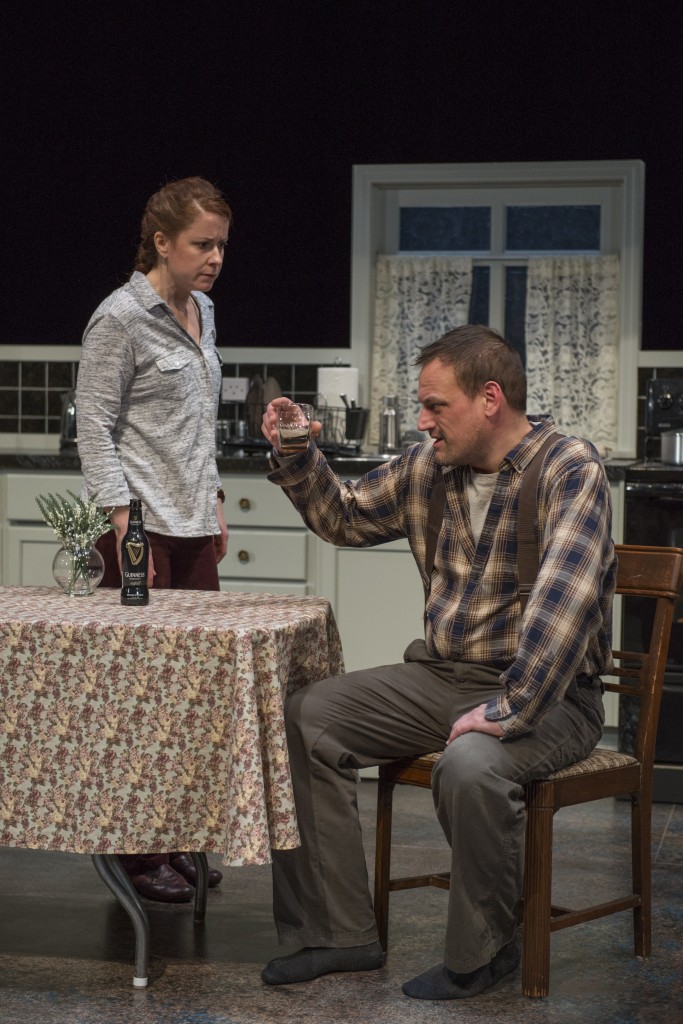 John Patrick Shanley’s newest play is the tale of Anthony Reilly, a man who believes himself to have no value to anyone else, a man who has dedicated his life to a farm that his father won’t leave to him after death, a man who takes every insignificant event as a sign from God, a man who isn’t right in the head. Mark L. Montgomery plays this man. It is a complex role that at times seems to flow so naturally through Montgomery that one might think he actually behaves like the wise dullard that he portrays in Northlight Theatre’s production of “Outside Mullingar,” directed by BJ Jones.

At its heart the play is a romantic comedy about Anthony Reilly finding his true love in the neighbor girl he has been ignoring for the past thirty years. Rosemary Muldoon (Kate Fry) is the last of the play’s four characters to hit the stage, but is the first to really bring vibrant energy to the play’s words. It is a good thing, then, that she is the eventual love interest of Montgomery’s character.

Fry captures the feisty stubbornness that is present in the script for all the characters, less Montgomery’s Reilly. Sadly, William J. Norris does not bring much to the production as Anthony’s father Tony Reilly. His character’s death does act as the catalyst for the second half of the play, however, allowing the younger generation to inhabit the stage alone. Once Rosemary and Anthony are left to themselves, the pacing takes off, and the show has the romantic tension to make it truly enjoyable. While the show is presented without an intermission, it is still clearly in two halves. The first of which serves primarily as exposition and background to the precious love story to come.

Its slow start aside, this is a lovely, heart-warming tale of love succeeding after years of neglect, of hope and patience, of a man who has mysterious things wrong with him, and the woman who loves him anyway. (Christopher Kidder-Mostrom)