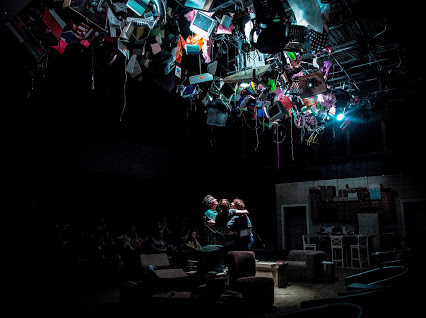 Deborah Zoe Laufer’s existential comedy “End Days” sounds like a tongue-in-cheek choice for the Windy City Playhouse’s launch of its inaugural season. If their opening performance in the department-store-sized black box is any indication of their determination to go the distance by providing a completely moveable seating plan of up to 149, an elegant bar, and music and visual art that complement and question the themes of the play, then here is a new kind of Chicago storefront—one that relaxes an audience as they are immersed in the totality of an experience. And before you tell me this isn’t storefront theater, you’ll have to cross the stage to get to the bathrooms. Enough said. Artistic director Amy Rubenstein’s program notes include this important caveat: “We aim not to compete with the excellent art that already exists, but rather to complement.”

Director Henry Godinez keeps the shouting lighthearted, and the pacing Noel Coward-esque. I have experienced this play as a deadly evening reminiscent of “Virginia Woolf” if Martha and George believed the rapture was just a martini away. This tale of four people living in the aftermath of 9/11 is a love story disguised in disconnection. The mother searches for safety for her family. The father, having escaped from the disaster, disconnects completely, his pajamas beginning to smell. The daughter is furious to be left adrift; no one knows what kind of cereal she likes, and there isn’t any milk anyway.
Until a sympathetic and wildly smart boy moves into the neighborhood, and if he has to dress like Elvis to feel safe enough to help, what of that? Jesus appears, but doesn’t seem to know the answers. Stephen Hawking rolls in as well, but is only useful for sarcastic quips.

Will this quartet find a way to build a family? Just as I believe that Windy City Playhouse has found a winning amalgamation of theatrical style and art, I think they have every chance in the world. (Aaron Hunt)