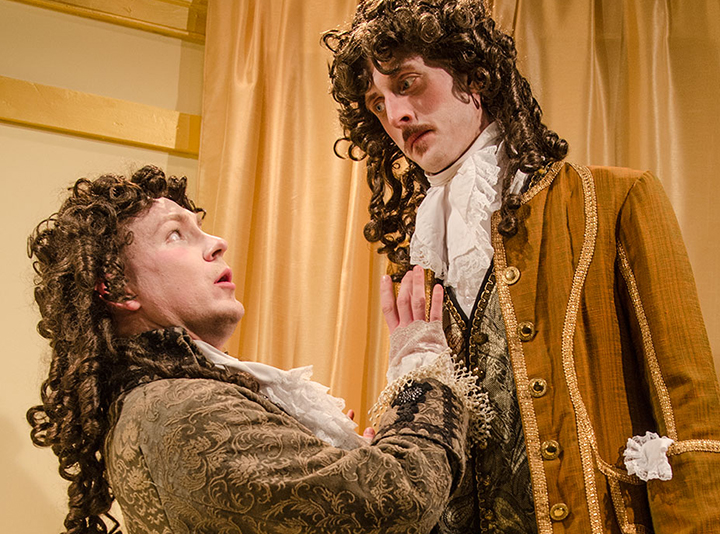 I truly wonder what would prompt a director to choose David Hirson’s “La Bête” as his or her next project to tackle. It is a play in the style of Moliere, with rhyming couplets throughout. That, in and of itself, is not too daunting of a challenge. After all, classical repertory companies do that sort of work all the time. What strikes me as something which would scare away most directors is the fact that very early in the script there is a monologue that goes on (and on, and on, and on) for well over thirty-five minutes. I’m guessing that you have to have a remarkably stellar actor in mind for the role of Valere before you even consider doing this show. Director Kay Martinovich clearly has such an actor in Kevin Cox. His portrayal of a playwright and absurdly foolish buffoon is amazing and leaves one walking away in awe of his skills.

Luckily, the actors around Cox are also well suited to the demands of their parts. Valere is a street performer who has found favor with the Princess, and therefore has infiltrated the ranks of the court’s favored theater company through accident and happenstance. It is easy to believe that these actors are the royal favorites, for from the first lines of the show Jesse Dornan as Elomire and Casey Chapman as Bejart show elite mastery of verse. Dornan is especially good at hitting internal and feminine rhymes in stride and allowing the dialogue to flow naturally while remaining heightened and stylized.

Much of this play belongs to these three men. But, when Ann Sonneville takes the stage as the Princess, she shines as brightly as the gentlemen. Meghan Lewis owns the stage whenever she appears as Dorine, a young member of the troupe who communicates only through gestures and words rhyming with “blue.”

Everything about this production of Hirson’s Olivier Award-winning play is high quality. It is a brilliant script treated brilliantly, which makes it one of the best currently running shows in town. (Christopher Kidder-Mostrom)