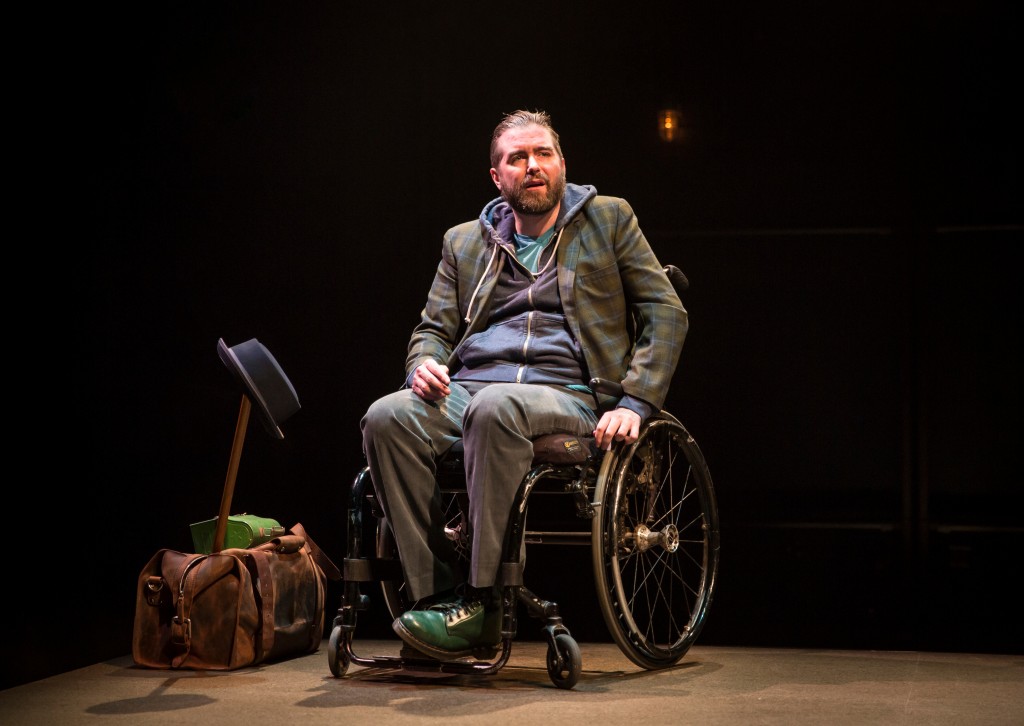 Michael Patrick Thornton as Traveler in Will Eno’s “Title and Deed”/Photo: Liz Lauren

The man in front of you is not from here. He’s a traveler from a foreign land. In fact “Traveler” is the only name by which he is identified. And as a person not from here he has a wonderful eye for the strangeness of everyday things. He’s an alien, who also happens to be human. He is completely removed but also entirely empathetic and understanding of our plight.

This man, gruffly and gorgeously embodied by actor Michael Patrick Thornton, is the lone and lonely character in Will Eno’s “Title and Deed,” currently receiving its Chicago premiere at Lookingglass Theatre. Directed with simplicity and grace by Marti Lyons, the production is a bit like a sonar blip, a quiet noise returning news from the endless dark inside us.

Good thing it’s funny too. Eno often gets compared to Samuel Beckett, and not without reason. Like Beckett, Eno is concerned with the eddies and peculiarities of human existence, but he is also as sharp a wit as they come. Theatregoers who enjoyed Halena Kays’ toy box production of “Endgame” with The Hypocrites earlier this season would do well to check out the far sparer “Title and Deed.”

The play is essentially plotless. One man enters, one man talks, one man eventually has the lights turned out on him almost mid-thought. Thornton’s Traveler begins by asking that we please not hate him, and proceeds to offer up observations, comparisons between his homeland and ours (fewer parades here, apparently) and some personal stories about various people he has met, and also the death of his mother. With a lesser actor or a lesser director, Eno’s delicate, knotty script could easily fall flat. But with Thornton and Lyons it is an absolute heartbreaking pleasure.

Thornton’s raspy, introverted monotone brings an earthiness to the part that charms while also hinting at past wounds that fester. Lyons, along with lighting (and set) designer Dan Ostling, crafts a series of subtle shifts that eventually reflect the Traveler’s growing sense of isolation: a slow fade to a sad spotlight.

Again, good thing it’s so funny. It’s too sad not to be. (Alex Huntsberger)