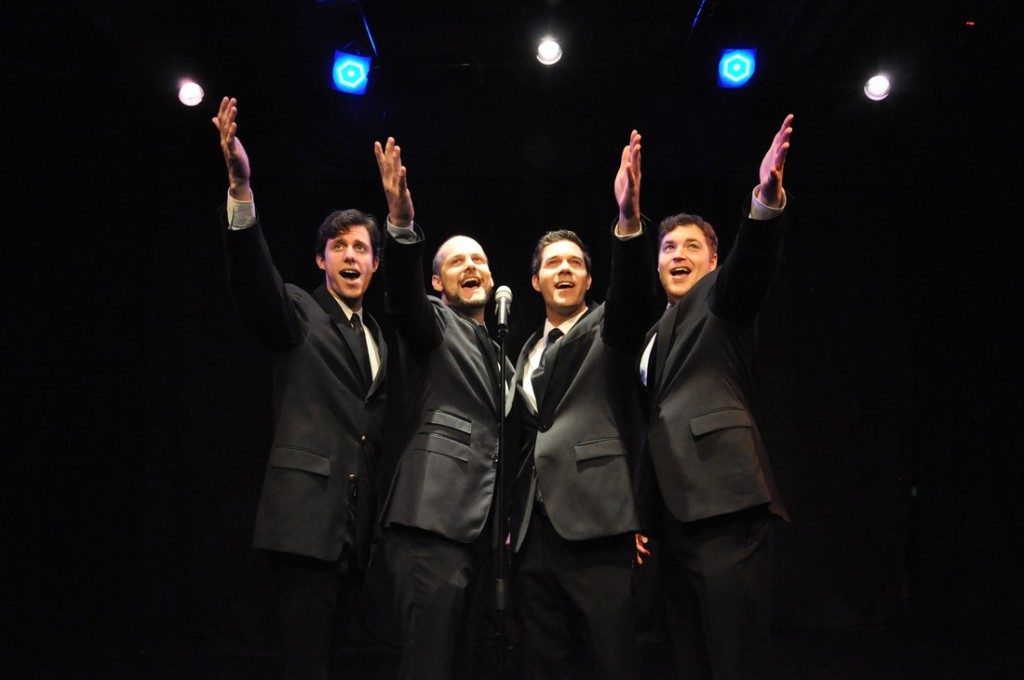 The bygone era of jukebox music still has something that keeps crowds reveling in nostalgia and “Chicago Dreams” at MCL has a skilled comedic cast that, with a little audience participation, pays tribute to those sixties melodies that are reminiscent of mop-tops, suited male quartets and spinning forty-fives.

The show, directed by Michael Shepherd Jordan and musically directed by Stephanie McCullough Vlcek, starts off in Connie’s Pizza on Chicago’s South Side. Three young servers who can carry a tune (the comedic Mark Rudy, the slick and recent jailbird Jean Bonavita and rotating bass singers Gary Fields and Jake Meyer) serenade Connie for her birthday. As they sing, a young patron (John Wesley Hughes) rounds out their harmonies and the servers set their sights on hitting the big time. However, the band’s newest and youngest member’s mom (the soulful vocalist Kristin Hopkins, who also plays a solo diva) is not happy about her son’s voice being used in any way other than to praise Jesus. The smooth-talking Michael Silver (aux characters) tries to convince her otherwise, which in turn leads to a moment where momma’s boy has to make a choice—ditch the band or become a man.

Though this type of story is very reminiscent of other era musicals—“Jersey Boys,” “That Thing You Do,” etc.—its improvised numbers combined with classic covers make it unpredictably funny, with chances for some of the most comedic moments to be led by audience suggestions. During Friday’s performance an audience member (full disclosure: me) had a chance to name the band. (I went with “Four Happy Boys” and I think it worked out pretty well.)

At times the live band’s sound can overpower that of the vocalists, who sing without microphones. However, most of the time, the audience can understand what’s being sung and it doesn’t impact the enjoyment of the performance. Also, if you come out feeling like the show wasn’t totally worth the admission price, or if you don’t want the night to end right after the show, the box office offers patrons a free post-performance beer at Trader Todd’s. You really can’t lose. (Mary Kroeck)