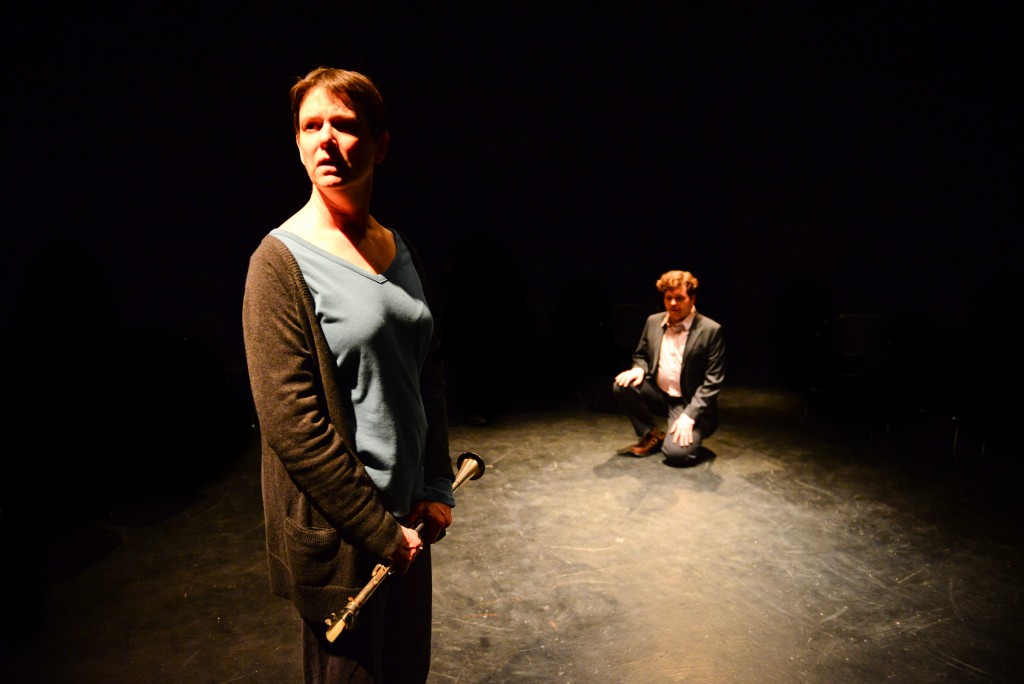 In this day and age, people are often defined publicly by what they put forth through electronic means of communication. Mickle Maher’s play “Song About Himself” is an exploration of what would happen if the means of communication could become one of the online personalities that inhabit the bits and bytes that make up online life.

Colm O’Reilly plays the character of an internet hosting service (akin to nineties standbys AOL or CompuServe) which has gained a level of sentience that is comparable to a confused child. The character is named Host/Hostess, and he/she is the guardian of a minute universe that resembles a chatroom from the days of the internet’s beginnings. Into this world comes Carol (Diana Slickman) who is in search of human companionship. Why she would choose an old outdated means of finding another human being is something that baffles throughout, but is revealed satisfactorily by the end of the show.

Carol interacts primarily with Host/Hostess, but longs for contact with Tod (Guy Massey), the only other human who occasionally stumbles into the chatroom. Carol’s and Tod’s paths do not often cross for more than mere seconds, but eventually they connect. Once they do, we are asked to question what is real and what is a figment of either our own imaginations, or of the world that is created in the digital realms online.

The spare staging, which depends heavily upon lighting to define the reality of these characters, creates a world that is at once devoid of any limits and yet seriously constrictive. There is a feeling of being trapped along with the characters within the world of the play. Martha Bayne’s lighting design is almost a character in and of itself, occasionally providing punchlines through artfully timed dimming or blackouts.

While the piece pulls from Walt Whitman’s poetry, no knowledge of the source material is necessary to glean deep, impactful meaning from the show. It is a rich psychological and metaphysical landscape through which to travel, even for those not well-versed in “Leaves of Grass.” (Christopher Kidder-Mostrom)