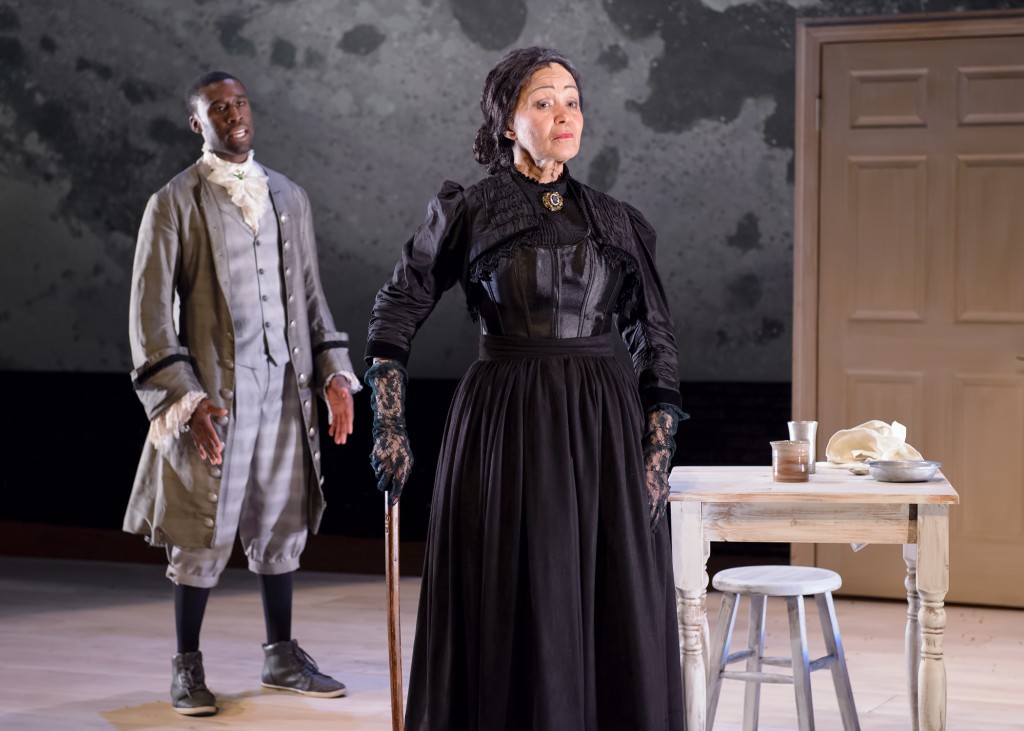 While Marcus Gardley’s “An Issue of Blood” is not a perfect play, it is indeed a powerful one. Set on a tobacco plantation in 1676 Virginia owned by Negro Mary (Lizan Mitchell), who owns two indentured servants—a married couple consisting of Nova Goode (E. Faye Butler), who possesses the spiritual gift of reading people’s lives, and Dozens Goode (Cleavant Derricks), who is poised to lead a people’s rebellion.

Negro Mary proudly boasts about being the first African-American woman to touch the land, but is also convinced that her land is cursed. Her greed for money and power has made it that way. It swallowed her husband and is now after her son John Israel (Tosin Morohunfola). She sent him away to protect him, yet he has returned to marry Calla (Eleni Pappageorge), an Irish indentured servant he has bought. However, Calla’s heart lies with Constable Mason Esau (Steve O’Connell), though the benefits of being with John outweigh her heart’s desire. In a culmination of twisted fate, the curse of the land might not be a myth after all.

With this play, Gardley attempts to provide an answer to why gruesome violence continues to plague America. And while Gardley in his writing has given it an intriguing, passionate and heartfelt explanation, the acting and directing don’t wholeheartedly support his vision.

Specifically lost in translation from page to stage is Gardley’s exploration of spirituality. That spirituality is rooted in African traditions, as seen through the characters of Nova and Negro Mary. That connection of how these African traditions were able to survive on American shores, even by those who adopted “European religion,” don’t seem to be fully grasped by the actors or in the directing. This is problematic given that this is the continuous thread throughout the play.

Additionally, because the play veers into melodrama, playing up too much of the humor, the powerful moments have a lessened impact. Still, for all of this production’s shortcomings, “An Issue of Blood” itself remains an important play worth seeing. (Loy Webb).