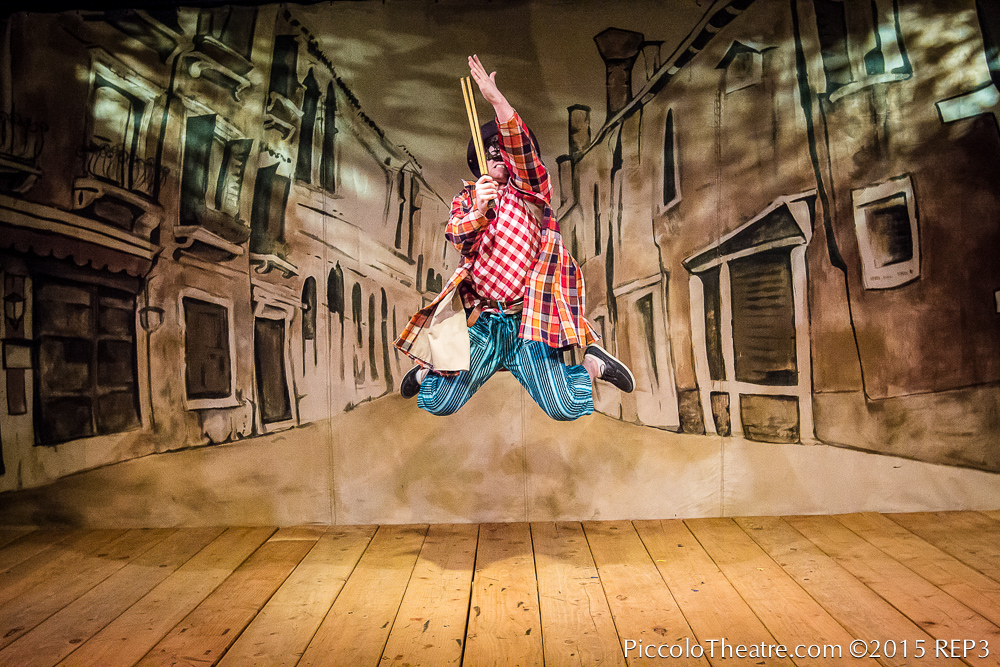 While Carlo Goldoni’s 1747 play hangs on the familiar device of mayhem following in the wake of mistaken identical twins and the supporting stock characters of its time, Evanston’s Piccolo Theatre grabs the trope by its rubber-chicken neck and reinvigorates it. The backbone of Piccolo’s aesthetic is the spirited, physical comedy stylings of Italian commedia dell’arte and its happy descendant, the wild and wily British Panto; this recipe for laughing-until-you-cry is on full display in their production of “The Venetian Twins.”

All of the actors are skillful clowns. They sing, pratfall, play instruments, engage the audience nose-to-nose, and the true hearts of their characters cannot be contained behind masks. Whenever possible, all of the eleven players are onstage, with those not central to the action seated at the sides of the playing space, strumming guitars, adding sounds to sight-gags, and functioning as Shakespearian groundlings, or operatic claquers, commenting on the action as if their opinion was tantamount. And indeed it is, as the cast “devises” the staging, and additional larking, as an ensemble.

Nathan Thompson’s Arlecchino is a fine study in the commedia archetype, a seemingly slow, shuffling servant who is in reality quick-witted and agile. Alyson Grauer’s cross-dressed Florindo is impeccable. Caitlin Aase and Claire Hart preen and spit ardently as the objects of affection. As is called for in the original script, Kurt Proepper plays both twins. Proepper is onstage for nearly the entire event, and his focused energy, within the relaxed ethos imperative for razor-sharp improvisation, epitomizes Piccolo’s work.

Piccolo’s “Venetian Twins” is greater than the sum of its parts; the traditional poses of masked commedia characters (women’s feet prettily pointed, gallant’s feet set apart at groin-endangering distances), alongside the burlesque-elements of Panto (principle boy essayed by a young woman, fearless parodying of the parody), all of this excellent buffoonery would have been sufficient. But Piccolo’s gentle contemporization of form, characterization and improvisational style creates the illusion of windblown street theater, given at a private party. (Aaron Hunt)