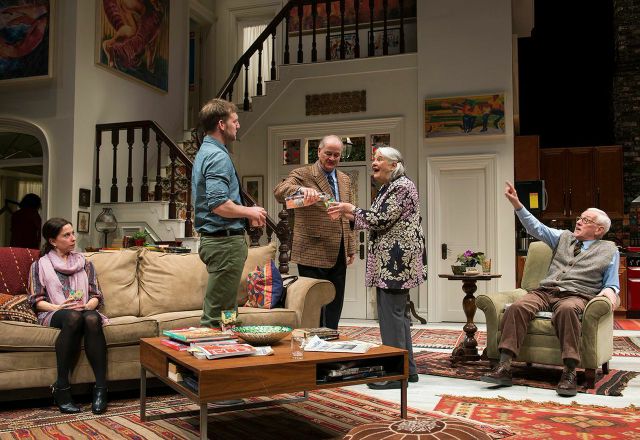 The family-sitting-room genre is built on secrecy. Sometimes it’s a literal secret, one that lurks from the opening curtain until just the right moment—usually right before an intermission—for it to be revealed. Other times, and this is the case with Rory Kinnear’s “The Herd,” it’s not an actual secret so much as it is a repression of truth. People feel a certain way, but they keep it to themselves. Only once the gears of plot have started to grind against their psyche do they finally unleash these private, pent-up thoughts. It makes for a handy catharsis, to have a son/daughter/husband/wife finally tell their mother/father/husband/wife what they really think.

Kinnear’s play, his first, is an efficient catharsis delivery device. It doesn’t surprise, but it doesn’t disappoint either. Kinnear is a major stage actor in the UK—his bio in the program is equal parts modest and mic drop—and he has written a play for actors. Despite the English setting, it’s a play perfectly suited to the Steppenwolf style. Director Frank Galati and the cast revel in the play’s climactic inter-family throw downs.

Molly Regan anchors the show as Carol, mother to a severely disabled son, Andy. It is the day of Andy’s twenty-first birthday, and he is on his way home, along with his caregiver, to celebrate. Joining Carol are her daughter Claire (Audrey Francis), her parents Brian (John Mahoney) and Patricia (Lois Smith) and Claire’s sort-of boyfriend Mark (Cliff Chamberlain). Everything is tumultuous, if normal, until Andy’s father, and Carol’s ex, Ian (Francis Guinan) arrives bearing with him a lifetime of regret. (Guinan, it must be said, is basically a theatrical cheat code. His innate likability renders even the prickliest, guiltiest characters sympathetic.)

The performances across the board are stellar—even if the British accents can be a bit dodgy at times. And the play concludes on a very fine moment for Mahoney—like father, like daughter apparently—although it fumbles about somewhat in getting there. “The Herd” may tread a path that’s trod down to the bedrock, but that rock forms a solid foundation. (Alex Huntsberger)