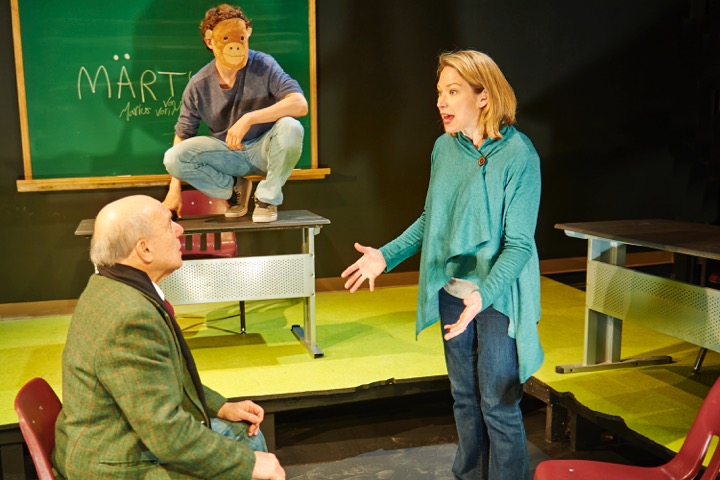 A high school student in Germany, alienated by the hypocrisy and materialism of his surroundings, turns to religious literalism. Soon, he becomes a gleaming-eyed fanatic at war with society and in search of martyrdom and its promised celestial rewards.

It sounds like the next act might involve a bit part in an ISIS decapitation video, but it’s Jesus that young Benjamin Sudel has found. Or at least a quasi-fascist variant that’s far more about smiting and damning than blessing and forgiving.

Unfortunately, the point of Marius von Mayenburg’s “Martyr” is lost in translation in this U.S. premiere. Perhaps in its original German, the play’s episodic, pseudo-Brechtian structure could carry an audience through Benjamin’s journey from disaffection to pathology to (telegraphed) violence. But director Joanie Schultz, who recently gave us a terrific “Yankee Tavern” at American Blues Theater, here disappoints. “Martyr” comes off as a dyspeptic and superficial freak show, in which the playwright’s smugness and contempt seems to parallel that of his insufferable anti-hero.

Brando Crawford, in the demanding, always-on-stage role of Benjamin, gives him just the right dash of vulnerability, reminding us that, as one of his teachers notes, “puberty is a form of temporary insanity.”

So is it just raging hormones that fuel Benjamin’s religious mania? We never find out, because Benjamin is a caricature, lacking depth and motivation and back story. Mayenburg treats religious fanaticism not as a symptom of marginalization or social malaise but as a contagious disease, requiring the vaccination of science and sex ed classes. By decontextualizing his tale, the playwright succeeds only in piling on to the intolerance that he bewails.

It’s a confused production of a confused play, with Cindy Marker as Benjamin’s self-absorbed mom giving stilted, underscored line readings. The other women in the cast—Kendra Thulin as Benjamin’s obsessive teacher and Claire Saxe as his skanky schoolmate—are better, but the roles themselves suggest an authorial misogyny of Talibanesque proportions.

“Martyr” is conflict without drama or development, in which nothing is clarified or resolved. What we’re left with is the depressing vision of a society that can bear neither faith nor its absence, one so fractured and empty and oppressive that at the end, every single character feels like a martyr and victim at the hands of everyone else. (Hugh Iglarsh)