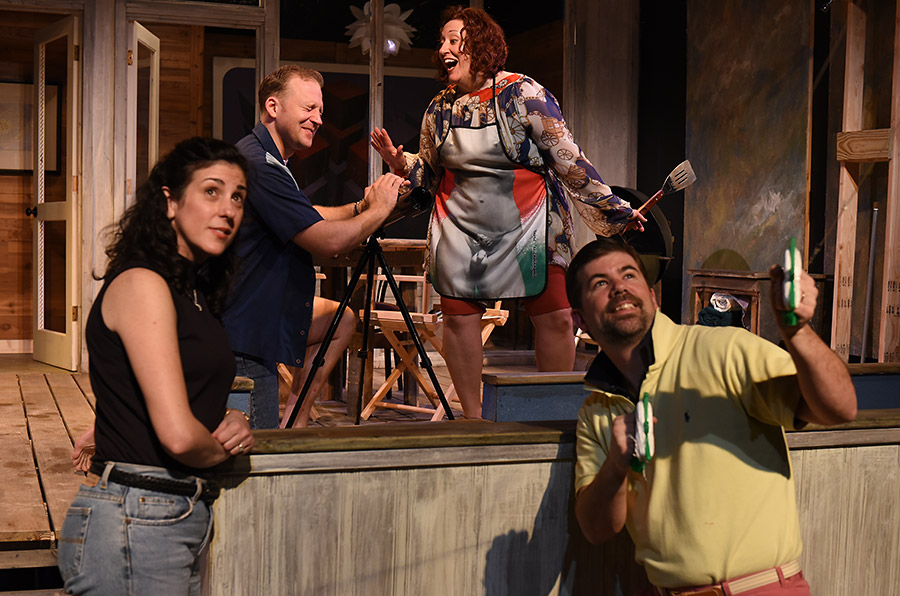 Since their 1997/98 season, Eclipse Theatre Company has focused on one particular playwright for all of their adventures, or revisited a group of previously examined authors for one of their two Celebration seasons. Eclipse often explores the playwright’s less familiar work, and they have done exactly that with their first production in a season devoted to fecund playwright Terrence McNally. “Lips Together, Teeth Apart” never opened on Broadway, but enjoyed a respectable run off-Broadway, with formidable actors Christine Baranski and Swoosie Kurtz in the cast. While McNally may seem to wax over-long (the evening comes in at three hours, with two intermissions) for his somewhat dated subject matter, it is difficult to discern what pieces of the puzzle could have been dispensed with, while leaving the myriad, interlocking themes intact.

Director Ted Hoerl’s acting foursome shoot July Fourth fireworks. As Sam and Sally Truman, Dennis Grimes and Kristin Collins create a portrait of a loving couple ravaged by staggering losses, both shared and singular, that they can’t voice to each other. John and Chloe Haddock (played by Nathaniel Swift and Carin Silkaitis, respectively) are the second couple cloaked in surprising silence; she is so busy jabbering and cooking and mothering and singing show tunes that it only appears she has never had an unexpressed thought, and although he seems to be the opposite-that-attracted, once his lust, anger and prejudice are given full sway, his sad, grasping song overshadows. All four actors fully inhabit these outwardly composed, inwardly human souls.

Kevin Hagan has created a fantastic set, replete with outdoor shower and swimming pool. Aaron Stephenson’s sound design is of the highest level, and extremely necessary to the narrative and the ambiance. The overall technical artistry on display makes the walls of the black box space disappear.

Eclipse’s mission to focus on an exploration of the career arc of such a playwright as McNally is a unique gift to Chicago’s intellectually discerning audiences. (Aaron Hunt)