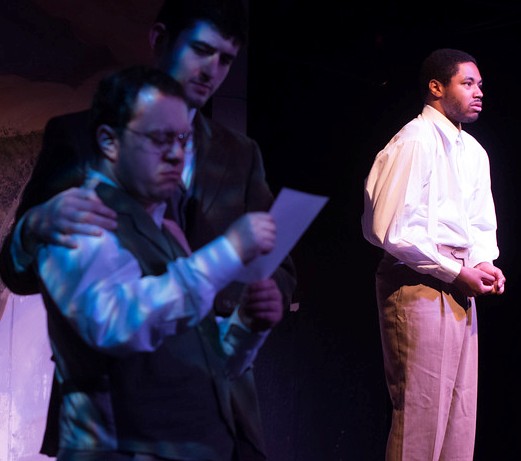 Playwright Kristine Thatcher has written an important play, and it has landed in the hands of exactly the right theater company for its world premiere. Commissioned and produced as the fifth and final installment of City Lit’s Civil War Sesquicentennial Project, “The Bloodhound Law” examines Illinois’ abolitionist stance leading up to that war. Beginning with the story of journalist Elijah Lovejoy, who dared to print anti-slavery editorials and was subsequently shot to death in Alton, and ending the journey with Chicago’s Common Council’s internal skirmishes over enforcement of the Fugitive Slave Act, or The Bloodhound Law, Thatcher’s historical dramatization of this tale of human rights denied gallops all the way from downstate to Chicago’s City Hall.

City Lit regularly produces adaptations of literary works, making this type of project particular to their province, and their team’s steady hand is very much in evidence. Director Terry McCabe wisely keeps his nine actors onstage throughout, giving them the freedom to rise from their seats, don a hat or a vest, and undertake another of the multiple characters assigned to all without the shuffling of entrances and exits. Liz Cooper’s lighting design keeps the focus of the narrative distinct, and dialect coach Catherine Gillespie succeeds with a yeoman’s assignment of forty-two characters.

It is no mean feat for an actor to inhabit multiple characters in a single theatrical vehicle. Whether an actor’s process involves building a character from the outside in, vice-versa, or in some combination, the goal must be to play honestly, yet with distinction. If the external process is out-of-balance, the result can be cartoonish; a strictly internal portrayal may cause confusion. The cast meets this challenge with varying levels of success. David Fink, Rob Glidden and Patrick Thornton’s several portraits answer well.

Thatcher’s new play should find a wide audience in high school theatricals. But as the residue of legalized bigotry is long lived, “The Bloodhound Law” is a history class we all should attend. (Aaron Hunt)