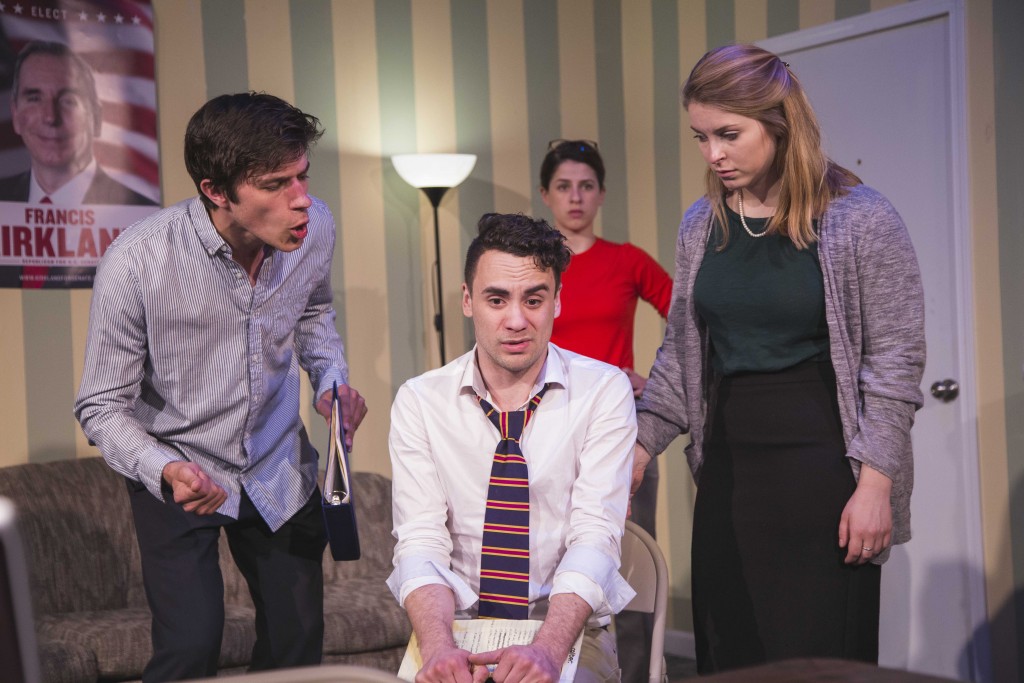 “The Paranoid Style in American Politics,” a new play by Emmett Rensin now premiering with First Floor Theater, takes its name from a famous 1964 essay by Richard Hofstadter. In the essay, Hofstadter surveys the Goldwater-era radical right and sees a raving bunch of loons convinced they are locked in an eternal struggle against the forces of darkness. It’s the sort of work that you could read and, minus a few period-specific references, be utterly convinced that it was written yesterday.

Rensin’s play doesn’t discover any further insights into the American Conservative mind, but it does employ the paranoia and ideological extremism therein to craft an enjoyable political whodunnit.

The story opens in the final week of the Illinois general election. Five staffers for the Republican nominee, stuffed into a well-used hotel-suite-cum-war-room, are watching in horror as a recording of their candidate’s private promise to a donor leaks to the press. As the staffers, including a hardline ex-reporter (Kate Cornelius-Schecter), a Yalie RINO (Mitch Salm) and the candidate’s own daughter (Amanda Fink) start accusing each other of being the source of the leak, the play skips back in time. We see the campaign from the very beginning, led by a hard-drinking, morals-eschewing Lee Atwater clone (Andrew Cutler), and motives, grudges, affairs and ambitions are laid before us to consider.

Directed by Will Bishop, the production aims for a breakneck pace, which it often achieves, mostly for the better. In a show filled with verbal jousts, both Cutler and Salm shine. Their numerous duels as the two men jockey for control of the campaign give the play its best moments of flashing steel. Rensin’s dialogue isn’t in the same arena as “Veep” creator Armando “The Greek God of Swearing” Iannucci, but it’s got rhythm and bite.

Ultimately, the play doesn’t quite earn the lofty invocation of its title. It is as much a story about the process of politics as the ideologies behind them. His play could switch out its conservative references for liberal ones—change “secret abortion” to “doesn’t recycle”—and emerge relatively unchanged. (Alex Huntsberger)

First Floor Theater at Collaboraction, 1579 North Milwaukee, firstfloortheater.com, $20. Through May 9.