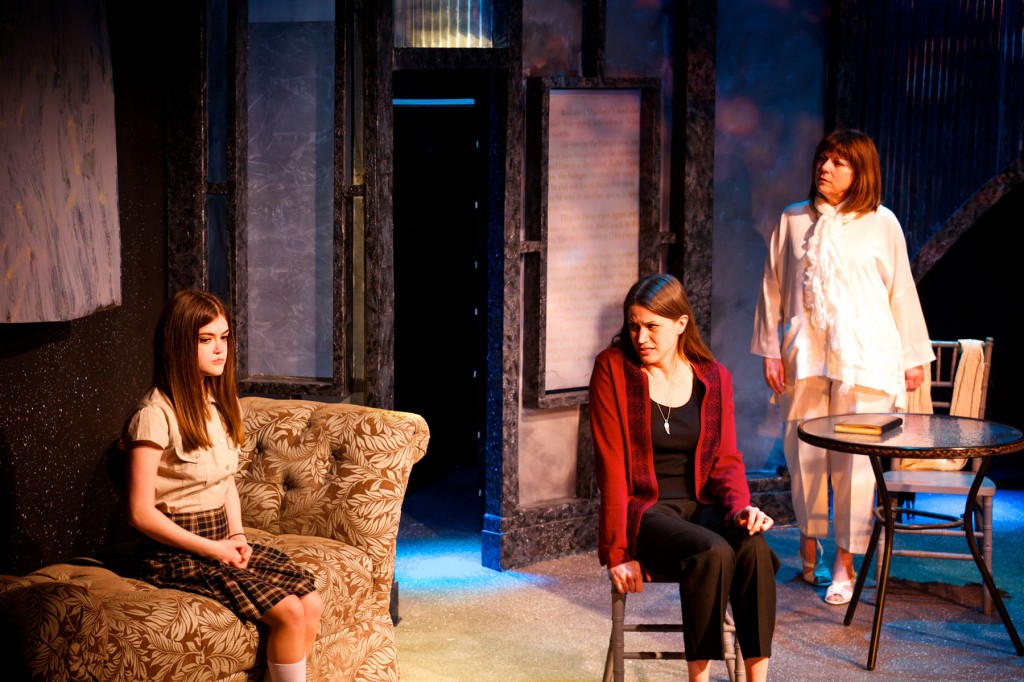 The publicity materials and preview articles written about Polarity Ensemble Theatre’s world-premiere production of “Anna in the Afterlife” admit that the play is a therapy exercise for the show’s creator. Playwright Richard Engling lost his dear friend to suicide, and then wrote a script that confronts his feelings about that death, his own mortality, and the search for the meaning of life.

Engling plays a character named Matthew (who can be taken as his surrogate within the realm of the story). Matthew is in a coma, but his spirit is in the afterlife, or at least the entrance lobby to the afterlife. There he meets a number of his deceased friends, and reviews and relives a series of scattered memories from his life. The first person he meets is his friend Anna (played in this instance by Ellyn Nugent). Anna has been split into three versions of herself in the afterlife: a small child (Sarah Eddy) who suffered from abuse; the woman that Matthew knew in life (Sheila Willis); and, finally, Nugent’s version, who has continued to age and change since death.

Sadly, casting the playwright as himself in this wholly self-serving work forces the audience to watch a man actively working through his emotional issues. An actual man, not a character. And that means that the character isn’t being acted. The other actors on stage do a great job of bringing their characters to life. Shawna Tucker is especially good in the role of Matthew’s ex-wife, and Shannon Nicole Hill is a delight as Matthew’s daughter. Engling’s real-life proximity to his character keeps him from effectively inhabiting the same world as the others on stage.

That world is an intriguing one. Ann Davis’ set design and Benjamin L. White’s lighting design work in concert to create an afterlife that is at once simple and dynamic. Frustratingly, the primary reason for visiting this world is something better done with a counselor than in a public forum. (Christopher Kidder-Mostrom)