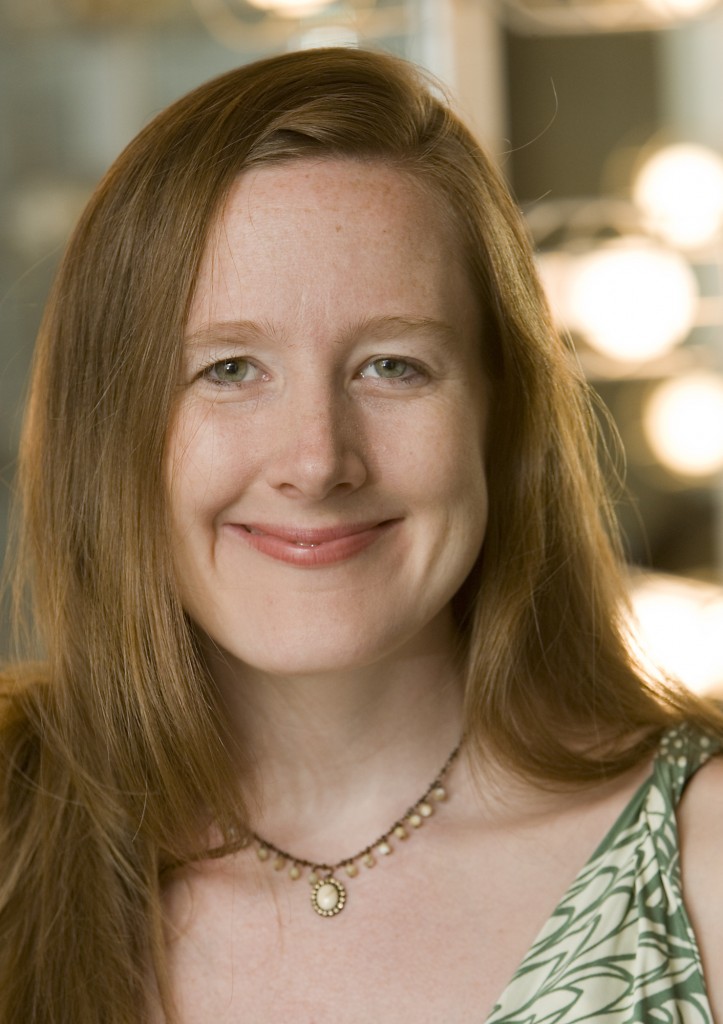 The area premiere of Sarah Ruhl’s “Melancholy Play: A Chamber Musical” at Evanston’s Piven Theatre Workshop is a big event in a small venue, and therein lies a tale.

The Wilmette-born Ruhl has been honored by everyone from the Pulitzer and Tony committees to the MacArthur Foundation, PEN and the NAACP. In plays like “In the Next Room, ” “The Clean House,” “Dead Man’s Cell Phone,” “Passion Play” and “Orlando,” Ruhl has established a reputation as an intellectually ambitious writer with a poet’s voice whose works are redolent of myth and fantasy, yet grounded in today’s social and psychic landscape.

She is, in short, a hot property, her works sought after by major theaters from Yale Rep to the Arena Stage in Washington, D.C. to our own Goodman. She also has a powerful, life-long connection to the Piven Theatre Workshop, having begun her dramatic training there in fourth grade. At Piven—described by its artistic director Jennifer Green as a “family affair”—Sarah Ruhl followed in the footsteps of her own mother, actress-teacher Kathleen Ruhl, as well as founders Joyce and Byrne Piven’s children, Shira and Jeremy, and such other notables as John and Joan Cusack. And then there’s fellow Young People’s Company alum Polly Noonan, who is directing the revised “Melancholy Play,” having twice starred as Tilly, the doleful bank teller, in the play’s original, pre-musical iteration at Piven.

It’s impossible to talk about “Melancholy Play” outside the Piven context. And it’s equally impossible to describe Piven without noting the intricate web of dynastic connections and artistic lineages at this paradoxical institution, whose ethos is noncommercial and anti-celebrity, yet which has produced a roster of stars and game-changers like Ruhl and her frequent collaborator, writer-director Jessica Thebus. Piven’s origins go back to the seminal theater games developed by Hull House instructor Viola Spolin in the 1930s. Equally influential is Spolin’s son Paul Sills, who along with David Shepherd and others merged his mother’s games with Brechtian dramaturgy to create both modern improv and narrator-driven story theater. The Piven Theatre Workshop is more than a school or stage; it is a living institutional memory of the Chicago theater tradition.

“I grew up thinking story theater was normal,” says Ruhl, interviewed by telephone at home while her three children—including five-year-old twins—were at school. “I was shocked at discovering realism later. I learned so much from Joyce Piven, that theater was not about sets or spectacle, but that language was everything, and that narration could be used as a transformative force, creating a very open relationship between audience and stage. I feel like I’m putting literature on stage, not just dialogue.”

Ruhl originally wanted to be a poet, but settled on theater after studying with playwright Paula Vogel at Brown. Vogel was immediately struck by her potential, observing that “if Virginia Woolf became a playwright, she’d be someone like Sarah Ruhl.”

“Playwrights are strange creatures,” comments Ruhl. “We’re both introverted and extroverted, and we need the solitude of writing and the collaboration of performance. For me, the happiest moment in the process is the first day I hear a script performed by actors.” 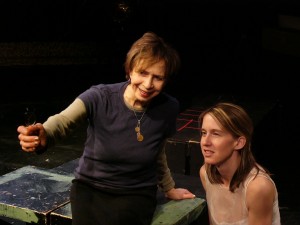 And not just any actors. Raised in the Spolin-Sills tradition of theater as community, Ruhl feels lucky to have her Piven posse behind her.

“What do you have without an ensemble?” she asks. “Well, you can put up a show—but it’s more rewarding with collaborators who know you. In New York, it’s more of a loose confederation of people. The model isn’t necessarily as communal as what I’m used to.”

“Melancholy Play: A Chamber Musical” premiered in 2012 in a bare-bones, no-critics-allowed run at the now-defunct 13P theater in Brooklyn, with music by New York composer Todd Almond. It’s based on a straight dramatic work that premiered a decade earlier.

“It’s a farce about melancholy,” notes Ruhl. “It’s also a speculation about what would happen if the category of melancholy—which had such a huge impact on lyric poetry and Renaissance literature—was eradicated. Of course, depression is a terrible disease. But do we really want a world where you can’t have nostalgia, you can’t have yearning?”

Set (inevitably) in Normal, Illinois, the play pits what Ruhl calls the “chipper pragmatism of the Midwest” against Tilly’s Hamlet-like gloom, illuminating in humorously surreal fashion the unhappy consequences of mandatory joy. The new version was born soon after the twins, when Ruhl wished to work with Almond on a musical but lacked the time to start from scratch.

“It was kamikaze-style musical making,” says Ruhl. “I’d never done it before, but it was a seamless collaboration with Todd, free of the usual blood, sweat and tears. He understood the comedy, and was able to score it rhythmically in a way that retained the humor.”

The new version of “Melancholy Play” is more of an opera than a conventional musical, with little distinction between libretto and lyrics. “The music is complex and challenging,” says director Noonan. “It’s fast and frenetic, with delicate moments of slowed-down melody.”

While Noonan describes the play as “beautiful, strange and funny, embracing its own silliness,” it has a serious side, questioning our culture’s discomfort with the darker emotions.

“The play exists on multiple levels,” says Noonan. “You can enjoy the ride, and that can be enough. But the play keeps unfolding, reminding us that as we medicate ourselves, we’re losing certain elements. The play muses upon what it means to be alive.”

The play’s theme of emotional fullness and authenticity intersects with Ruhl’s history at Piven, with its emphasis on nurturing self-expression within an artistic community. While every show lives or dies on its own merits, knowing the history and connections behind a theatrical event like “Melancholy Play” enriches the experience, rooting it in time and place, and so transforming it from a diversion into something deeper and more real.

“The Piven Theatre Workshop was a major influence on Sarah, and I’m old enough not to be modest about it,” says Joyce Piven, the organization’s matriarch. “We’re not your corner tap-dance school. We provided an atmosphere conducive to her extraordinary talent, and helped open certain vistas to her. There’s an organic relationship to Sarah’s work, and we’re honored and thrilled she’s doing it here.”