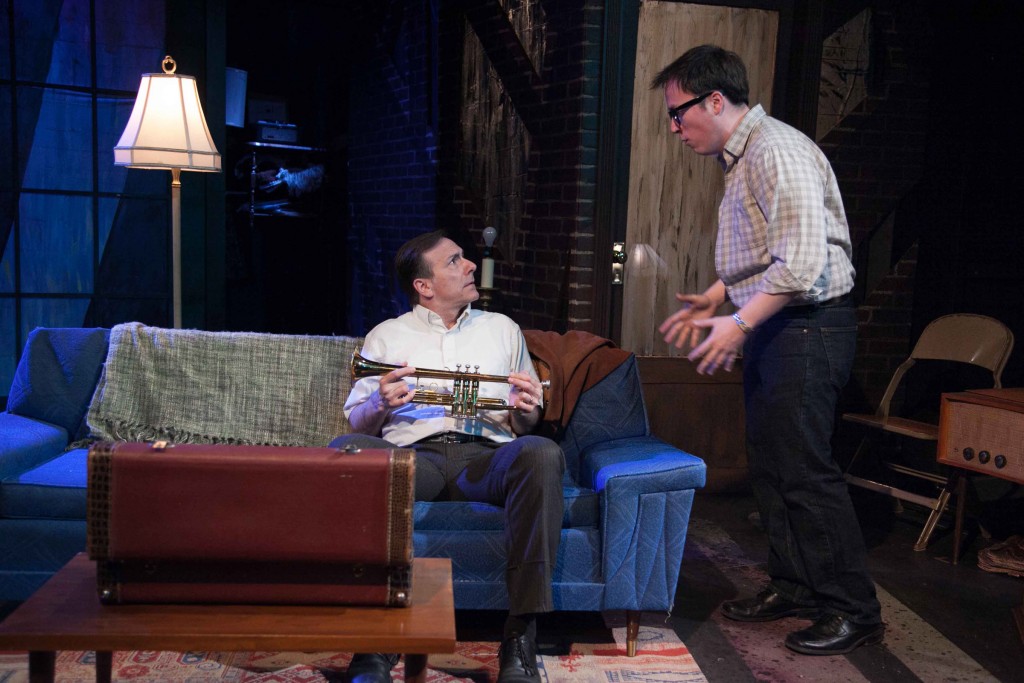 If Neil Simon had written “Laughter on the 23rd Floor” about musicians rather than television writers, the likely result would have resembled Warren Leight’s “Side Man.” The structure is much the same: a solitary young man directly addresses the audience in the opening monologue, he continues to tell of his life and make snarky comments about it, and after some drastic ups and downs, the show closes with another solo moment of breaking the fourth wall. Top the structure off with a few Brooklyn accents, and you’ve got a play that is in the mold of a Simon comedy. And, in American Blues Theater’s current production, you get to see that the script, when thoughtfully treated, contains brilliance equal to those of the emulated master.

Michael Mahler heads the cast as Clifford, the son of a professional trumpet player (the titular “Side Man”), who narrates the glory days of his dad’s successes in the days of swing and big bands. His father (Michael Ehlers) is a carefree artist, who lives off his talents and contacts, never dreaming that the good days will dry up. But, when they do, his marriage falls apart, he lives off unemployment, and he neglects and ignores any options he may have to make life better. Ehlers finds complexity within a character that could easily come off as simple and lazy.

This ensemble seamlessly melds together into a whole that sucks you into their world completely. Instead of merely watching a play, the audience is observing friends who they care about deeply.

Director Jonathan Berry’s staging beautifully realizes a number of ever-shifting locations, making for a tightly packed and absorbing show. Heather Gilbert’s lighting design goes to great lengths to add to the feeling and mood of the world. Her hues and angles are nearly a character unto themselves. This production is the complete package. It brings us directly into Clifford’s world, and we are right there with him when he tells us his tale. (Christopher Kidder-Mostrom)