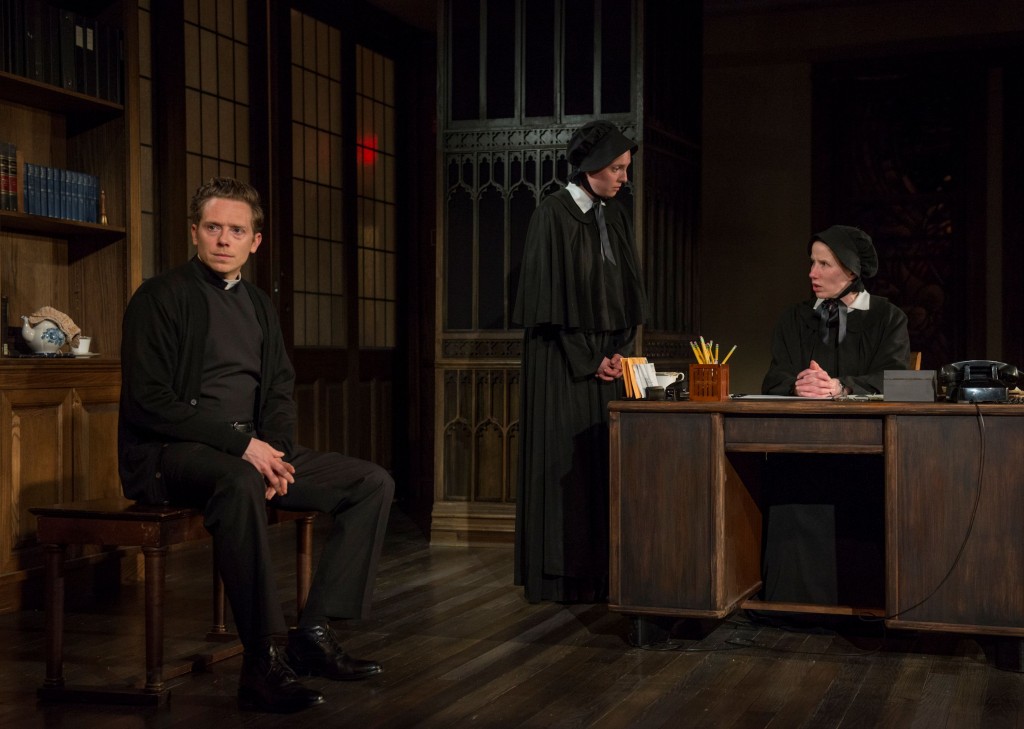 It takes a certain kind of integrity—or perhaps better still, gall—to stage a production of John Patrick Shanley’s “Doubt: A Parable” in an actual church. And while Glencoe Union Church, where Writers Theatre has temporarily taken residence, is not outwardly comparable to the co-ed Catholic school where Shanley’s morality tale is set, the gesture should not be lost on anyone.

With Kevin Depinet’s exquisite stage design complementing the natural serenity of the space, this reverent production seeks to be worthy of Shanley’s complicated and characteristically combative interrogation of faith and duty. It succeeds on the integrity of its ensemble, a fearless quartet that is prepared to sacrifice equanimity in the pursuit of virtuous theater.

Under the guidance of director William Brown, the scene work here is the main event. In any play intention is everything. Here, even the most confrontational moments are dealt with, in typical Catholic fashion, indirectly, demanding composure and self-possession especially in moments of profound ambiguity.

This cast achieves maximum affect through minimum physical expenditure. As Mrs. Muller, the smallest but most politically and socially incisive role in the play, Ann Joseph is capable of commanding the stage without ever leaving her feet.

That’s not to say the production spares on sweat and spittle, but “Doubt” is, at its most essential, a spiritual play; the real toll is on the soul. The play’s all too mortal trinity of Father Flynn (Steve Haggard), Sister James (Eliza Stoughton) and Sister Aloysius (Karen Janes Woditsch) carve out irreparable rifts between each other and within themselves. The latter in particular is as vicious and cagey as any of the playground progeny in her keep. Ten years and one star-studded film adaptation later, their disunity continues to reverberate as trust in religious institutions wanes and inter-faith oppositions further insulate factions of the devout.

With Shanley it’s always a fight and “Doubt” lands like a series of blows to the heart and head respectively. To be a true competitor, this production could stand to be a little quicker on its feet and needs a bit more endurance to power all the way through to its stirring irresolution. I have every faith they’ll get there. (Kevin Greene)