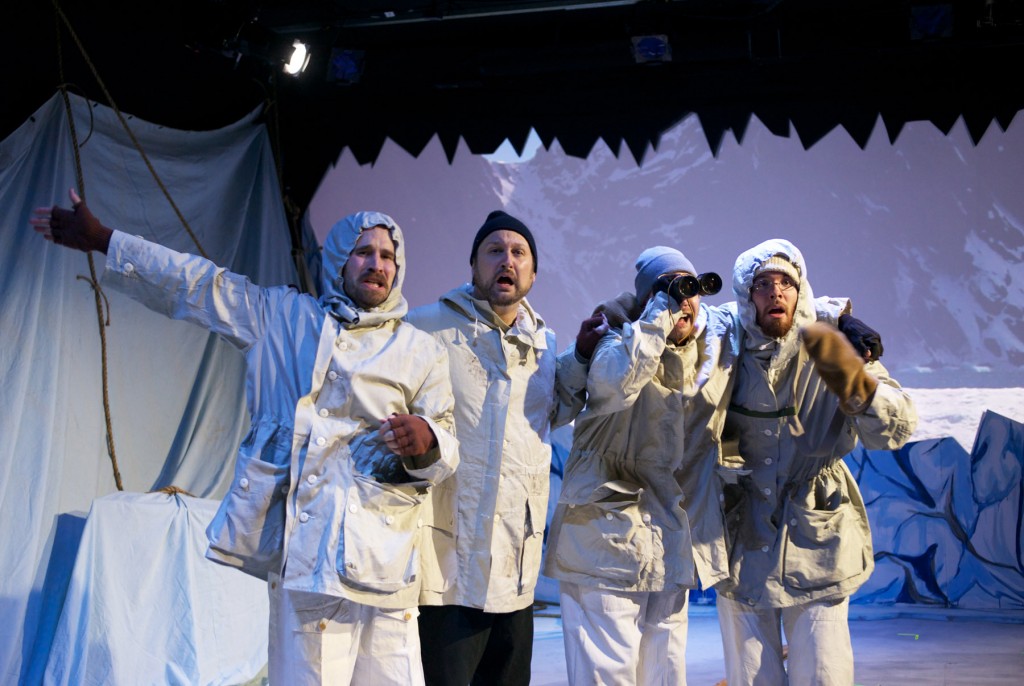 I spent some time after I left Irish Theatre of Chicago’s “The White Road” thinking about how I would have fared. The play chronicles the famous 1914 Shackleton expedition—an attempt to cross Antarctica that ended… poorly. Stranded on the ice floes, their ship crushed and useless, Ernest Shackleton and his crew were forced to attempt an unimaginable journey homeward. The play does an astounding job of capturing the physical toll these men suffered and the mental grit necessary for them to keep going—across hundreds of miles of ice dead-ending in the open ocean.

The play is a rare world premiere for the Irish Theatre of Chicago—formerly Seanachai Theatre Company. It is written by founding member Karen Tarjan and based on historical accounts from the crew members. Featuring a tumult of different voices—English, Irish, Australian, Welsh—the play occasionally trips over itself in its first act. Between the ten-person cast, the various set pieces and the needs of the story to cover months and months of time, there is a lot of clutter. As the good ship Endurance moves ever closer to Antarctica, the play becomes herkier and jerkier. Director Robert Kauzlaric’s numerous light cues, wholesale scene changes and constant silhouetting of sailor testimonials adds to the chaos.

But once the ship becomes irreparably stuck and the crew must abandon her, the play finds itself. All its different elements—script, direction, performances—snap into place. The Endurance is replaced by actual endurance and the result is thrilling.

The entire cast deserves much credit for this effect. Their heaving and shuffling and mumbling line deliveries tell volumes about mental and physical deterioration—more than first-person accounts ever could. Gage Wallace, Kevin Theis and Michael McKeogh all give standout performances as various crew members, while Paul Dunckel brings equal parts warmth and stoicism to Shackleton. He makes you believe not only that these men would follow him to the ends of the earth, but that he was capable of leading them back.

I’m pretty sure I would have died, by the way. Like immediately. Just laid down and expired. (Alex Huntsberger)

The Irish Theatre of Chicago at The Den Theatre, 1333 North Milwaukee, irishtheatreofchicago.org, $26-$30, Through June 13.