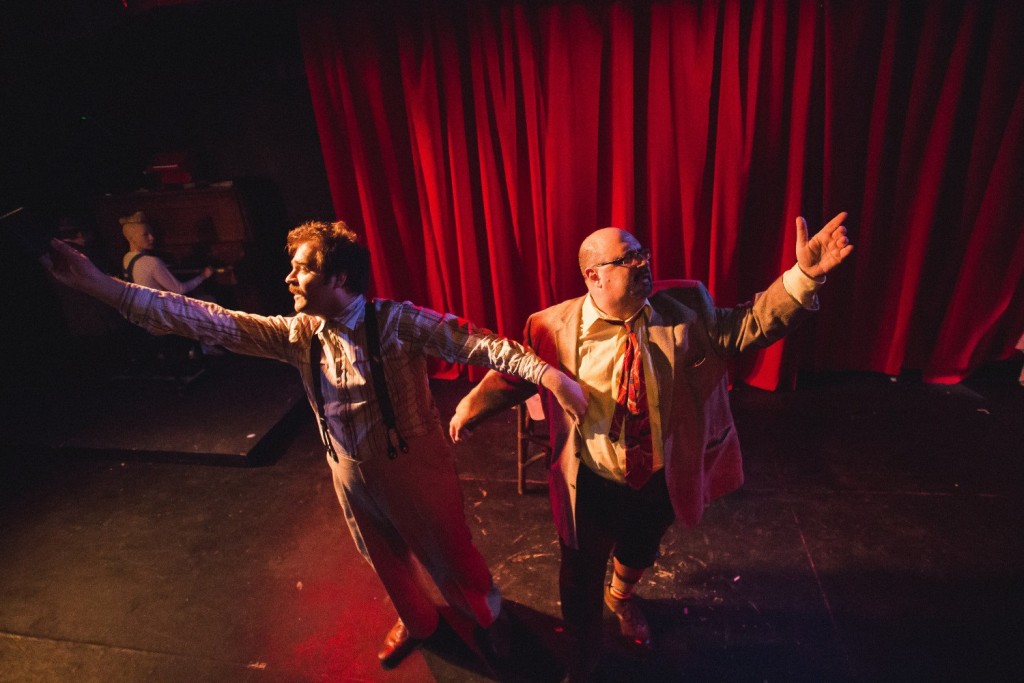 If all theater is a lie, as repeatedly asserted by co-creators Dan Kerr-Hobert and Phil Ridarelli, then “Trust Us/ Screw You” is a masterpiece of manipulation. It is also an insightful little piece that illuminates audiences to a world where a “mark” (victim) might spend a “sawbuck” (ten-dollar bill) on a gold-colored brick before telling his tale of woe to a “button” (a cop in on the scam). Kerr-Hobert and Ridarelli illustrate this and similar cons on unsuspecting audience members who then trade their money or wallet or watch for a deposit slip which they may or may not be allowed to redeem at the end of the night. Will everyone get their riches back in the end? To tell you might ruin the ending but, then again, the show does run through June.

Kerr-Hobert and Ridarelli have done their homework, resulting in an interesting and entertaining glimpse into the art of the con with two actors perfect in their roles as confidence men. Along the way they also introduce colorful characters like Joseph “Yellow Kid” Weil and the originator of the Ponzi scheme, Charles Ponzi. True to the spirit of the production, not everything here, or everyone in the audience, is exactly as they seem. Also fun is the musical score with composer, musical director and musician John Szymanski providing, along with musicians Curtis Williams and Alisa “Plucky” Rosenthal, a sometimes manic, always well-timed pace to the on-stage swindling.

Not everything on stage works exactly as planned and at times this ninety-minute piece can feel a bit long. A few touches, such as having an audience member leave the theater, also feel more gimmicky than entertaining. But the production has enough silliness and heart to make this a worthwhile investment. And when Kerr-Hobert and Ridarelli discuss their own experiences with being taken, along with the shifting nature of today’s multi-billion dollar Ponzi schemes from the well-heeled to the working class, “Trust Us/Screw You” feels more like a title describing today’s marketplace than a Neo-Futurists show. (Noel Schecter)