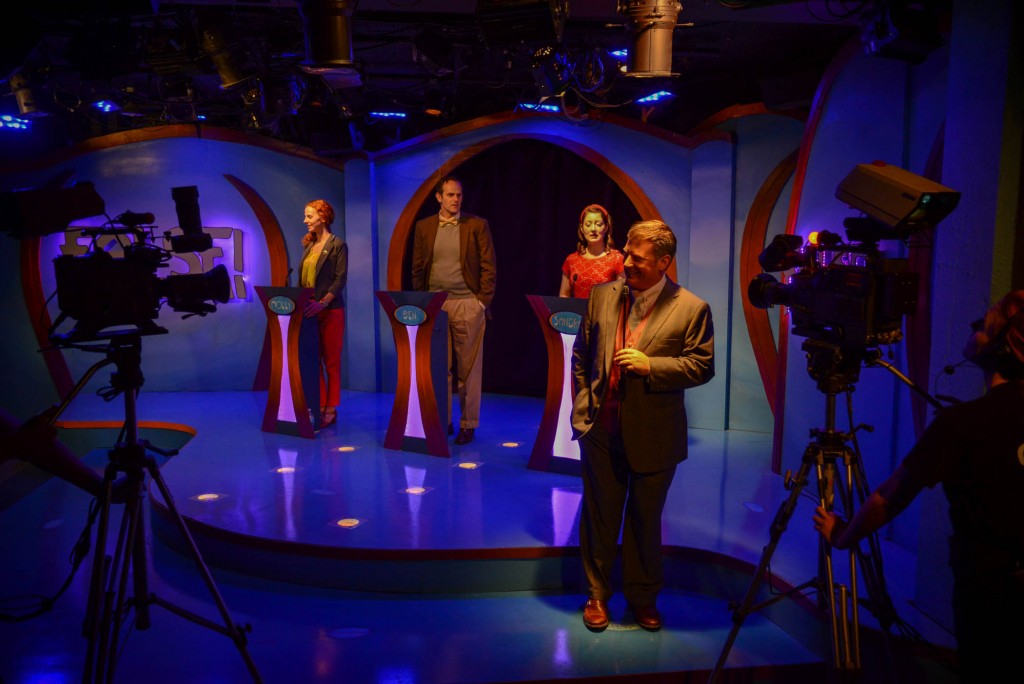 “You are all complicit in our little adventure,” intones the smarmy MC of the hit game show “False,” where “perception is reality.” Indeed, viewers become part of the act in British playwright Rob Drummond’s darkly riveting examination of celebrity culture, transformed into a submissive, infantilized studio audience that applauds and chants the show’s mantra—“the truth can be cruel”—on cue. But over the course of the play’s ninety minutes, these seemingly innocent rituals of engineered enthusiasm turn hollow and strange, as the game becomes deadly serious.

Obviously inspired by the Jimmy Savile scandal in England, in which a media personality was revealed posthumously as a serial sexual predator, “Quiz Show” expands the celeb-gone-bad premise into a many-leveled meditation on repressed memories, denial and social complicity. The Jimmy Savile story isn’t widely known hereabouts, but our own examples of willed blindness—such as the Jerry Sandusky case at Penn State, pedophile priests and the CPD’s Jon Burge—differ only in details. As one quiz show contestant declares, “The perfect conspiracy happens in the collective subconscious of a nation.”

With the aid of a pitch-perfect cast, director Max Truax crafts a slightly off-kilter studio world that morphs into a haunted, metaphorical dreamscape. Anderson Lawfer’s quizmaster shifts from glib amiability to sweaty desperation in a blink, while Paul Fagen and Nikki Klix deliver the right over-intensity as contestants with more at stake than cash and prizes. But it is Sarah Goeden who stands out most in her portrayal of the enigmatic contestant Sandra, skillfully conveying the hidden dimensions behind Sandra’s jittery, eager-to-please screen persona. Also praiseworthy are Mike Mroch’s and John Kelly’s cold and claustrophobic set and lighting, complemented by sound designer Heath Hays’ evocative use of tinny, disembodied voices.

Like a cubist painting, Drummond’s script presents all angles of the story simultaneously, obligating the viewer to discover the underlying narrative beneath the showbiz veneer. The ending has a bit too much of the sermon, but the play as a whole packs a wallop, reminding us that in choosing to see some things and not others, we become not just passive spectators but co-conspirators. Yes, the truth can be cruel—but it alone sets us free. (Hugh Iglarsh)