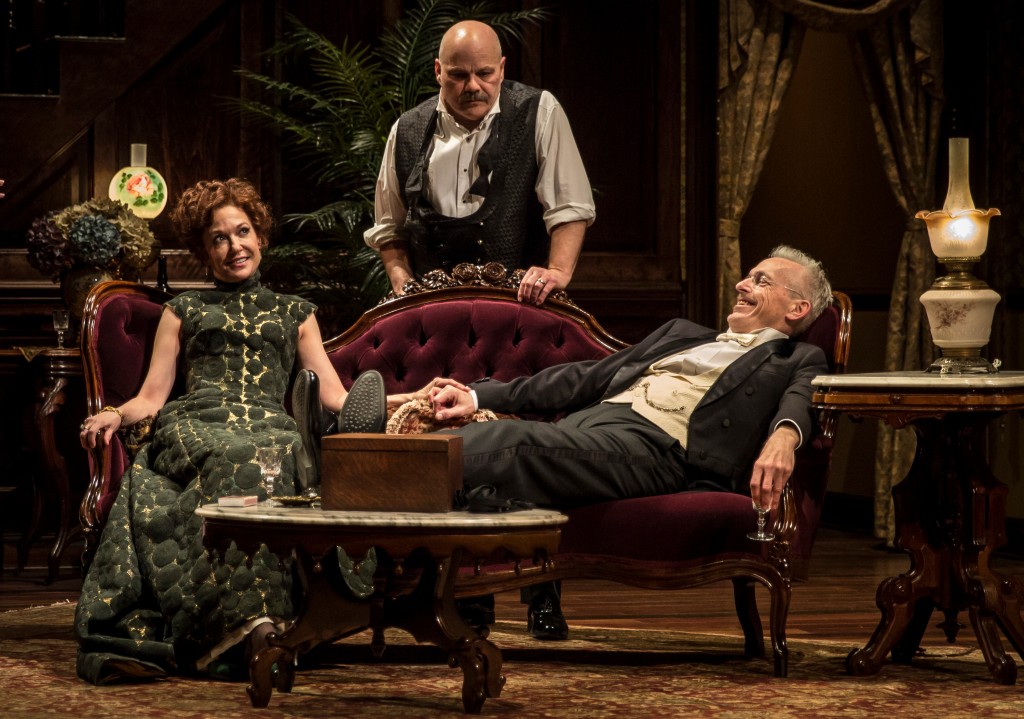 There is nothing little about Lillian Hellman’s 1939 potboiler “The Little Foxes.” The characters, the drama, the incestuous pairing of family and greed, it is all larger than life. Director Henry Wishcamper’s new revival at the Goodman, one with a knockout cast, doesn’t try to make the play smaller or more human than it is. This is a play about monsters—Southern, wealthy, money-grubbing monsters. Best to get out of the way and let them fight.

Set at the turn of the century, “The Little Foxes” opens on a dinner party being hosted by the Hubbard siblings: Regina (Shannon Cochran), Ben (Larry Yando) and Oscar (Steve Pickering). They have enticed a wealthy northerner (Michael Canavan) to partner with them on a cotton mill and, since they own most of the cotton in town, this mill is going to make them filthy rich. However, Regina’s share actually belongs to her absent husband Horace (John Judd) who might not play along, so Regina sends her daughter Zan (Rae Gray) to Baltimore to fetch him. This sets in motion a series of betrayals and counter betrayals that unfold luxuriously over the play’s nearly three-hour running time.

Cochran and Yando are the show’s main event, with Judd as a formidable under card alongside Mary Beth Fisher as Oscar’s fraying, alcoholic wife. Cochran is a steam engine of grievance and ambition against Yando’s soft, 1,000-thread count menace. They are the evening’s sublime yin and yang (if yin and yang were both totally evil).

If Wishcamper’s production were an episode of “Sesame Street,” then the word of the day would be “Sumptuous.” Todd Rosenthal’s set is a gorgeous cherry-wood-lined tomb lit with sickly warmth by lighting designer David Lander. Jenny Mannis’ costumes are likewise exquisitely appointed. But the real standout element is Richard Woodbury’s score: screeching horror movie strings that open and close each act.

This production is not a subtle one, but neither is the play. It is a Grand Guignol Marxist melodrama—a Lamborghini doing 110 in a school zone dangerously out of control—and it’s to Wishcamper’s credit that he steers wisely into the skid. (Alex Huntsberger)