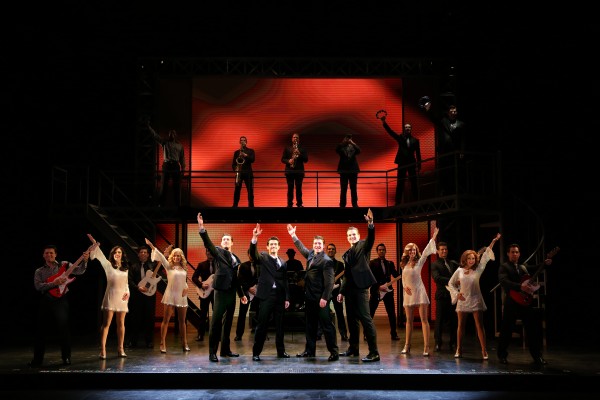 The Baby Boomers grew up in one of the longest periods of affluence in American history, lulled by a soundtrack of Elvis, Johnny Cash, ABBA and Frankie Valli. The Great Recession of 2007/9 caused a recalibration of retirement plans for many. The arts, always the last bastion to recover from a sweeping financial crisis, needed to streamline their product. If the Boomers wanted to regroup to the tunes of their youth, while theater producers looked to create musicals without singing-and-dancing choruses, with singers/instrumentalists providing their own accompaniment, the answer was the “jukebox musical.” These thrifty shows make use of previously popular songs, recorded by either a solo artist or a group, knit together by a documentary-style script, or by slipping the tunes into a new storyline. “All Shook Up” and “Ring of Fire” are ubiquitous in regional theaters the country over, and “Mamma Mia” spawned a Meryl Streep-led movie, and is only this fall closing on Broadway after fourteen years.

One of the most popular of these pieces, “Jersey Boys,” dramatizes the history of Frankie Valli, from before-to-after The Four Seasons. A fast-moving docu-concert that features such immortal tunes as “Sherry,” “Big Girls Don’t Cry,” Walk Like A Man,” “Can’t Take My Eyes Off You” and “December ’63/Oh What A Night,” the current Broadway touring production offers the solid, quadruple-threat performances of four fellas and a tireless drummer. The arc of the story is kept clean by truncating the tunes, and juxtaposing them against dialogue, with the big finales carefully placed at just the right moment for the crowds to go wild. And they do. This show has glitz and glamour to appeal both to theater aficionados, and new theater-goers, lured in by the promise of a rock concert with cocktails instead of kegs.