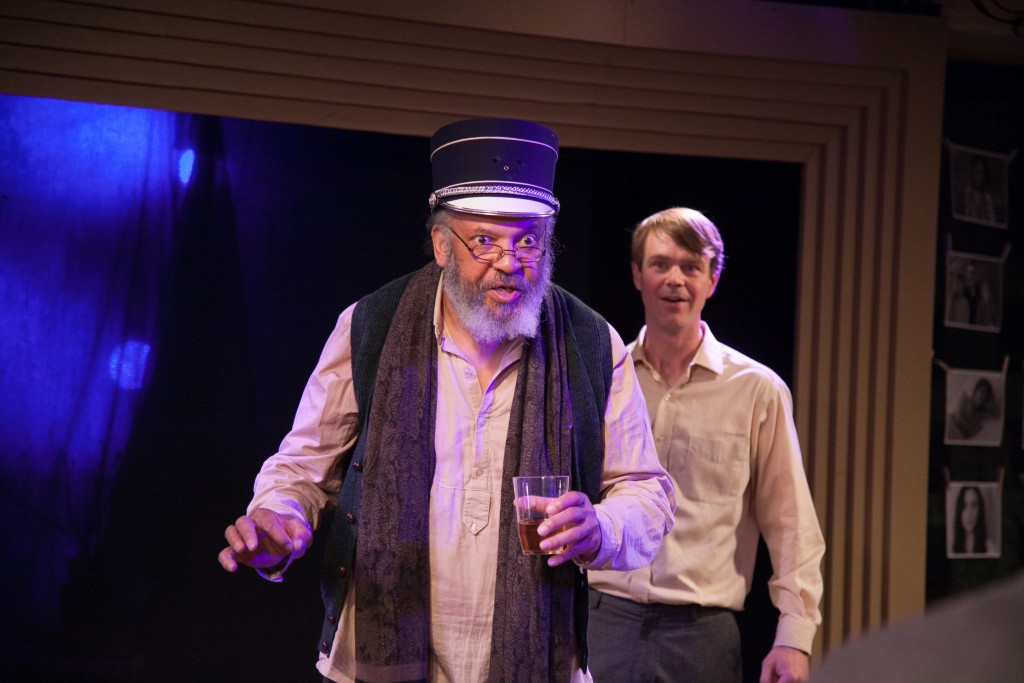 “The Wild Duck” is an incomparable masterpiece. Nearly one-hundred-and-twenty years ago, George Bernard Shaw wrote, “Where shall I find an epithet magnificent enough for ‘The Wild Duck!’” At the Halcyon Theatre Friday night, I saw what purported to be Ibsen’s tragedy. It was a caricature, acted by persons who knew nothing of its terror, power and comedy—had no inkling of its perfection in technical detail, stage direction, speech and gesture, and its uncanny economy of means. The actors were innocent of what took place.

I ask director Tony Adams, his assistant directors, Claire Reinhart and Laura Stephenson, and the dramaturge, Carla Della Gatta, ‘What were you thinking? What possessed you? Why remake Gina Ekdal into a nineteenth-century proto-feminist? Did it occur to you that by so doing you destroyed the argument Ibsen built to expose the sentimental, self-pitying, idealist follies of two male fools? That you indulged yourselves in the false idealism he spent his wisdom and common sense to annihilate?’

Perhaps you thought you were protecting Ibsen’s reputation as a herald of feminism? Did you tell yourselves that by making Gina a repressed artist ahead of her time, a closet feminist photographer capable of persuading engaged couples to shed their clothes, you were doing what Ibsen would have done if he lived in our times?

If so, you were wrong. You ruined the play. Ibsen’s Gina is slow, stolid, ignorant, a Mrs. Malaprop (imitating her “intellectual” husband) who believes in every social construct you (and I) find abhorrent: Male superiority and dominance, the wife’s duty to feed her husband’s illusions, her loving obedience to husbandly whims—all of it. True, Gina loves well, knows reality and talks common sense. That should have been enough.

“The Wild Duck” needed neither the irrelevant musical interludes nor the anachronistic nudity. Both wrecked the absorption of the audience into the horror-comedy of Gregers and Hialmar’s self-love and their pathetic phrase-making. This is the heart of the play: How “the claims of the ideal” (not “the demands of justice”) lead to misery, idleness, and death.

The performance failed as a tragedy, a comedy—and a “musical.” (Bill Sweetland)

alas mr. sweetland has confused his own perceptions, albeit supremely fine tuned tho they may be, for those who produced, directed and put on the play. in “updating” an old work, play makers do us a great favor- they attempt to keep the drama relevant. the germans call it dramaturgy, the considerable art of taking an old work and revealing it as something that speaks directly to our own time: brecht and piscator were masters of the art. and mr. sweetland reveals just a wee bit of the philistein- when he notes there was, horrors, even some nudity.

Warren, I saw the production. There is a difference between updating a play and destroying it. My very first question upon completion of the play was “where was the friggin’ dramaturg?” I’m left with two possibilities: A) the person with that title doesn’t know what that job means or B) the director refused to heed their protestations. Listen, far be it from me to agree with a critical review when I know how hard people work to get an audience and to create something they care so much about, but Mr. Sweetland is spot on. The play made NO sense… Read more »